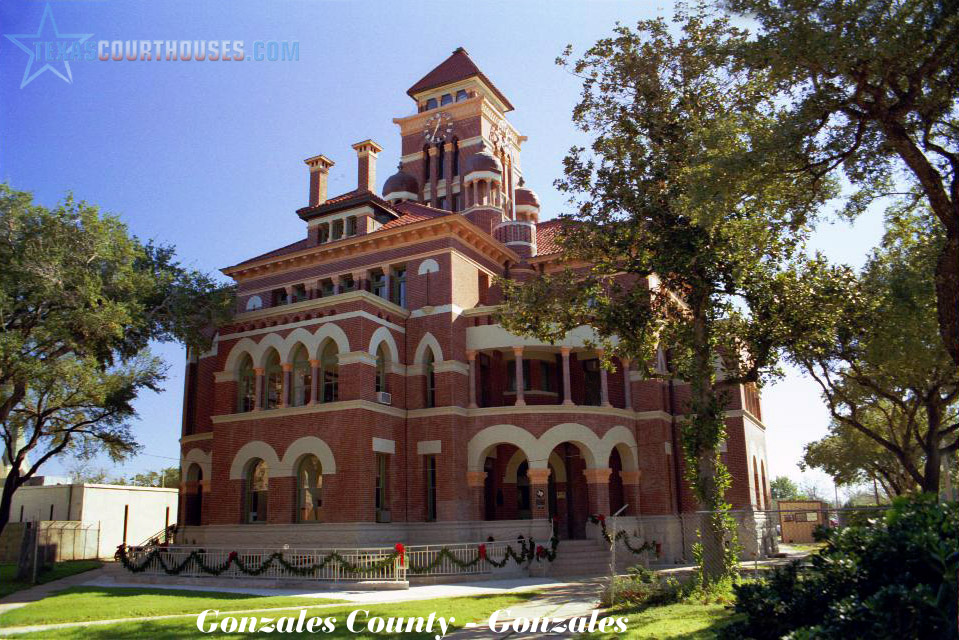 Building Completion Date: 1896
County Seat: Gonzales
Present Status: Existing. Active.
Architect: James Riely Gordon
Architectural Style: Romanesque Revival
General Contractor: Otto P. Kroeger
Building Materials/Description: The Gonzales County Courthouse, designed by J. Riely Gordon in the Romanesque Revival style, was constructed in 1896at a cost of $64,450. The building is cruciform in plan with four semicircular entrance bays filling in the four corners of the cross. The two main…-Remodeled in 1958. Original slate and tin roofs were replaced with Spanish tile. 1996-John Volz preparing plans for full exterior restoration. – ISTEA Grant – Repairing and replacing the roof; rebuilding gutters and downspouts;
National Register Narrative: The Gonzales County Courthouse is a red brick three- story eclectic Romasnesque Revival structure with white limestone trim. The building is cruciform in plan with four semicircular entrance bays filling in the four corners of the cross which give a blocky, massive quality to the form. There is a central tower above a red tile hip roof.
The basement is raised and of rusticated limestone. The windows are grouped with piers or columns marking the divisions and are given various treatments; flat lintels, Roman arches, and Gothic arches, all with emphatic limestone lintels and architraves. The two main entrance bays have open Roman arcades at the first level and open galleries with colonnades at the second topped by wide limestone bands and open brick parapets. Limestone stringcourses divide the stories. One circular bay at the rear has its second story treated as a piano nobile with very tall round arched windows with three lights. The windows in the rest of the building are of the one over one double hung sash type.
The tower is square in plan and is flanked by four open cupolas with colonnades and stilted domes. Each side of the tower has three narrow Gothic windows and the four clocks of the tower have transparent faces superimposed over the brick archivolts of the windows and limestone cornice. The corners of the cornice boast four gargoyle water spouts. An open colonnaded belvedere with a pyramidal red tile roof crowns the tower.
Gonzales served as the capital of Empresario Green DeWitt’s colony from 1825 to 1836. Since 1837, it has been the county seat of Gonzales County. A proud self-image is reflected in the architecture of its courthouse. The style reflects the taste which prevailed in the late nineteenth century; it speaks of an era during which newly wealthy cattlemen trailed their herds north, and built some of the most opulent homes in Gonzales.
Prior to the age of the opulent mansions in Gonzales, the courthouse had been “practically the community center,…the site of all religious services before the various churches were built, and … the scene of social gatherings.” (Tolson, p.77) In addition, the courthouse was much in use for its formal purpose, the enforcement of law. The famous and violent local vendettas such as the Sutton- Taylor feud, the Littlefield-Martin feud, and the gun- notching escapades of John Wesley Hardin were more or less settled by the time the courthouse was built in 1896. However, the atmosphere was still violent. In 1899, “a leading doctor seriously cut with a pocket knife a man who accosted him with a barrage of ugly names… and a multiple shooting on a downtown street involved several prominent families.” (Tolson, p.89)
The first Gonzales courthouse burned on December 3, 1893, and the construction of a second building began in 1894. The building of the new courthouse provoked cries of political scandal. Debt-ridden farmers had been seeking a political voice for many years, and in the 1890s they rallied to the Populist ticket. Indeed, the general election of 1892 disclosed that a three-party system prevailed in Gonzales. Outvoted Democrats claimed that the Populist county officials had pocketed some of the money appropriated for thenew courthouse, had kicked back some of the appropriation to Populist friends, and had awarded the contract on political considerations rather than on the basis of the best bids.
Whatever the truth may have been, the contract was let on June 26, 1894, to Otton P. Kroeger of San Antonio. The structure cost $64,450; it was completed on April 8, 1896. The brick from the building is said to have been freighted from St. Louis; the rock came from a quarry at Maurin, a few miles from Gonzales.
The building was extensively repaired in 1958. Improvements included a new roof and waterproofing. 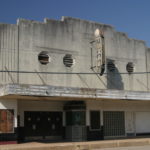