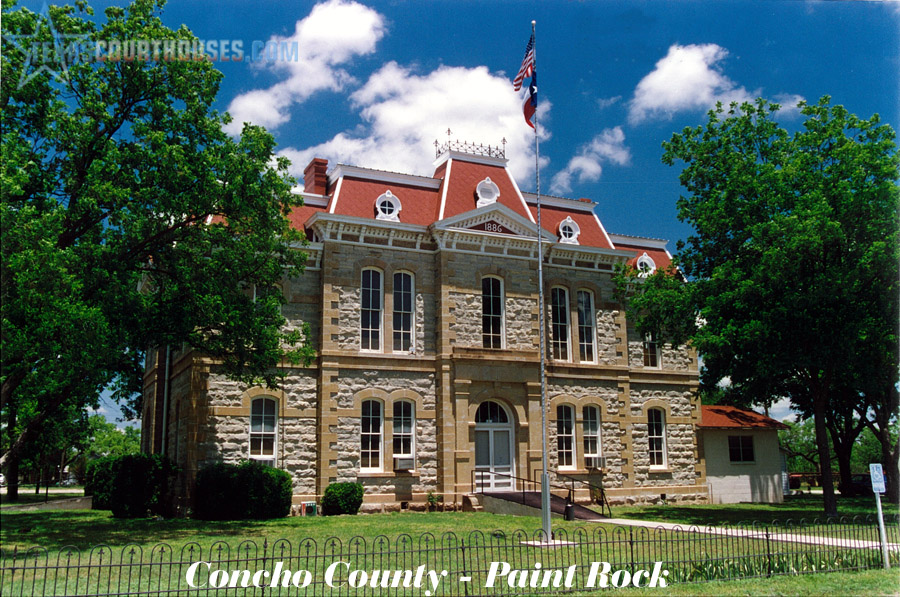 The Concho County courthouse designed by architect, F.E. Ruffini and built in 1886 under the supervision of his brother Oscar, is a two-story structure of native stone. Built in the Second Empire style much favored for public buildings of the period, its dominant visual feature is its characteristic Mansard roof, treated with much greater elaboration than some of its contemporaries such as F.E. Ruffini’s Blanco County Courthouse. The roof rises in three sections featuring elegantly enframed circular dormers, contrasting cornice and trim, all of galvanized iron, and wrought iron cresting over the entry pavilion.
At each elevation the entrances are emphasized by a triangular pediment from which a Mansard-roofed pavilion rises. Projecting bays flank the north and south entries with cornices slightly higher than the adjacent wall surfaces. The walls are laid up in cream-colored ashlar masonry with substantial cut stone quoins and a string course between floors. A wide cornice is carried on ornamental brackets. Tall, narrow windows are capped with stilted arches of cut stone and a cut stone string course runs from the base of the arch and the band across the facade.

The courthouse is laid out on the traditional cross axial plan with wide corridors that divide the ground floor into four equal quadrants. The disposition of the interior spaces follows the massing of the outside walls. Offices and storage were allocated in the original plan to the county and district clerks, sheriff, county treasurer, tax assessor, surveyor, county judge and chambers for the commissioners’ court. Stairways at either side of the east west hall rise simply to a graceful curve at the top. The second floor is occupied by an imposingly scaled courtroom and several jury rooms. Much historic detail is preserved in the interior finish particularly in the pressed metal ceilings and handsome wooden staircase.

In 1842 Henry Francis Fisher and Burchard Miller received a contract for colonization of the Concho area, but it was still under the domination of the Apache and no important settlement was made until the 1870’s. Concho County was attached to McCulloch County for judicial purposes until its incorporation on March 11, 1879. Paint Rock became the county seat although in 1880 it only had a population of 100 persons.

On October 5, 1885 the commissioners’ court received bids for the construction of the first permanent courthouse in Concho County. Plans and specifications for a two-story building of native stone in the Second Empire style were prepared by architect F.E. Ruffini of Austin and accepted by the county. J.B. Kane and John Cormack under the firm name of Kane and Cormack Contractors and Builders posted a bond for $20,000 and entered into a contract with Concho County to furnish materials and labor in the construction of a new courthouse. Bonds for $28,000 at 8% interest were issued to fund the project. In the meantime, F.E. Ruffini had died and on October 29, 1885 his brother, architect Oscar Ruffini of San Angelo, was named by the commissioners’ court as supervising architect.

The brothers Ruffini were both prominent in Texas architecture during the later part of the nineteenth century. Born in Cleveland, Ohio, of immigrant parents, they received their architectural training in firms in Ohio and Indiana. In 1876, F.E. Ruffini opened an office in Austin, where two years later he was joined by his brother. Before becoming established in Austin, Oscar worked for a time in the firm of E.E. Myers of Detroit, Michigan, the architect of the Texas state capitol. In 1884, Oscar moved to San Angelo.

Apart from such work as F.E. Ruffini’s design for the old main building for the University of Texas, the brothers were known chiefly as designers of courthouses. By the mid- 1880’s they had developed a full-blown architectural vocabulary for this building type. Oscar Ruffini’s Sutton County Courthouse (1891), and F.E. Ruffini’s Blanco County Courthouse (1885), exemplified the style which appeared in a somewhat more decoratively evolved form in the Concho County Courthouse. While a high central tower was usual on many nineteenth century courthouses, the Ruffini’s developed the Mansard roof of the Second Empire style as a dominant visual element in a composition lacking a tower. Also in contrast to the complicated massing of recessed bays and projecting pavilions usually encountered, the Ruffini’s substituted a simpler geometry of superimposed elements in the facades.

By March 17, 1886 construction on the Concho County Courthouse was almost completed, and at that time the commissioners’ court contracted the firm of Thomas Kane and Company of Chicago to furnish the courthouse for a sum of $1,212.00.

On June 21, 1886, Oscar Ruffini made his final report to the county commissioners stating that the wrought iron cresting above the entrance pavilion was yet to receive one coat of black paint.
Despite its small population, Paint Rock continues to serve as the county seat of Concho county and the courthouse remains in use with relatively few modifications of the architectural fabric. 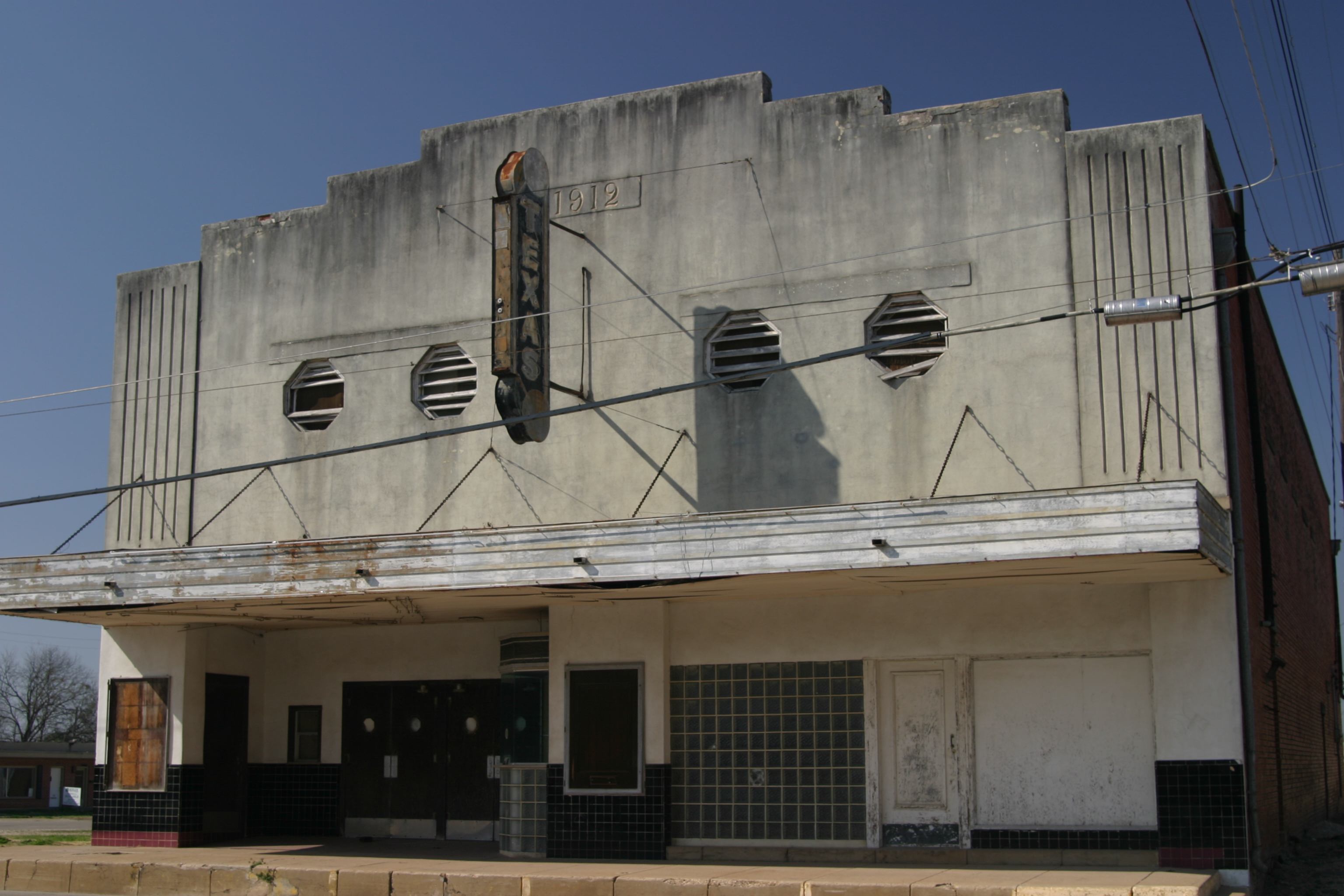 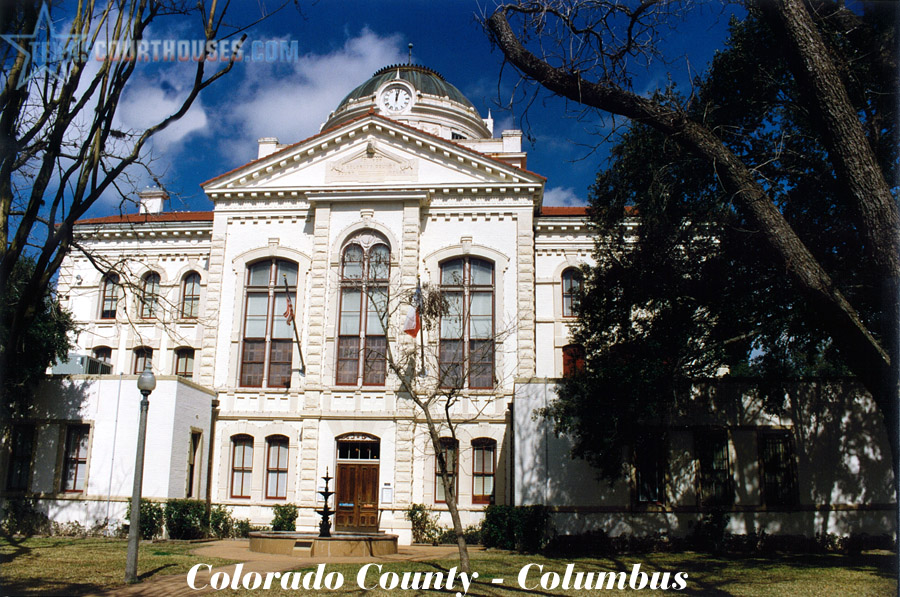