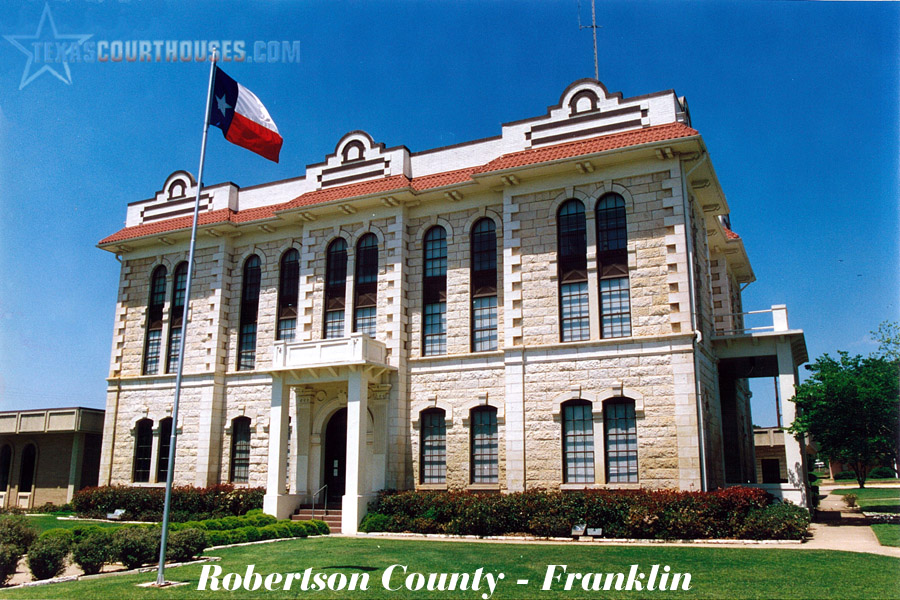 The present Robertson County Courthouse was designed on a classical Texas plan in Second Empire style by architect F.E. Ruffini, who employed this mode in numerous other courthouses.

The exterior dimensions of the building are 81 feet, 11 inches by 66 feet, 5 inches. Specifications called for the first story to be 13 feet high; the second to be 11 feet with a courtroom height of 20 feet; and the third story was to be 12 feet in the clear.

In rectangular form, the plan was zoned for offices on the ground level and district courtroom on the second. Two corridors intersecting in the center provided circulation to the offices. The courtroom was a two-story space centered on the second floor. Offices located in the pavilions occupied the third level space not in the upper section of the cortroom. Remodeling has changed the locations of several of the interior walls.

When completed, the courthouse was an outstanding example of Second Empire style. The south (main) facade is a five-part composition with corner pavilions, center pavilion, and connecting components all crowned with Mansardic roofs relieved with dormers made of galvanized iron. Rising above the center was a triangular pediment surmounted by a Mansardic roof with convex curvature, containing clocks. The cast and west fronts are comprised of three part compositions, also originally crowded with Mansardic roofs. The north facade consists of one prominent mass flanked by pavilions.

The exterior masonry work is noteworthy. Above a foundation of rubble stone set with lime mortar all the rock work, except the trim, was pitched-faced in ashlar pattern. Door and window jambs were smooth cut stone with one and one- fourth inch margins.

The Renaissance stylistic vocabulary was fully exploited in the details. On the ground story cut stone pilasters enframe the walls of the pavilions. On this level windows containing double-hung sashes are spanned with stilted arches with pronounced keystones. The south entrance is marked by a Roman arch with cut stone voussoirs. This was originally flanked by pilasters with Corinthianesque capitals which are now gone. These supported an entablature and balcony which also have been removed. Other doorways were spanned with stilted arches. A cut stone stringcourse separated the base-story walls from the upper level walls.

Designed as compositional units, the exterior walls of the courtroom and the flanking two levels of offices continued the Renaissance theme. Pronounced cut-stone quoins contrasted with the pitched-faced ashlar masonry — as below. Openings on this level are spanned with Roman arches of cut stone comprised of four voussoirs and a pronounced keystone. Windows originally rising uninterrupted for two stories in the center three openings of the south side expressed the courtroom space while spandrels in the openings of the pavilions express the multilevel arrangement of offices.

Sheet metal was used extensively on the exterior both Emoctionaly and decoratively. A heavy galvanized-iron cornice featuring prominent modillion terminated the walls. Two pediments were also fabricated from this material as were the dormer windows. Galvanized iron also was employed the chimney caps and down spouts. Stamped zinc was specified for several other ornamental features. The flat decks of the roofs and roofs of the pediments were all covered with tin. However, for the steep sides of the Mansard roofs, dark colored slate from Vermont or Virginia was specified.

Although none of several Robertson County Courthouse was ever damaged by flames, Ruffini was familiar with losses from fire in other counties and provided record. The vaults are built entirely of bricks. Double walls with an airspace between provide insulation against intense heat. Each masonry vault records is covered with a barrel vault of semicircular cross-sectional profile, and floors were finished with hard pavince brick.

Other interior details are also noteworthy. Hung on iron acorn-tipped butts, the doors are pine with four panels and bronze knobs. Ventilation of the interior spaces was facilitated by transoms located above these doors.

The wooden trim of the interior was typical of the period. For the stairways, specifications called for octagonal newel posts, balusters, and handrails to be black walnut. Pine was used throughout for other interior millwork. The courtroom and halls were wainscoted to a height of three feet with narrow matched and beaded “ceiling stuff” capped with a molding.

Changes in the exterior include the removal of all the original roofs and cornices. These have been replaced by parapets and overhangs covered with tile, all suggesting Spanish Renaissance character. On the south the entrance has been simplified in design and a porch has been added on the east. An annex with ransom ashlar mansonry walls has been made on the north and west. This should be excluded from National Register status.

Localed on the northwest corner of the square, the jail was on a T-shaped plan. The main secion (bar of the T) of the jail is 49 feet wide and 20 feet deep. The groundfloor story height is 12feet in the clear. On the ground floor a central hall provides circulation to the kitchen, a large room (parlor?), and the cell rooms. Containing cells, the second story of this section is 11 feet clear. Facilitating segreagtion of prisoners a rear extension (stem of the T) is 27 feet wide an d36 feet deep with 18 feet clear from floor to ceiling. Cells 7 feet by 8 by 7 are of hardened iron and steel, “saw and file proof,” manufactured the P. J. Pauly Jail Building and Manufacturing Company of Louis, Missouri. These were moved from an old jail in Calvert. In addition the other miscellaneous iron work was reused.

As in the courthouse, the walls of the jail were pitched faced ashlar. While the design of the buiding is relatively straightforward subtle details enhance the work. On the second floor of the main section opening are spanned by lintels; on the ground story stilted arches span the openings. Simple lintels also span openings of the rear extension.

Other decorative details enhance the main building. Pilasters of cut stone emphasize the corners. These terminated under a cornice with heavy brackets.

Several additions have been made to the jail. These include a porch on the south an a new brick wing located on the west These additions should be excluded from National Register status.

The Robertson County Courthouse and Jail posses both architectural and historical significance. Although remodeled, the courthouse still displays much of the original detail work of a fine Second Empire style building. Situated on a public square in the center of the community, these structures historically have served the governmental functions of the county throughout the twentieth century.

Located in East Central Texas, Robertson County was organizaed in 1838, during the period in which Texas was a republic. It was named for Sterling C. Robertson, an impresario and signer of the Texas Declaration of Independence, and originally included a considerable amount of land that is now a part of surrounding counties. The present county boundaries were established in 1846.

As often happened in Texas, the location of the Robertson county seat was changed several times. The original location was Old Franklin, but the county seat was moved to the town of Wheelock in 1850, after the present boundaries were established. However, since this community was near the southern county line, it was not favorably located to serve county government. Following an election in 1854, wherein residents voted upon the county seat question, the site of government was transferred to Owensville and in 1870, by an act of legislature, it was moved to Calvert. Then in 1879, county government was moved to Morgan, a town that had been established in 1871, adjacent to the International-Great Northern Railroad and the town name was changed to Franklin. The seat of government has remained permanently in this community which is near the geographical center of the county. Today the population of Franklin is over 1,000.

In 1855, while continuing to hold their meetings in Wheelock, a new courthouse in Owensville was contracted with A.L. Brigance, who, at the time, was also the chief justice. The work on this building was completed the following year. In 1856, a lot in Owensville was set aside for a jail and the old courthouse in Wheelock was sold, after which county government was officially transferred to the new courthouse in Owensville. A jail which also had been contracted with James b. Grant and Alexander Calvert in 1855 was also completed in 1856. during the following year, an oak fence evidently was placed around the public square and several contracts were awarded for repairs to both the courthouse and jail. In 1869, money was set aside to purchase shingles and lumber to repair the courthouse and bids were requested for a new jail, but these were laid aside since the seat of government was moved to Calvert.

After moving to the new location, a house was rented for $50.00 per month to house the clerk’s offices. In 1879, Court was hold in an unidentified building with floors covered was sawdust. Meanwhile, new construction on both a courthouse and a jail was delayed. In 1876, the county the second story of a brick building (evidently a commercial structure) for governmental purposes. Finally, during that year a new brick jail was commenced. Geo V. McClintick, M.D. McGee, D.R. Coleman, and W.H. McGee were the contractors of the building costing $11,000, which was destined to be used as a jail only for a short time.

Shortly a the 1879 election determined that the county offices would be moved to Franklin (Morgan), where temporary quarters were again occupied, county commissioners began considerations for new buildings and within two months had accepted plans prepared by F.E. Ruffinni of Austin for a new jail and sheriff’s office. After advertising for bids in the Galveston Daily News, the contract to build the new jail was awarded to James P. Smith for $11,485. It was built on the “jail square” (public square). The jail was completed and accepted by the county that same year and the old jail in Calvert was sold.

Meanwhile, the county officers were again located in the second story of a rented building. Evidently satisfied architect Ruffinin’s services on the new jail, in 1881, the commissioners’ court authorized F.E. Ruffini to develop plans for a new courthouse with walls of Austin limestone for a cost of $30,000 or less. J.B. Smith was awarded the contract to complete the building within ten months.

Late in 1881, the county officials commended both the architect and contractor for their fine work and accepted the courthouse. An iron fence installed two years later completed the nineteenth century work.

After serving county functions for over four decades, county officials determined to remodel the building. Hix McCanleiss was the architect and the contractor was Babe Wilson. It was evidently during this work that the annex was made and the roof lines altered. Nonetheless the building retains much of its historic character and it should be the preserved for the benefit of future generations. 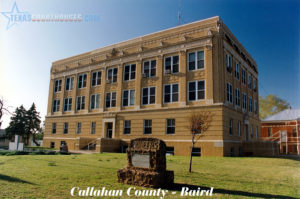 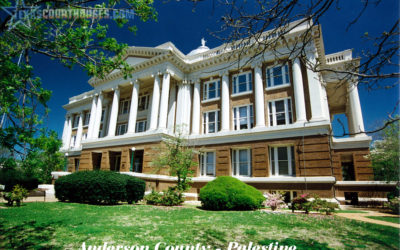