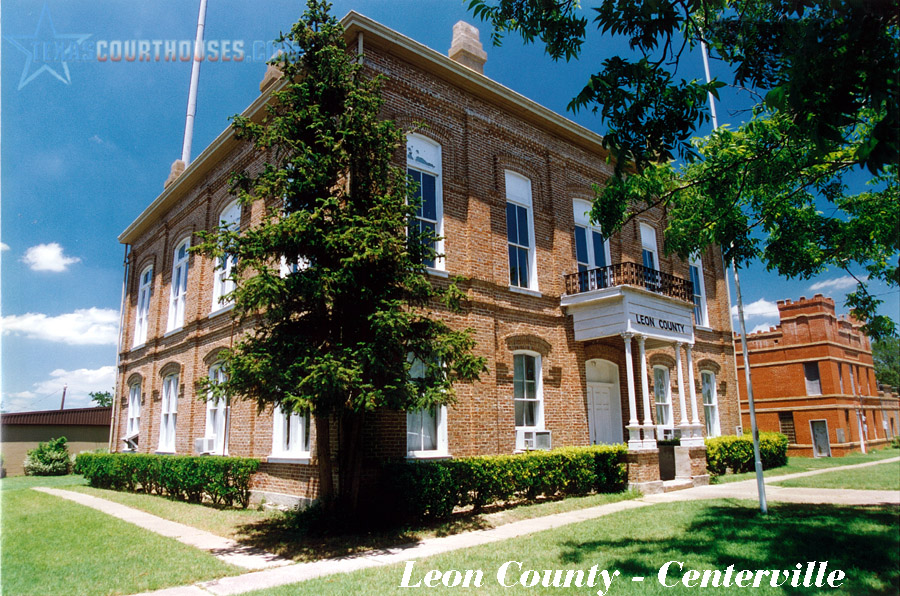 The Centerville public square is the site of several county structures. All located on the square, the Leon County Courthouse and two county jails survive in good original condition. All three are fine examples of buildings constructed to serve government in counties with small populations and modest financial means. Small in size, the buildings display attractive although restrained design features.

The plan of the Leon County Courthouse is unusual in Texas. Built on a scale that characterized the earlier antebellum temples of justice of the Lone Star State, the plan is rectangular with a single corridor extending lengthwise through the ground story. On either side are three offices. A single in the corridor provides access to a landing on the north side of the second story. On either side of this landing is a small jury room; the courtroom occupies most of the secondstory space.

The construction of the courthouse is similar to other Texas county governmental buildings dating from the 1880’s. A foundation of bricks was laid upon firm clay bearing three feet below the surface. For the walls, it was specified that English Portland cement be used in the mortar rather than lime. Floors were structured with wooden joists. To protect the ground floor joists against rot, cast-iron ventilators were installed in the brick walls–also a common practice.

Stylistically, the temple is noteworthy for a conservative composition typical of antebellum courthouses, but the details are consistent with other late-nineteenth century work. Brick pilasters with corbeling intended to represent Classical Doric capitals supporting an architrave articulate the facades into five bays on the north and south and four bays on the east and west–which had been typical of the Greek Revival. Brick stringcourses, two of which are located at window sill level further relieve the severity of the wall. A sheetmetal cornice containing a gutter terminated the composition. Window and door openings are spanned with stilted arches of brick. On both stories window sashes, with two over two lights, are hung with cords and weights. Above the second-story windows a transom was installed to accommodate the high ceiling space of the courtroom. Window sills are iron. On the east the two center openings of the ground story ate filled with brick panels.

A small portico supported by paired iron columns with pedestals and Corinthianesque capitals emphasized the south entrance. These bear upon low brick walls and support a wooden balcony with a decorative iron railing.

The interior still retains most of its nineteenth- century character. The ceilings on the first and second floor are beaded lumber, rather than plaster and pressed metal. According the commissioners’ court records the windows on the ground story had shutters while blinds were hung on the outside of the upper story windows–details which are now gone.

The building was well provided with fireplaces. Each of the six ground-story offices had a fireplace and mantle; one was installed in each of the second-story jury rooms and two were installed in the courtroom. Outside, the chimnies with their ornamental caps provided a broken skyline.

Located on the northeast corner of the public square, the nineteenthcentury jail also survives in near original condition. Typical of many in Texas it is a two-story brick building. Openings, some which are now filled with bricks, are spanned by stilted arches, reflecting the architectural style of the courthouse. Brick stringcourses girdle the building on both stories and intersect the openings at the level of the arch imposts. Located between the cornice and the upper stringcourse, corner pilasters incorporating brick corbeling are unusual features. Iron “S” shaped plates located at the corners tie the brick walls into the second- story floor. A hipped roof covers the structure. This building now serves miscellaneous functions.

Near the southeast corner of the public square, is located a jail built in 1918. This is a two story structure which originally contained sheriff’s quarters on the ground level and cells in the upper story.

The style of the 1918 jail symbolized strength. Incorporated into the design are corner towers and crenellations–representations of Medieval military architectural features.

Other features of the building, however, are straightforward. Openings are spanned with lintels and the walls have little relief. The main accents are provided by buff-colored brick stringcourses.

Although the building is no longer used for detention, it is still sound and serves county functions. Offices of the county surveyor are located within, while an annex adjacent to it is the home of the Leon County Abstract Company.

The Leon County Courthouse and Jails have both architectural and historical significance. The courthouse and old jail are simple yet dignified expressions with Classical lines; the 1918 jail displays Medieval military architectural elements. All are located on the Centerville public square which has been the center of governmental activities since the founding of the town.

Located in East Texas adjacent to the Trinity River, Leon County was created in 1846. Upon the organization of the county, the town of Leona, located near the southern county line, became the county seat. However, in 1850 the seat of government was moved to Centerville near the geographical center of the county where it has remained. Although the 1870 county population of 6,523 had increased to 16,583 by 1910, the Texas Almanac, 1976-1977 lists the 1973 population at 8,300. Centerville contains less than 1,000 people.

In 1858 the original courthouse was replaced by a brick building. This Antebellum courthouse, which must have been a Greek Revival styled work, served well through the Civil War and Reconstruction. Nonetheless by the 1870’s numerous repairs had become imperative and in 1873 a tax was levied for building a new jail and repairing the courthouse. The courthouse roof was recovered and the old shingles were sold. In addition the chimnies and windows were repaired.

Late in 1885 this courthouse burned but one or more of the safes survived. Subsequently, in response to an urgent need for a safe depository for records, an order was issued by the commissioners’ court to build two fireproof vaults on the site of the old courthouse using bricks from the ruins. A new temple of justice was to be built around these. These vaults were to be located in the space that had existed between the offices of the county and district clerks. Then a resolution was introduced to build a new courthouse on the same plan as the old. Early in 1886 the plans and specifications of Wm. Johnson were accepted and invitations for bids were published in the Democrat (Centerville), the Galveston Daily News, and the Fort Worth Daily Gazette. The contract was awarded to P. J. Gillen, a contractor from Mississippi, for $11,750–an exceptionally low figure for new Texas courthouses at this time.

Several years later the county judge and four county commissioners determined to build a new jail. To be sure, facilities for the detention of criminals had never been satisfactory. The orders which had authorized a new jail in 1873 culminated in the purchase of a store building from V. H. McAnnally for $2,500. This served as a temporary jail which was entirely unsatisfactory. (This structure was located on lot 73, block 18).

Finally in 1893 a contract for the construction of a new jail was awarded to contractors Robb and Wilson for $3,850 and shortly thereafter the old temporary jail was sold at public auction. Early in 1894 it was completed and a new fence was set up around the building. In 1906 new cells furnished by the Southern Structural Steel Company were installed, and various repairs were made.

Since this jail evidently proved inadequate, a second jail was built near the courthouse and the earlier jail. In 1918 the southern Structural Steel Company of San Antonio was contracted to build a new jail, according to plans they furnished. The building was completed and accepted that year.

The courthouse and two jails have served the county for over a half century and continue in use today.
Several new structures have been built on the square since the 1918 jail was completed. The sheriff’s offices and the jail cells are now in a new building on the northwest corner of the square. In 1973 a courthouse office annex designed by Robert W. Caldwell and Associates was erected east of the 1918 jail. At the time of preparation of this form another new building is under construction near the center of the public square. It is intended that the structures built within the past fifty years be excluded from National Register status. 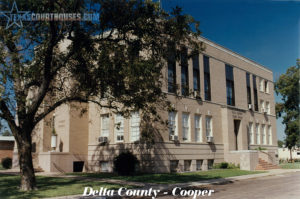 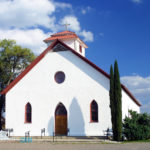