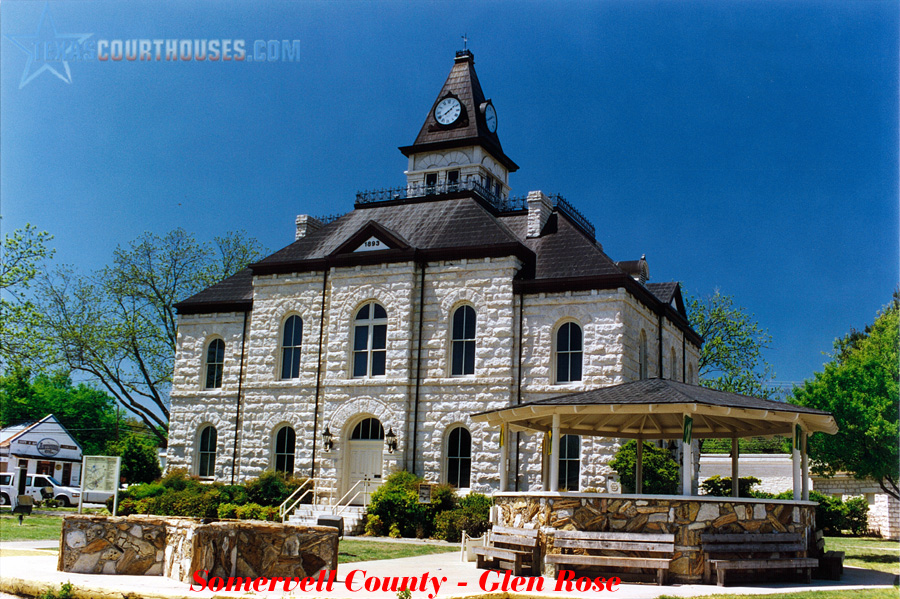 Erected in 1893 and located in Glen Rose, the Somervell County Courthouse’s civic function is visibly expressed through its strong, dignified and symmetrical architectural style. This ashlar masonry style, inspired by Henry Hobson Richardson’s adaptation of the Romanesque mode, was a predominantly used one in the construction of civic buildings throughout the 1890s, and one effectively accommodating one of Texas’ natural building resources, stone. Use has also been made of several elements of the General Grant style, also extremely popular at the time, such as the mansard roof and ornamental cresting.
It should be noted that recently a water-proofing application of dark, wooden shingles has been made to the tower, altering its former appearance, and resulting in a less than unified courthouse exterior. At that same time the cornices and pediments were painted a dark, matching shade in order to alleviate the abrupt effect that the new alteration had on the courthouse as a whole. This tower work was necessitated by limited county funds in hopes of preventing further damage to the structure, and plans have been projected to restore the clock tower back to its prior appearance, once sufficient funds become available.
The substance and character of the Somervell County Courthouse have been conveyed through symmetrical scaling and a simply embellished treatment of its rough-faced native limestone walls. Several elements have been employed to relieve the plain quality of these limestone facades, both structurally and decoratively.

Structurally the architect has slightly projected the central wall portions of each elevation, further calling attention to this effect by topping each protruded wall section with a pediment, intersecting the mansard asbestos- shingled roof.
Ornamentally this has been done by the use of voussoir door and window surrounds, a belt course and the string course and dentils of the cornice areas, all built of the same limestone as the walls. A unifying factor has been further provided by the spacing at regular intervals of these arched windows and doors.

The roof and clock tower have been greatly altered through the years since their original construction. Early photographs show the mansard roof and clock tower with elaborate cornice cresting, the clock faces themselves bold and handsome, and indeed the focal point of the building. However in 1902 a tornado did much damage to this portion of the building, and no attempt was

ever made to restore the tower back to this original state.
Following the tornado, which had destroyed most of the cresting and the dignified clock faces, the tower was covered in pressed metal, the only embellishment remaining being the tower roof cresting, and the simple pilasters and keystone arches ornamenting the tower walls. It has appeared this way until its recent roofing alteration.
Two outhouses, constructed of the same stone as the main building, occupy the southwest and northwest corners of the courthouse property.

A small town courthouse has traditionally functioned not only as a seat of justice, but also as an accessible site for the civic and social activities of the community that it serves. Following this tradition for almost 86 continuous years has been the Somervell County Courthouse in Glen Rose, a fine, well preserved structure, whose architectural style utilizes elements of both the Richardsonian Romanesque and General Grant mansard modes popular in the late 1800s.
Representing Texas’ third smallest county, this sturdy and simply designed courthouse was built in 1893 by John Carmachiel at the cost of $13,500. It had been built on the site of an as yet unfinished predecessor, work having been halted due to the continuing repercussions of the Panic of 1873 that had severely affected the Somervell area. A fire early in 1893 completely doomed this first courthouse, but a determined Commissioners’ Court quickly ordered that a two story stone structure with a fireproof vault be built in its place mat fall the present courthouse, with its Richardsonian Romanesque detailing and handsome clock tower atop the mansard roof, was completed. A story is told by long time Somervell residents, that even before any partitions had been erected inside, the enthusiastically proud population held an impromptu Christmas dance there to celebrate their courthouse’s newly laid floors.

Since that time its role as a center of justice has, of course, been its primary function, and within its offices, courtroom and judges chambers several prominent community individuals have made many contributions to both the county and the state.
The Honorable A.J. Hart, who beginning in 1874 served for three consecutive terms as a state representative, sat on a number of important committees there, and is probably best remembered in the area for his efforts in bringing about the passage of the act creating Somervell County in 1875, where he later served two terms as its county judge.

Perhaps one of the most notable residents to practice law in the courthouse was Ernest T. Adams. Adams, who died recently at 73, acquired, throughout his lifetime, a reputation in the county approaching near legend. His many accomplishments included attending Oxford University as Baylor’s first Rhodes Scholar, serving for about twenty years as Somervell’s only practicing attorney, and actively pursuing his interest in archeology. Regarded as an expert in Indian artifacts, his most well known discovery was several dinosaur tracks, found in the area, and now moved to the courthouse square.

In addition to serving the Somervell community in its judicial capacity, the limestone courthouse has also been the site, since the days of its construction, of many local celebrations and daily events of its population.

In its very early days, prior to a ruling in the l910s prohibiting it, the courthouse was sometimes used for religious services. Early photographs, taken at the turn of the century, show revival meetings held on the grounds with baptisms performed in a horse trough. Presently services are still held occasionally in the bandstand there.

The square has also served as a gathering point for traditional holiday and lodge celebrations, community dances and fiddlers’ contests, as well as important public meetings. Demonstrating the courthouse’s continuing relevance in Somervell’s modern age, it will be the site of the May 1979 meeting of the Nuclear Regulatory Commission regarding the controversial Commanche Peak Steam Electric Plant.

Perhaps one of the most interesting episodes to take place on the courthouse square involved a raid which took place in 1923, a time when Glen Rose had the reputation of Texas’ moonshine capital. According to press coverage of the incident, the raid netted not only 23 local citizens, including the county attorney and sheriff, but also 66 gallons of whiskey, 84 gallons of the beer, eight gallons of wine, 550 pounds of sugar and seven stills. When all of contraband was piled up on the courthouse square, it was said to resemble a junkyard.

Fifty-six years later, though somewhat changed in appearance due to its recent roofing alterations, Glen Rose’s courthouse still remains an integral fixture of the Somervell area, serving it well, both in judicial and community spirit. 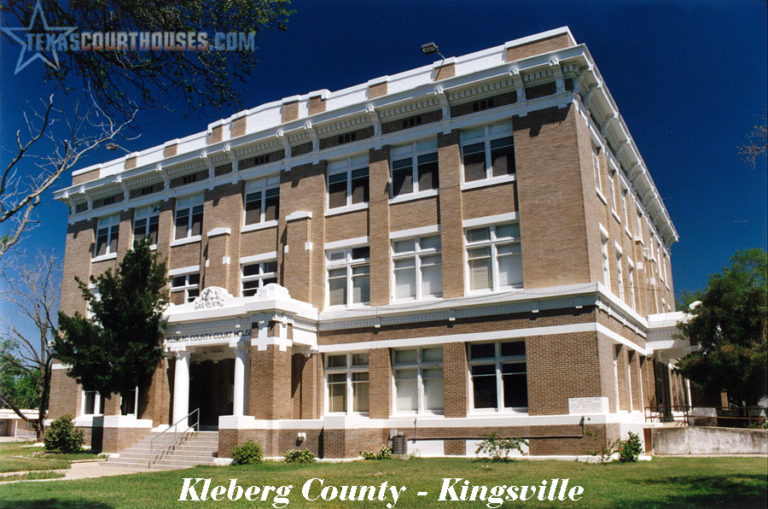