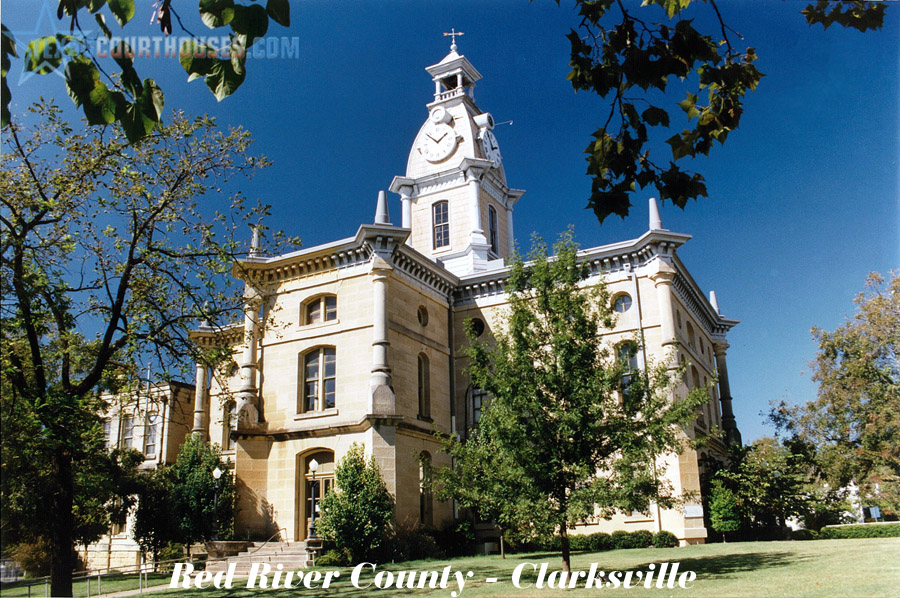 The Red River County Courthouse is located in the center of a square several blocks from the Clarksville business district and is surrounded by a residential area, a situation that is somewhat uncommon in Texas.
As is common in the state the concept for the plan was developed on a rectangle with entrances on each side. On the north and south, wings containing stairways project from the centers of the sides of the mass, thus forming a cruciform plan. Offices for sheriff, tax collector, tax assessor, and county judge were among the spaces located in the quadrants created by the crossing corridors on the ground level. The district courtroom with its high ceiling was on the second floor. An addition on the west contains the facilities of the county clerk.

Incorporating Renaissance Revival stylistic features, the Eled River temple of justice was distinctively built with ochre-colored limestone quarried in the vicinity of Honey Grove, a nearby community. The base of the walls below the water table was of rock-faced ashlar. Above this the walls were built with cut stones with flat hammered faces and smooth margins–unusual details in Texas.

Among the most remarkable features are the columns and pedestals projecting from the building corners–features similar to those used by the architect on some other works in north Texas. In the nineteenth century these details were admired by the public and reported by a contemporary as “comporting with the general aspect of the building.” Annular moldings decorated the base, capital, and shaft of the columns.

Other noteworthy exterior details’ included the openings and metal work. The doors and first-and secondstory windows were spanned with segmental arches; at the third level bull’s eye windows were employed. Stories between were expressed by bold stringcourses. A cornice of sheet metal manufactured in Dallas capped the wall and finials projected vertically above the columns, creating an irregular silhouette. In addition the centrally positioned tower was clad with metal; a clock with bold faces and a cupola completed the composition.

On the interior the finishes were simple but effective. Walls were plastered and wooden wainscots were employed in the courtroom and hallways. Pine floors were installed throughout.

The district courtroom had noteworthy details. A ceiling of boards with beaded edges was articulated by wooden beams running in two directions with pendants at points of intersection and at the wall. An iron fence separated the public seating area from the bar. The elevated bench of finely crafted wood was placed in a recessed area which was accented by an arch supported by iron columns.

While much of the interior remains as originally built, the district courtroom has been remodeled. A second floor has been added in the original two-story envelope. However, the original bench and jury box have been retained.
An addition housing offices and the county clerk’s records has been made to the west. Although the cubical form lacks the picturesqueness of the main building, similar materials and details satisfactorily relate the original building and the addition. The stringcourse and segmental arches in the addition are similar to those in the original structure.
Due to its unique character and its handsome details, the Red River County Courthouse has exceptional architectural significance; in addition it has been the center of county governmental functions from the latter part of the nineteenth century to the present day.

Located in northeast Texas adjacent to the river for which it is named, Red River County was created in 1836 by the Republic of Texas. The original county contained a large area which later was ultimately divided among thirty nine counties. However settlement of the region, had begun as early as 1814.

Laid out by James Clark, Clarksville was established in 1833. At the time the present courthouse was built the town population had increased to approximately 1,000 and today contains about 4,000.

The present courthouse was preceded by four other temples. Among these was an ante-bellum work constructed in 185’2-1853 by a masterbuilder named Yarborough, who also had built a courthouse in Tyler, Texas. The Red River building was 45 by 55 feet with two stories, built in response to popular demand for “a building creditable to the county in appearance and in workmanship, and of the greatest possible durability.” Although the requirement for permanence was fulfilled, the esthetic aspect evidently was not lasting; in 1885, one reporter noted “that when it was built no ideas of useless ornamentation prevailed with its builder. It is solid, very solid and unsightly.”

Subsequently it was determined that a new temple of justice should be built. County commissioners purchased for the site of the building a new block situated outside the commercial area. W.H. Wilson, a Dallas architect, was awarded the commission to design the building for the standard 5% fee and bids were invited in October, 1883, on plans which were retained in the office of the county clerk. After proposals were considered, P.C. Livingston of Monroe, Louisiana, was selected as the contractor. In 1884 the cornerstone, a handsome white marble block with a low relief image of the blindfolded goddess of justice on one face, was leveled into place by the Masonic fraternity.

The Red River County Courthouse was among the first temples built during the wave of construction of the last two decades of the nineteenth century during which time nearly every Texas county built a new courthouse. While under construction, it was the subject of numerous newspaper articles throughout the state. Although defects were reported, construction proceeded and early in 1885 the tower was underway and cornice was in place. The final work included the installation of a clock with dials eight and half in feet in diameter and a two-thousand pound-bell manufactured by the Howard Clock and Watch Company of Boston, Massachusetts. When completed the courthouse had cost $55,423.49, about $15,000 more than had been anticipated.

The Red River Courthouse was among the most admired works in the state built during the 1880’s. In 1885 the Standard (Clarksville) reported that it “will beyond question be one of the best in the state.
Today the building continues to serve its original purpose. 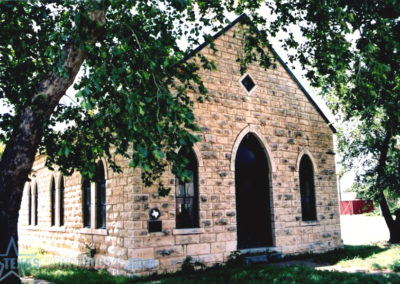 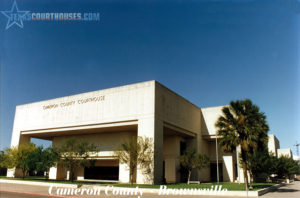