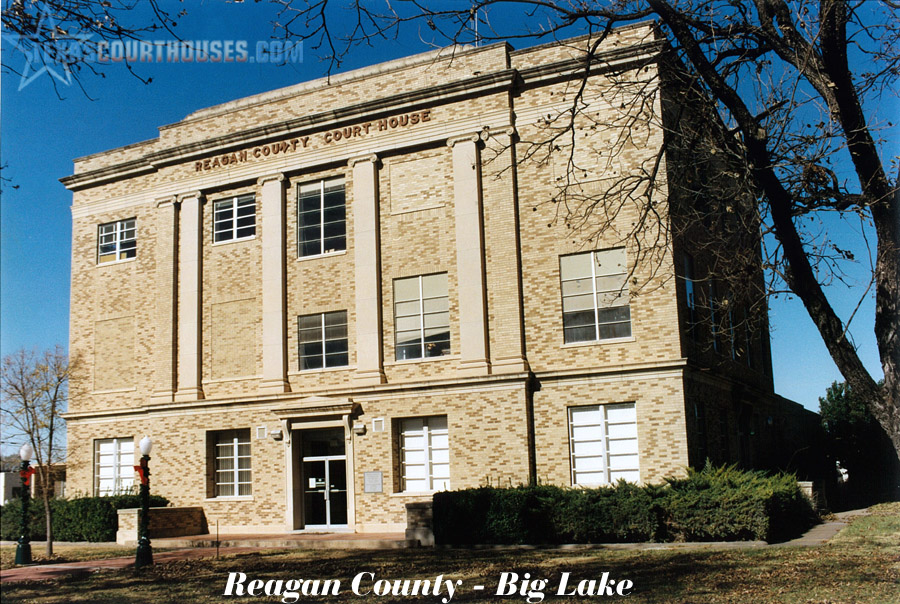 The old Stiles Courthouse now stands alone on a fading courthouse square in Stiles, Texas. The white board fence that once surrounded the courthouse property and the town buildings that circumscribed the square have all disappeared since the County Seat was moved twenty miles to the south of Stiles over fifty years ago. The stone courthouse and associated records vault are the only survivors of this early community that has now faded into the desolate plains of West Texas.

The courthouse is a square building, 50′ long at each elevation. The four facades of the two-story limestone rusticated structure are identical and symmetrically organized in an A-B-A pattern. The center section of the facade consists of a projecting one-story stone portico with arched entranceway. A pair of 4-over-4 single-hung windows are located in the projection continuation above the portico. A wooden balustrade originally capped the portico but has since been removed. On either side of the portico are two 4-over-4 windows, one on each floor.

The building has a hip roof with four small gables located over the central projection on each facade. A small semicircular window is located within the pediment of the gables. The cornice is simply detailed with an enclosed soffit. Four stone chimneys penetrate the roof at the outside corners. The roof structure was originally crowned by a cupola which has since been removed.

The first floor interior plan is a Greek cross with intersecting center hallways and four corner rooms measuring 16′ square. The stairway is located in the west hallway. The courtroom and two other offices are located on the second floor. Interior detailing includes plaster walls, simple door/window trim and baseboard, transoms over doorways and a wooden chair rail in the courtroom. The ceiling on both floors is pressed tin and the floors are wooden. A small raised platform is the only distinguishing feature in the courtroom.

A limestone records vault is located to the east of the main structure. It was originally built to provide fireproof storage for the earlier frame courthouse that occupied the site. It has a stone barrel vault, but was originally roofed over with a shingle roof. The steel vault doors are still in possession of the owner.

The Stiles Courthouse was the first substantial courthouse built in Reagan County. The rusticated stone complex, consisting of the courthouse and jail and a separate stone vault, was built on the Public Square in 1911. The four symmetrical facades of the courthouse were a source of pride for Reagan County citizens until the county seat was moved to Big Lake in 1925. Since that time, the courthouse has been used as a community center for parties, barbecues and dances. It was used as a school for one year.

Stiles was the only town in Reagan County when that county was organized in May, 1903. Located on Centralia Draw, Stiles is approximately in the center of the county. Property for the Public Square was deeded to the county by G. W. (Rome) Shields for $579.44. The first courthouse built on the square was a small frame building costing less than $500. The next year, $5000 in bonds were voted to build a more substantial courthouse containing a jail, and a separate stone vault. A subsequent bond election in November, 1910, provided $20,000 in 40-year bonds for a two- story stone building on the Public Square. The first contractor hired to build the courthouse was August Balfanz of San Angelo. When Balfanz had failed to begin work on the structure within 30 days, the court rescinded his contract on February 2, 1911. The next day the court awarded the contract to William Martin of Comanche, Texas. Mr. Martin was required to begin work immediately and have the building completed in eight months The new courthouse was finished and inspected by the Commissioners Court on October 25, 1911. The old frame courthouse was sold at public auction for $107.50 on November 13, 1911, to the highest bidder, T. D. Lucas.

The new courthouse was built of native stone quarried from a hillside a half a mile from the site. The stones were hauled to the site in mule- and donkey-drawn wagons by Tom Lucas, a Mr. Sheppard, and A. H. Garner. Mr. Garner, a new resident of the county, was a stonemason by trade. He was unable to work on the courthouse in that capacity, however, because he belonged to the Stonemasons Union, and the courthouse was not built with union labor.

In 1912 the Kansas City, Mexico and Orient Railroad planned to build a line up Central Draw from San Angelo through Stiles to Fort Stockton. A prominent land owner in Reagan County refused to sell a right-of-way, so the line swung twenty miles to the south, bypassing Stiles. Big Lake was organized in 1912, as a result of the railroad, and had reached the size of Stiles by 1919 In 1923 the famed Santa Rita oil well was brought in west of Big Lake, near the railroad. Big Lake boomed, and was voted the new county seat by a margin of 292 to 94 in 1925. Since then the town of Stiles has slowly dwindled. Its old courthouse, however, remained a central gathering place for the West Texas community for many years.

It was last occupied in the early 1950s and has remained unoccupied until this day. An advanced state of deterioration has prompted the present owner, Reagan County, to pursue restoration of the structure for future community use. 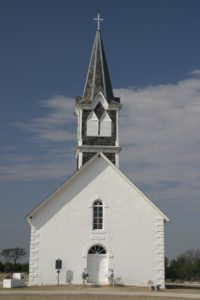 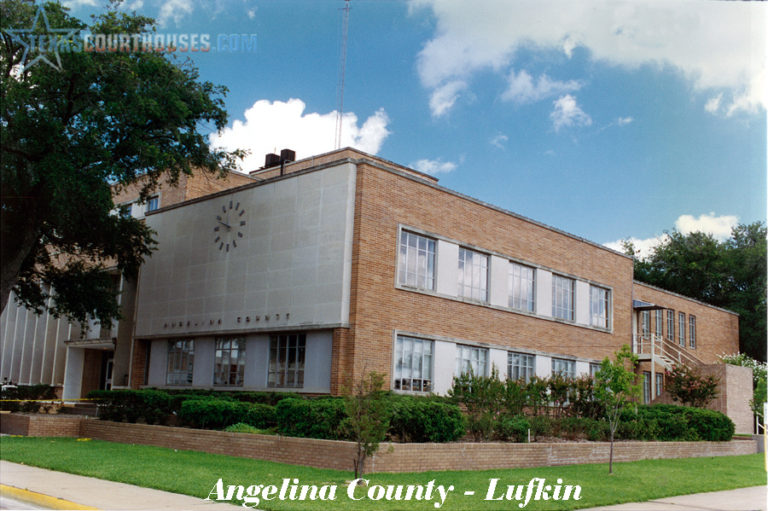