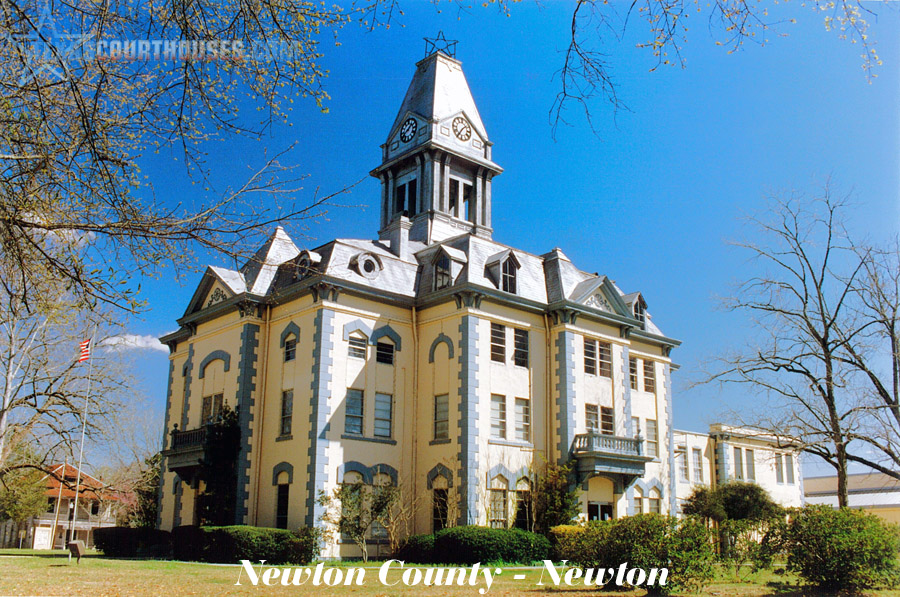 The Newton County Courthouse dominates the town square as a provincial statement of the Second Empire Style. This style, also known in the U.S. as the General Grant style, was a mode popularized during the latter half of the 19th century, particularly for public edifices. The geographic separation of Texas from design centers hampered its acceptance of stylistic developments; thus, although the Newton County Courthouse! was constructed in the 20th century, it represents the 19th century Second Empire style with its three-dimensional, mansardic massing. Originally symmetrical in plan, the square form was extended to the south with a two-story courthouse annex and jail in 1936.

Built in 1902-1903 by contractors Martin and Moody of Comanche, Texas, the three-story courthouse is composed of structural masonry walls set on a continuous brick footing five to six feet below grade, five feet wide at the base, stepping in to 24″ wide at grade level. The walls are 24″ thick around the vault area, 18″ thick on the first and second floors, and taper to 12″ on the third floor. The locally kilned bricks, originally exposed on the exterior, are laid in cement mortar and tempered with lime. In an effort to preclude the possibility of cracked walls, small mortar joints were employed to compensate for any foundation setting.

The structure originally consisted of four symmetrical facades, the north and south, and east and west being identical respectively. The three remaining original facades are composed of five projecting bays with the central bay projecting the farthest. Entrances, located in the central bays, are accentuated with bracket-supported, balustraded balconies of masonry construction. The smooth plaster walls of the bays are offset by decorative quoins and hood moldings. The moldings take the form of segmented, triangular, and rounded and flat keystone arches. A continuous architrave molding rest, atop the quoins and projecting from this architrave are pair of brackets which support the eaves, trimmed with cornice molding. The central projecting bays are crested with a classical pediment in which a floral form is denoted in shallow relief. The original structure is topped with a mansard roof composed of painted, pressed metal. The roof is pierced with both round and arched dormers as well as two chimneys. Rising from the center of the roof is a truncated clock tower. The tower consist of an open-sided belfry terminated with a pilaster supported apron. Rising from the apron are clock facades topped with pedimented architrave and mansard roof. Original windows were double hung with wooden mullions, and doors were wooden with glass and wood insets and over door transoms. The interior featured tile and wooden floors, high ceilings with fans, plaster walls, and wooden staircases.

Throughout the years of continual use, the courthouse has been altered several times, reflecting the changing needs of Newton County. In 1910 and again in 1925, the interior was modified to provide more functional spaces. In 1935-1936 a two-story jail was added to the south facade. The flat-roofed addition reflects some of the original design elements, though in a simplified manner. It is believed that at the time of this addition the brick walls were covered with an application of cement stucco with a coarse aggregate. In 1972 and 1973 the structure Wets “renovated” by contractors D.E. Walker and Sons, utilizing revenue sharing funds. At this time, the original doors and windows were replaced with aluminum and glass counterparts; the ceilings were lowered; the walls were paneled; the first floor was retailed while the second and third floors were carpeted. In addition, a stair glide was installed on one staircase, the plumbing and wiring were updated, and a central air/heat system was installed. The courthouse continues to provide the county with offices for county officials, rooms for court proceedings, offices for the sheriff, jail facilities, and spaces for public meetings. In addition, the ground provide space for special events such as fairs and election returns.

Exemplifying a style that was considered particularly appropriate for public buildings at the turn of the century, the Newton County Courthouse, built in 1902-1903, stands today as the focal point of Newton. The three-story, mansard- roofed structure dominates the town square with smooth plaster walls offset with decorative quoins and hood moldings and other supporting features of the Second Empire style. While the structure is a good representation of this mansardic development of the style, it is also a reminder of the tumultuous conflict that proceeded the selection of Newton as county seat of Newton County.

On April 22, 1846, Jasper County was divided with a north/south axis, the eastern portion of the county being renamed Newton County in honor of Corporal John Newsman, companion hero to Sergeant William Jasper of the American Revolution, under Francis Marion. The Texas State Legislature specified that the geographical center of the county be located and the county seat established within a five mile radius of the center. Quicksand Creek was originally established as the county seat, with meetings held in the home of Joseph Irvine. Due to erroneous field and survey notes, defective land titles, and local prejudices, the county seat was moved four times during the first decade of the establishment of Newton County, and a petition was filed for a fifth move. Finally, in an effort to settle this long-lasting conflict over the location of the government seat, the legislature decreed that an election be held, and Newton, receiving the most votes, was declared the county seat. Despite this final decision, the county records had to be “stolen” from Burkeville under guard and secrecy. The present structure was built in 1902 1903, constructed by contractors Martin and Moody of Comanche, Texas, at a cost of $21,947.00. On March 30, 1903, the Commissioners Court accepted the new building which has served as the administrative offices for Newton County since completion.

Since its construction, Newton County Courthouse has served as a focal point for the town and county in both an architectural and functional capacity. Early in the century the courthouse lawn boasted a baseball diamond which served practices as well as games. The first Newton County Fair was held on the square in 1917; others have taken place in subsequent years.
The grounds have hosted a variety of political rallies with a blackboard erected outdoors to publicize returns during elections. The courtroom has served as a meeting place for various county committees and task forces. On June 26, 1971, the Newton County Historical Commission marked the 125th Anniversary of Newton County with an all-day festival which included a parade, exhibits, and various programs and contests. The celebration was repeated with the addition of a trades exhibit in 1976 to denote the 130th Anniversary of the county. On March 2, 1976 the county planted a Liberty Tree on the courthouse lawn and accepted a Bicentennial Flag along with the designation of Bicentennial Community. On a regular basis, the courthouse serves as an exhibition hall for displays by local organizations such as the Newton Garden Club and the Newton County Historical Commission. 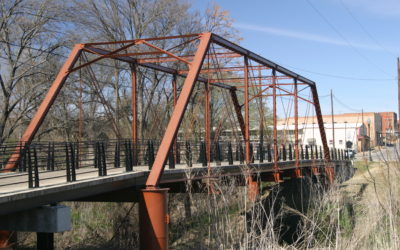 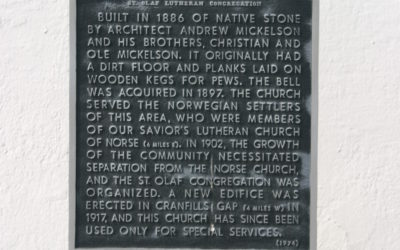