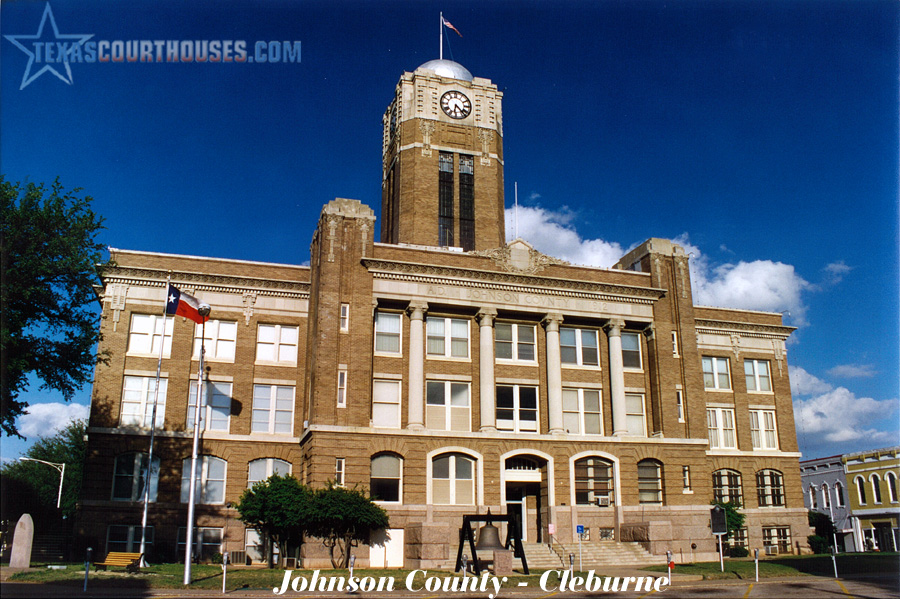 The Johnson County Courthouse is one of the most noteworthy early 20th-century courthouses in Texas. While the basic form and massing reflects relatively conventional Beaux Arts traditions, much of the interior and exterior detailing shows strong Sullivanesque influence. The Courthouse with its soaring tower remains the visual focal point of the city of Cleburne, and the structure has had few alterations over the last 75 years, preserving its integrity to an unusual degree.

The Johnson County Courthouse is a freestanding structure occupying a full block at the heart of the Cleburne commercial district. The structure is essentially rectangular in shape. It is three stories high with a full, raised basement and a square tower rising another five stories or so. East and west elevations are seven bays wide in the center pavilion with an additional three bays at each side. North and south elevations are five bays wide. There are generally paired, one-over-one windows; most retain their wooden frames. The roof is flat, except for a hemispherical dome atop the tower. The basement level is clad in Texas pink granite ashlar, while the brickwork of the first floor is rusticated. Second and third floors are faced with smooth Elgin brick, and all four sides have central colonnades with stylized, Giant Order Composite columns. The entablature over the colonnades has an incised inscription: ‘A.D. Johnson County 1912 and symmetrically placed Sullivanesque pendants at the sides and on the tops of the paired east and west facade pylons.

The Courthouse is surmounted by an approximately 90′ central clock tower. The first floor of the tower contains courthouse storage and the upper portion of the central atrium, while the bulk of the tower is a hollow shaft. The capitol portion of the tower has clocks facing cardinal directions flanked by terra cotta ornamentation in a chain like pattern, which in turn have Sullivanesque pendants below.

Unquestionably the most spectacular interior space in the Courthouse is the six-story central atrium. Rising from the basement level, the atrium has Georgia creole marble facing the corner walls and balconies on the first, second and third floors. Rich, Sullivanesque detailing is found along the cornice, architraves and along the chamfered corners. An octagonal art glass skylight crowns the atrium; especially noteworthy are the Lone Star cartouches along the four wider sides.

Other interior spaces are more conventional. Most of the hall spaces have Georgia creole marble wainscoting and tile floors. Two panel doors with crinkle glass transoms remain throughout most of the building and have simple brass hardware. Cast metal stairs have Prairie School balustrades of note, and the 118th District Courtroom has very fine ornamental plaster cornices in a Sullivanesque design; unfortunately, a false ceiling was installed in 1967, but the original remains largely intact above. An account of the Courthouse at the time of its opening noted that most ceilings in the Courthouse were painted a light buff and walls a dark shade of silver green; courtroom walls were circassion brown with ivory and gold cornices. All are presently painted white.

Wall divisions and interior detailing remains largely unchanged. A large, fourth floor room currently used for storage has windows looking into the atrium, and is one of the more noteworthy and least known spaces in the structure.
Two contributing statues, classified as objects, are found on the grounds of the courthouse. At the southeast corner of the courthouse grounds is an obelisk with small fountain, erected in 1917 by the Pat Cleburne Chapter of the United Daughters of the Confederacy. At the center of the west side is the Courthouse bell; it is inscribed, “This bell made for Johnson County Courthouse AD – 1913 Ring for Trust and Justice.”

From the end of Reconstruction to the advent of the Great Depression, Texas county courthouse complexes were not only the functional seat of county government but were also symbolic of the wealth, ambition and established status of Texas counties. As elsewhere in the United States, they tended to be the focal point of all political and social functions in the county.

Furthermore, there was an intense boosterism among citizens of rival frontier (and settled) counties, each of whom hoped that their county would emerge as a new Dallas or Galveston or El Paso County. In many of Texas’ 254 counties, the Courthouse was, and in many cases still is, the most substantial and architecturally pretentious building locally. Most were architect-designed. Later nineteenth century courthouses were usually vertical, masonry, aspiring High Style structures reflecting Second Empire, Romanesque or occasionally Renaissance Revival styles. Early 20th-century courthouses reflected Beaux Arts, some Prairie School and in later years Art Deco influence. Associated property types include detached jails and statuary/monuments.

Located on rolling prairie land immediately southwest of Fort Worth, Johnson County was created and organized in 1854. On April 15, 1912 (coincidentally the day the Titanic sank), the handsome 2nd Empire County Courthouse burned, taking life of City Marshall Albert Bledsoe. The burnt 1883 courthouse was architecturally significant in its own right and had been designed by prolific courthouse architect Wesley Clark Dodson (1828-1914), who was responsible for similar courthouses in adjacent Hood (National Register 1974), Hill (N.R. 1971) and Parker (N. R. 1971) Counties.

According to a contemporaneous newspaper account, the Johnson County Commissioners Court “immediately called for plans to be drawn for a new building. . . the court in a body visited several towns and cities and inspected their new and modern court houses so as to determine what was best for Johnson County.” Likely the Commissioners visited the Cooke County Courthouse (1911) to the north in Gainesville and possibly the Harris County Courthouse (1907-10; N.R. 1981) in Houston, for they selected their designers, the celebrated Dallas firm of Lang and Witchell, for the new Johnson County Courthouse.
Otto H. Lang, born in Germany in 1864, came to the United States in 1888 and was head of the Texas & Pacific Railroad architecture division until 1905. His partner, Frank Witchell, had worked with the prominent Fort Worth architectural firm Sanguinet and Staats, who designed numerous structures now listed in the National Register. While most Texas architectural firms in 1912 practiced in cautious Beaux Arts or even residual Late Victorian modes, Lang and Witchell and a limited number of other architects demonstrated an appreciation of the Prairie School. North Texas in particular had very strong cultural, economic and transportation links with the Midwest. Lang & Witchell’s Prairie influence can be seen in such Dallas buildings as the Sanger Brothers Department Store (1910; N.R. 1975), the Rufus W. Higginbotham House (1913; Swiss Ave. H.D., N.R. 1974) and the Southwestern Life Insurance Company (1912), the latter called by writer William L. McDonald `the finest Sullivanesque skyscraper ever to grace the city of Dallas.’

That the Johnson County Commissioners would select a particularly progressive architectural firm is not surprising. The county seat, Cleburne, was the location of the machine shops and mechanical headquarters for the Gulf, Colorado & Santa Fe Railroad, and between 1910 and 1920 the population of the city increased by 20% to 12,820 (a figure it would not reach again until the 1950 census). A new Carnegie Library (1905; N.R. 1981) and a U.S. Post Office (1913) had been completed in an exuberant Classical Revival mode, and a 1905 publication The Truth About Cleburne and Johnson County concluded
Taken as a whole, there is probably no better County in
the entire State than Johnson. . .the constant
development of her resources gives guarantee that she
will continue to improve until none stands ahead of her
as a place to invest for profit or to plant money and
build a home.

The resulting Lang & Witchell design for the Johnson County Courthouse is remarkable. While at first glance it appears to be a twin of the firm’s Cooke County Courthouse, the proportions and detailing of the Johnson County Courthouse are much finer. The strong Beaux Arts influence remains, but remarkable Sullivanesque pendants and stylized capitals are seen on the exterior of the Cleburne structure. Architectural historian James Wright Steely notes the apparent influence of Finnish architects Eliel Saarinen and Lars Sonck in the design of the clock tower, while architect historian Willard B. Robinson considers the interior `among the most spectacular of any courthouse in the Lone Star State.’ The atrium in particular soars six stories and features very fine Sullivanesque foliated detailing, marble walls and an exceptional art glass dome. It should be included in any list of great interior spaces in Texas. Significantly, the Lang & Witchell courthouse drawings were initialed by architect Charles Erwin Barglebaugh, who had trained under and worked for Frank Lloyd Wright and may have been the project architect.

The courthouse retains its dominant position on the Cleburne skyline and can be seen from a long distance on the major traffic arteries which converge on the Courthouse Square. It was opened with much fanfare and 24 years after its construction a local newspaper noted it was `one of the most attractive buildings of its kind in all Texas. It was constructed in 1912, but still bears that new look that causes one to doubt its age.’

Fortunately, the Courthouse’s pivotal role in the community has led to its preservation by successive Commissioners Courts. The historic interior paint schemes have been lost, a few windows changed and most unfortunately the ceiling of the primary courtroom was lowered; but the structure retains its historic integrity to an unusual degree. 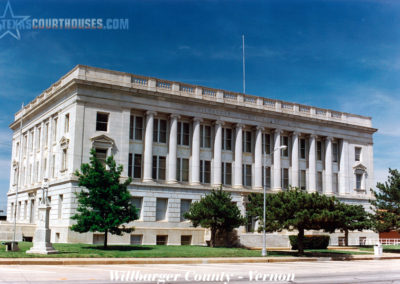 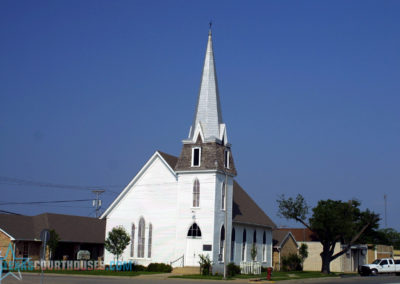