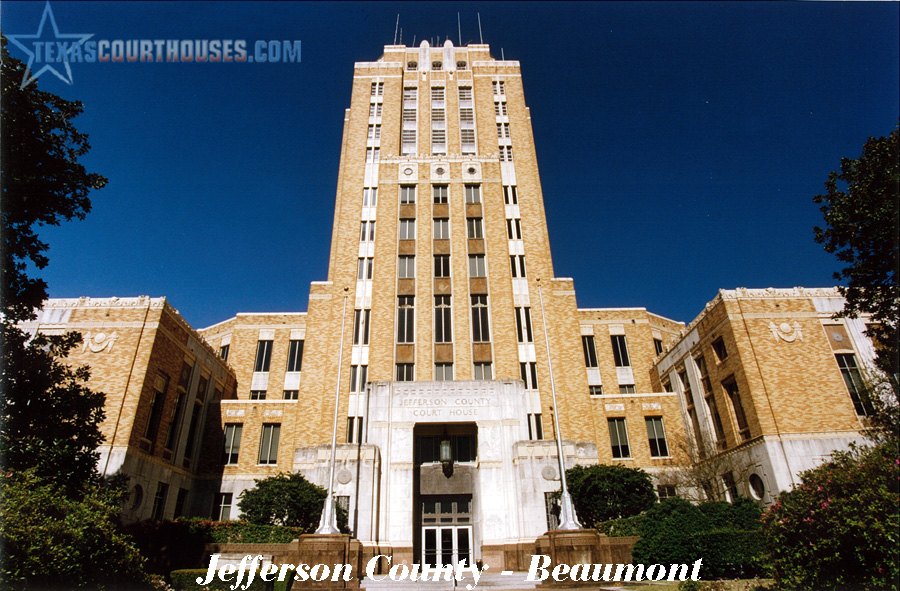 The Jefferson County Courthouse is one of the earliest and most outstanding examples of the Art Deco style not only in Beaumont but in the entire State. Of steel frame construction with buff brick cladding, the courthouse with its progressive, set back tower rises fourteen floors and stands as one of the most dominate elements of the Beaumont skyline. The Courthouse features noteworthy craftsmanship and ornamentation throughout its exterior and interior and stands virtually unaltered since its completion in 1932. The Courthouse, therefore, retains its historic character to an unusual degree. A late 1970s, three story, pink granite veneered annex was erected just north of the Courthouse and is joined to the original building with a two story passageway. This addition detracts from the integrity of the Courthouse but its effect is minimal due to its small scale and sitting. The Jefferson County Courthouse stands one block west of the Neches River within the city’s original townsite and is bounded by Pearl, Milam, Main and Franklin Streets. The Courthouse remains somewhat detached from its immediate surroundings because of its scale, the abundance of parking lots nearby, as well as its location within a transitional area between the commercial center of town a few blocks northwest and the Port of Beaumont to the east.

In plan, the building begins at the basement level as a rectangle about 240′ x 108′, the long axis facing Pearl Street. The first and second floor configuration includes indentations on either side of the entrance blocks. At the third level the indentation pattern changes, making the building’s wings, occupied by courtrooms, higher than the inner section. The fourth floor is limited to the central core. Diagonally placed walls there are repeated on the building’s tower, which begins at the fifth level. A final step-back occurs at the twelfth floor. The corner walls of this crown are set approximately 45o from their flanks, in contrast to the main tower corner walls which are at (approximately) 70o/20 angles with the main facades. Altogether, the many planes create a highly variegated mass reminiscent of contemporaneous Northeastern ziggurat skyscrapers.

This complexity is enhanced by the building’s polychromatic textured surface. The building rests on a rough-finished Colorado greenstone foundation. Windows are separated by long vertical bands of the buff brick that is the building’s main material. Each coping of the structure’s many blocks is articulated in carved limestone. Some courses are simple, such as the anthemion moldings, eagles, bucrania, garlands, wheat sheaves, and the ubiquitous curved ferns so typical of the 1930’s. The north and south elevations and the fourteenth floor cornice are particularly rich in detail. In places these design elements are applied directly to brick walls. Twelve simple stone panels separate the tower windows below an ornate carved limestone band accentuated by octagonal medallions. These motifs are repeated around the tower and in reverse values on the north and south facades, where they are spaced by pilasters and further decorated by carved bands that completely surround the windows. Openings on the fourth floor wings are surmounted by shields and grouped flags. Triglyphs, moldings, and basrelief limestone panels portraying the workers who built Jefferson County sawyers, cowboys, farmers, and oil field roughnecks – make the Pearl Street entrance a focal point.

Fenestration types vary. Most of the windows are aluminum framed replacements for the steel casement originals, a few of which remain. On the tower they follow a general ABBBA pattern. On the jail floors, eight through eleven, the original il-awnings are in place. Nine-light oculi surrounded by voussoirs punctuate the limestone facing of the first floor at its corners.
The pyramidal roof is composed of eight triangular panels covered with tiles laid in a zigzag pattern. A beacon light mounted on a metal tower caps the roof.

Minimal changes have occurred on the exterior. Some entrances have been modernized with glass and aluminum. The main door is sheltered by a corrugated metal awning that will be removed soon. The aforementioned window exchange, although unfortunate, has not seriously eroded the appearance, since a central mullion continues the old casements’ general configuration. To the building’s north is the most severe modernization – a massive three-story pink granite annex. A progressively indented entrance way supported by square pillars is at the southwest corner. The annex does not contribute to the Jefferson County Courthouse’s significance. However, landscaping disguises the link so the buildings almost appear to be two separate structures, and the fourteen-story 1931 structure dwarfs the annex and remains the focal point of the complex. Just east of the old courthouse is a small mechanical services building. Of recent construction, it does not contribute to the other’s significance.

Inside, lavish decoration proclaims the building’s Art Deco heritage. Any surface or object, whether utilitarian or nonessential, was evidently considered a proper subject for the metal worker’s artistry. Some of the most outstanding examples are the door and transom of Rooms 205 and 207, a wall heater on the second floor, the treasurer’s department public service window, and fire hose cabinets and elevator doors throughout the building. The aluminum designs are primarily non-representational zigzags, geometric shapes, or stylized plant forms.

Molded plaster was another popular decorative feature of the 1930’s, and is well represented in the courthouse. Good examples are found at the entrances to and in the second floor courtrooms. Motifs that recall seashells adorn walls and ceilings. They are repeated in carved wood panels to set off doors and unadorned spaces. Another bovine skull is at the center of a panel found in the southeast second floor courtroom.

Furnishings also are in keeping with their surroundings. Elegant lamps with sharply angled panes softened by etching are common. A curvilinear metal freestanding counter in the first floor tax office is typical of built-in appointments. Marble from France, Belgium, and Italy is employed for partitions, floors, and wainscots. Texas terrazo is also used for flooring. It has been laid out in large scale patterns, including checkerboards, diamonds, stripes, and medallions. Even the bathrooms are distinguished by Art Deco ceramic tiles.

Two interior features deserve particular mention. One is a large metal bas-relief map of the county illustrating its industries – ranching, lumber, rice, and oil found in the main hallway floor. The other is a skylight over the north wing’s courts lobby. Its light filters through stippled glass panes set in a covered ceiling. It is matched by another skylight over the south wing, but its light has been obscured at the roof level. There are too many interior details to describe each individually, but their variety and elegance are virtually important to the building.

A large renovation program is scheduled. Architects at the Texas Historical Commission are in close communication with the project architects to ensure preservation of the building’s distinctive character. The original drawings, with notes on work done to date, are available to assist in this task.

The Jefferson County Courthouse at 1149 Pearl Street in Beaumont is one of the most outstanding examples of the Art Deco style in Texas and is an important landmark in the architectural development of the Texas Gulf Coast region. That the town of Beaumont should have one of the most significant high-style Art Deco structures in the State is remarkable and illustrates the sophistication that new industries brought to Jefferson County. The Courthouse has outstanding stylistic features on both its interior and exterior. Particularly noteworthy are the strong vertical emphasis and the carved stone panels that embellish it. The interior is equally important, with aluminum, marble, wood, and glass employed as ornament for the large airy spaces. The fourteen story building was constructed in 1931-32 and was designed by local architects, Fred C. Stone and A. Babin. The Courthouse has remained virtually unaltered since its completion. However, a three story annex-was recently erected just north of the building, but this addition does not severely affect the historic character and integrity of the Courthouse.

The property the building occupies has a long history as the scene of county functions. It was conveyed to the Chief Justice of Jefferson County in 1838 by Nancy Tevis, a woman settler who arrived thirteen years earlier. 1838 saw construction of the first courthouse, a two-story log and pole structure with the jail below and courtroom above. From 1850 to 1853 court was held over a store owned by Milliard and Pulsifer. The second courthouse, of lumber on a cypress log foundation, was begun in 1854. D.T. Inglehart, a surgeon of the Confederate Army, rented the building in the spring of 1863 for use as a hospital. In 1893 the third courthouse, built of red brick and white stone, was completed. The cornerstone of the 1893 building is installed to the right of the entry in the current Jefferson County Courthouse.

When the time came to build a fourth courthouse, the county chose a former Beamont mayor, Fred C. Stone, and his partner A. Babin, a Louisiana native, as architects. A million dollar bond issue provided the funds. Stone and Babin designed it in the current style, with a tower set back from flanking wings, and spared no effort to make the offices and courtrooms grand and impressive. Their work remains virtually whole today. The skyscraper configuration chosen for the Courthouse is especially noteworthy. Texas courthouses had long emphasized verticality, but this was traditionally associated with the use of domes or tower elements. Technology and changing fashions by 1930, however, made possible high-rise public buildings, of which the Jefferson County Courthouse was certainly one of Texas’ first; curiously, Hucy Long’s skyscraper. Louisiana State Capitol less than 200 miles away, was under construction at the same time as the courthouse in Beaumont.
January 17, 1932 was the dedication day. For the first time, all county offices, court quarters, and the jail were assembled under the same roof. The building was adequate for almost 50 years. In 1978 construction began on an annex, and was completed in 1980.
There are few true Art Deco buildings in Texas. The biggest cities – Dallas, Fort Worth, and Houston – all have several notable examples. But Beaumont’s reception for the new style is unexpected. Of the fifteen buildings for which construction dates are given in Emily Little’s Art Deco Architecture in Texas, only six preceded the Jefferson County Courthouse’s erection. Beaumont is the smallest city known to have a major Art Deco representative. The Kyle Building, in Beaumont’s Commercial Historic District, was built after the courthouse, So the courthouse was definitely a pioneer in this part of the state that was just losing its frontier quality, thanks to its roaring industries.
The future of Art Deco buildings in Texas is uncertain because they are, for the most part, unrecognized as valuable. Designation of a major public structure, the Jefferson County Courthouse, as historic, will facilitate their being more highly esteemed. 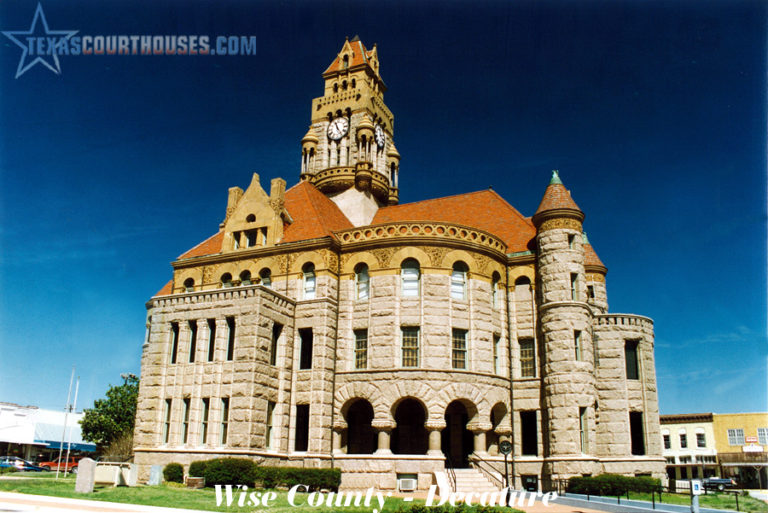 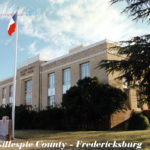