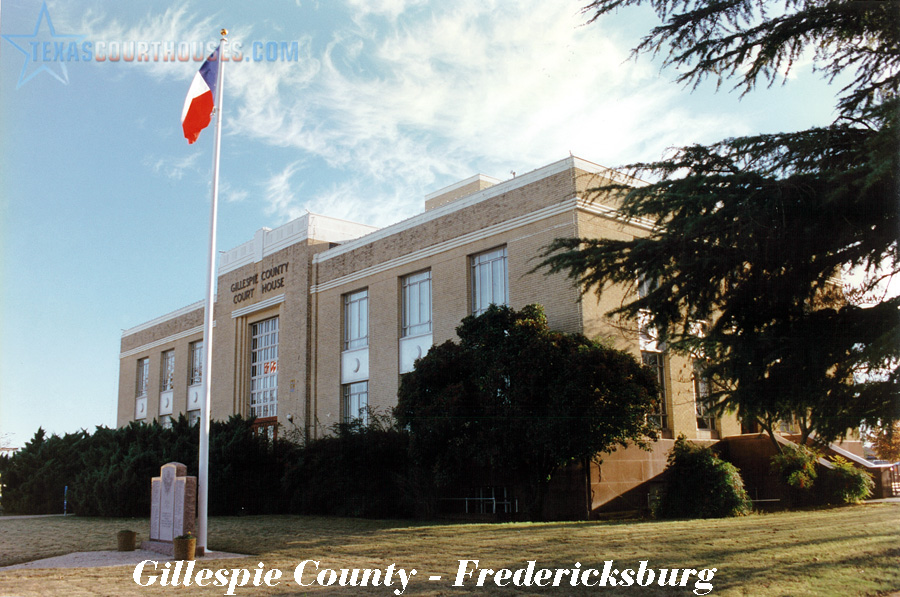 The second Gillespie County Courthouse was constructed in 1881-1882 by Alfred Giles, a notable San Antonio architect. The two-story limestone structure situated in the courthouse square has an H-plan with entrances on all four facades. The north and south elevations and the east and west elevations are identical. The building, of native limestone, is constructed in a rough-faced ashlar stone with quoins, the belt course and lintels of smooth-faced ashlar. The old courthouse has a gabled roof with gable-ends surmounting the projecting, pavilion-like sections of the building. The elaborate and generously proportioned cornice has a cavetto mold, very large scroll-shaped modillions, a corona, a fillet and a crown mold composed of a cyma recta and a fillet. The roof, sheathed with standing-seam tin, has ornamental ironwork along the ridge poles and acreteria-like wooden decoration at the peak of each gable-end. Small, round-headed dormers are located on each side of the central pavilion on the east and west facades and on each side of the round-headed gable on the north and south elevations.

The north elevation which faces Main Street, is a three- part compostition with end pavilions and a one-story porch across the central block. The porch which joins the two end pavilions is supported by pairs of columns on plinth blocks with capitals and three raised panels on the columns themselves. The porch has a cornice with modillions and a delicate castiron balustrade above. The doorway has double, solid doors with six raised panels in each doorm, and a transom above. The belt course at what would be the spring- line of the doorway’s lintel arch forms the lower element of the smooth-faced hood-like lintel with projecting keystone. A single, two-over-two, double hung sash window, the type of fenestration used throughthout the building, is on each side of the entrance. The second floor central section of the old courthouse building is divided by five windows. The central window of the composition has a smooth-faced, hood-like shouldered-arch, while the pairs of windows flanking the central aperture have segmental, hood-like lintels with keystones. All windows on both floors are joined by a belt course at the spring-line of the winow arches. Above the central window is a round-headed gable with a roundal aperture with an iron grill and a star medallion. The pavilion ends of the north and south elevations have two segmental arch windows on the first floor, and a double window with fan light above on the second floor. Quatrefoil roundals with round lintels and keystones are in the gables.

The first Gillespie County Courthouse, completed in 1855, was a two-story limestone building with a galley in front, two rooms downstairs, and a courtroom upstairs. In 1881, the county commissioners decided that a new courthouse was necessary. A competition was held with a fifty dollar prize for the best plan for a two-story courthouse. Requirements of the courthouse as listed by the commissioners were: six rooms and two vaults downstairs and a large courtroom and two offices upstairs. Provisions for heating and ventilation were requested. Two architects submitted plans but County Judge William Wahrmund and the Gillespie County Commissioners chose those of Alfred Giles of San Antonio and commissioned him on November 28, 1881.

Mr. Giles received a fee of one thousand dollar. The construction contract went to John Heinen and James Courtney for twenty-three thousand dollar. To finance the new building, seventeen thousand acres of school land in West Texas were sold.
Mr. Giles requested that the best of materials be used throughout thebuilding. Limestone for the foundation and walls came from Dietz Quarries two and a half miles northwest of town. John Dechert Quarries near Luckenbach supplied the white limestone for thetrim. Heavy double doors with raised panels set in molding were made for the four entrances and the upstairs coutroom. Copper was used for distinctive locks and doorknobs, the latter showing a interesting hummingvird design. The handsom building completed in 1882 set in a city square with grasss and trees, display an excellence in design and craftsmanship.

In 1939 the present courthouse was constructed and the old courthouse was, for twenty-seven years, used as offices and storage for numerous organizations. In 1967 the structure was restored and now houses the Pioneer Memorial Library with a community meeting hall on the upper floor. The old Gillespie County Courthouse was restored through the generosity of Mr. & Mrs. Eugene McDermott. Milton M. Moseley was the restoration architect.
Recorded Texas Historic Landmark – 1967. 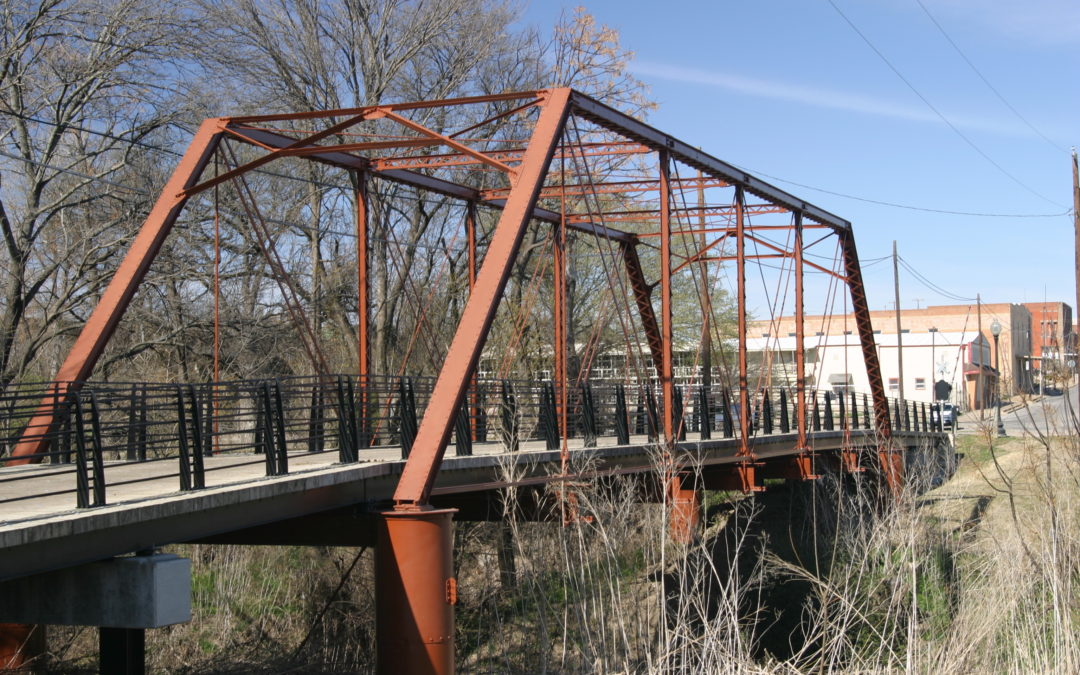 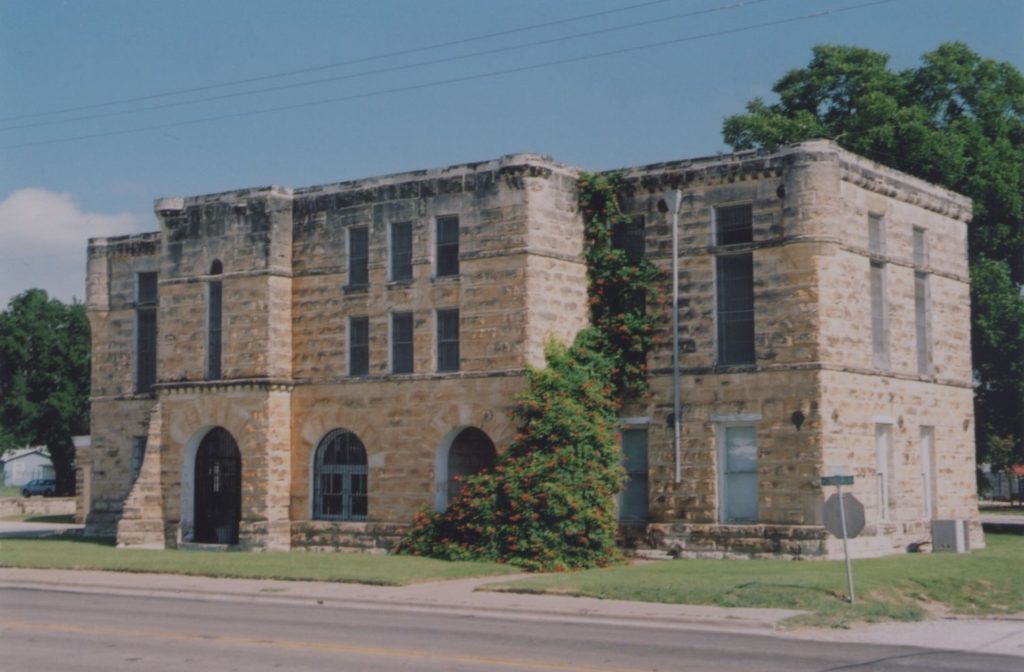