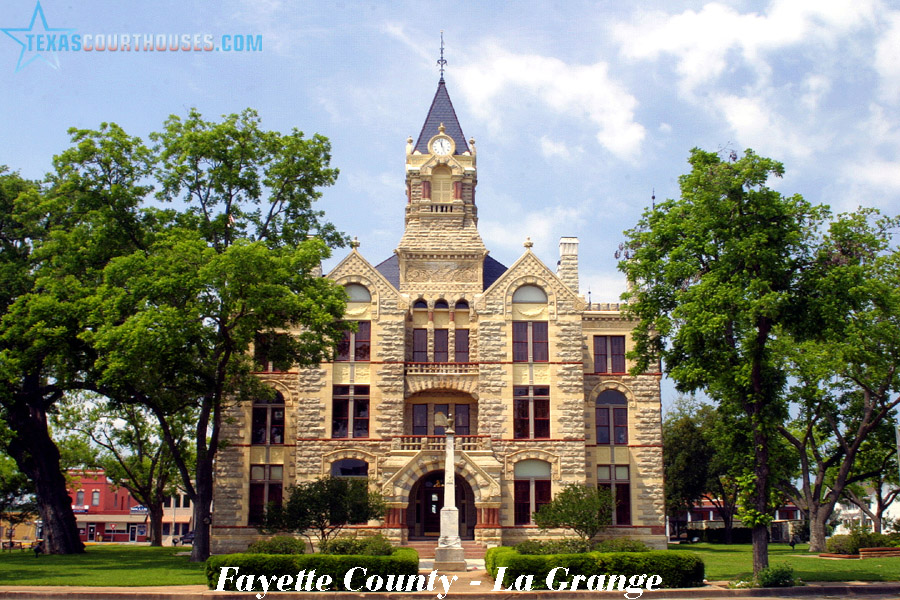 The Fayette County courthouse, dominating La Grange’s courthouse square, is surrounded by two-story commercial buildings, typical of small Texas courthouse towns. A block from the square stands the picturesque 1881 Victorian Gothic county jail. Although the entire square is worthy of nomination, only the courthouse and jail will be submitted at this time. The Fayette County courthouse is a three-story masonry Romanesque Revival structure with a tall clock tower rising over the main entrance. Designed by J. Riely Gordon, the courthouse was built in 1890-91 and was a unique departure from the traditional cross corridor plan of Victorian courthouse designs. Inspired by a desire to develop good lighting and a more satisfactory arrangement for natural ventilation of interior spaces, Gordon arranged all the offices and the courtroom around a 30foot square central courtyard. Numerous doors opened into this space, providing for cool breezes through the building. On the second and third floors, a two-story courtroom encompassed the west side. In the 1940’s, due to a need for additional space, the open court was converted into a vault and offices. The exterior reflects the broken massing of offices by a series of projecting pavilions on each facade. The four sides are similar in massing, consisting of a 5-part composition: a’ central entrance bay, flanked by two projecting gabled pavilion and recessed, crenellated, end section.

Texas’ most abundant building material–stone–was used to create rich detail in texture and color. The exterior walls displayed Belton white limestone and Muldoon blue sandstone in a polychrome technique. The two stones produce a checker- board effect in the gables, while the arches are richly expressed by alternating the voussoirs with the two different stones. Red Pecos sandstone emphasized the horizontal string courses and pink Burnet granite richly accent the columns and steps. The colonettes display acanthus-leaf capitals and some of the stonework displays detail. Located at the base of the clock tower is a large stone slab on which an American eagle is carved. At each end of the dentil work above the stone slab are the likenesses of griffins. Between the windows the pressed tin swag and patera motifs in the spandrels further embellish the building.
The east is immediately identified as the main entrance. A large recessed, round, arch shelters the double doors on the first floor, a segmental arch covers the second floor balcony, and the third floor contains an uncovered balcony. The third level contains three narrow windows crowned by pressed tin arabesque embellishment, semi-circular transoms and rounded arches. The dominating features marking the entrance is the pyramidal roofed tower with round arch and supporting coupled columns framing the openings.

The coupled windows on the projecting pedimented pavillions are grouped under a segmental arch on the first floor, while the second and third floor windows are organized vertically, linked by the pressed tin panel and ending in a semi- circular transom and round arch. The sides of the projecting pedimented pavilions and the recessed end sections have a slightly different organization with the first and second floor windows linked vertically under a round arch, while the coupled third floor windows have a horizontal lintel.

The alternate entrances are also arranged somewhat differently. The central bay on the north and south facades are sheltered by a two-story gabled portico containing a balcony over the first floor and a large round arch over the second. The central bay at the rear has a segmental arched opening over the rear entrance but the second and third floors, which contain the two-story court room, is enclosed on the exterior by a large round arched aperture containing three windows with transoms.
The hipped roof was originally covered with slate and Spanish tile, but is now of composition shingles.

A block from the Fayette County Courthouse stands the two- story, Masonry, Victorian Gothic Fayette County jail. Designed by Andrewarthe and Wahrenberger and built in 1881 by Fritz Schulte, the picturesque T-shaped structure contains both jailer’s quarters and cells. The building expresses a feeling of solidity in the use of rusticated limestone and emphasizes the architectural details with the smooth, polished stone.

The main facade consists of a large, gabled, central mass creating a slightly projecting tower pavilion at the center and two gabled end pavilions forming angular projections ‘~t each corner of the main mass. The first floor of the central projecting bay contains a double door with transom under a segmental arched lintel bearing the inscription “County Jail.” The second floor contains two narrow segmental arched windows, and a third level contains three small louvered, lances windows. Crowning this central portion is a stepped parapeted tower with a large lances arch opening, embellished with iron detail. The projected portion is emphasized by quoins on the lower half and pilasters with crennellated capitals on the upper portion of the tower. Additional details include decorative molding and corbelling.

The central portion and flanking indented bays constitute the central gabled mass. The angled corner pavilions complete the main facade and add interest to the rectangular hipped roof portion. On the first floor of the angled bays are two narrow windows with flat beveled lintels, grouped under a segmental arch. The second floor displays two windows with segmental lances arched lintels. Quoins embellish the pavilion until meeting the stringcourse at the second level. A small lances window creates a third level in the gable and the molded ,cornice and finial complete the bay.

A one-story pitched roof wing extends from the rear center of the hipped roof rectangular portion. Segmental arched windows are spaced along the east and west facades of the wing. The rear of north facade of the wing has angled end pavilions similar in scale to the ones on the main facade with narrow windows containing segmental arches and a round window in the gable.
Fayette County was first settled by members of Stephen F. Austin t S old Three Hundred. Named for the French hero of the U.S. Revolution, Marquis de La Fayette, the county was created by the Republic of Texas in 1837 and organized in 1838 with LaGrange as the county seat.

Several different structures housed the courthouse and jail before the present facilities were built. Because of the immediate need for a courthouse in 1838 a small building, formerly used as a grocery store, was moved to the square. Despite the lack of space, it was not until 1847 that a larger permanent courthouse was erected. Also built in 1838 at a cost of $460, was the county’s first jail, in which prisoners were ironed and chained. However, within ten years a new building was needed. After numerous plans and appropriations an attractive two-story brick building ‘was finally built in 1853. Fayette County citizens soon became concerned that the new brick jail looked better than the courthouse, thus a third courthouse was constructed in 1856. Built by H. L. Kreische and designed by William Rosenberg, the two-story masonry structure served the county until 1890.
The 1853 jail was remodeled in 1876, but by 1881 the old jail had proven inadequate to detain prisoners. In 1881 the county commissioners selected the design of Andrewarthe and Wahrenberger for a new prison and received the bid of F. Schulte for its construction. The jail was completed in 1883 and the iron fence enclosed the grounds in 1884.

By 1890 an examining committee reported that the third courthouse was in unsafe condition and recommended that a more substantial building be constructed. The county commissioners chose J. Riely Gordon of San Antonio as-the architect and Martin, Byrnes and Johnson of Colorado City as the builders.

A native of Winchester, Virginia, J. Riely Gordon had no formal architectural training. At the age of 18 he began his career in Texas by study and apprenticeship with the Waco architect, W. D. Dodson. In 1883 Gordon went to Washington, D. C. and worked under the supervising architect of the Treasury. Returning to Texas in 1887 he opened an office in San Antonio and soon became popular as a courthouse architect. Besides the Fayette County Courthouse, he designed the courthouses in the counties of Victoria, Bexar, Earth, Dallas, Brazoria, Ellis, Hopkins, Gonzales, Wise, Lee, Comal and Harrison. Following a national trend inspired by the work of Henry Hobson Richardson the style, frequently known as the Richardsonian Romanesque was quite fashionable in Texas in the 1890’s. J. Riely Gordon did some of his finest work in this style and most of his courthouses reflect his personal version of the Richardsonian Romanesque.

The Fayette County Courthouse and Jail, both serving their original functions, remain unchanged except for some interior alterations. 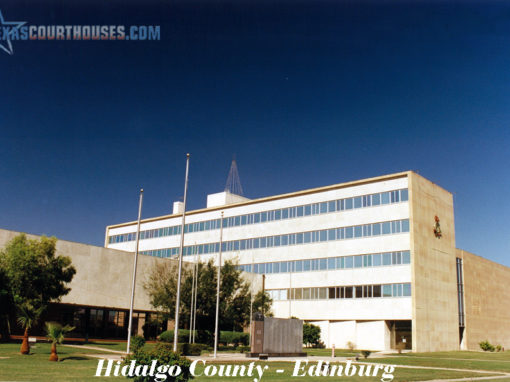 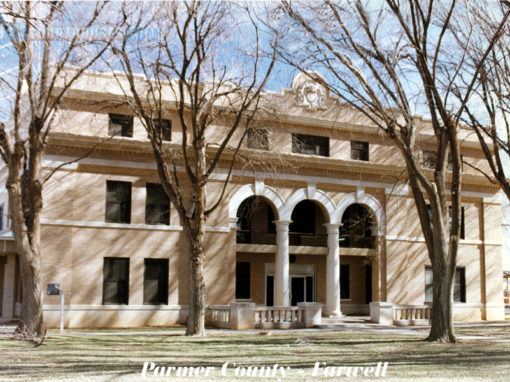