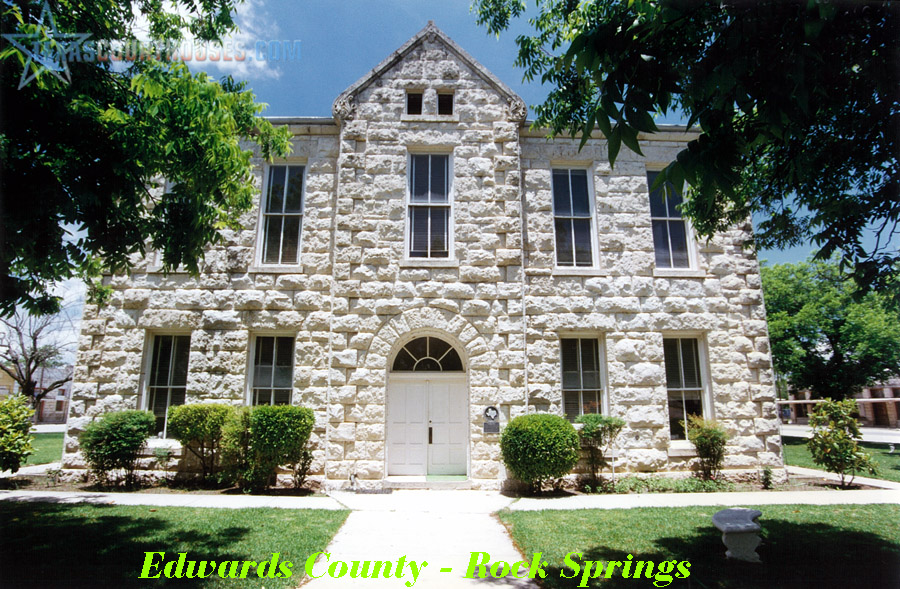 Displaying an eclectic style often associated with Victorian architecture of the late 1800s, the Edwards County Courthouse in Rocksprings is a dignified and durable structure which, 90 years after its original construction, still represents well its civic function. Built in 1891 of coursed native limestone, the straightforward architectural quality of the courthouse owes much to its emphasis on simple structural design, rather than elaborate detail. Decorative quoins, rugged voussoired arches over each entry door, and an unadorned string course beneath the hip roof’s cornice line all function as an integral part of the symmetrically proportioned facades. Wooden two-over-two windows, possibly the originals, have been regularly disposed about the courthouse, and embellished with simple sills and lintels. The focal points of the structure are its north-and south elevation pavilions. Edging the gables or these are the courthouse’s only elaborate ornamentation, raking cornices of smooth stone cut into intricately foliated designs. Set into the arched entry doors of each pavilion are simply fashioned, wooden fanlight transoms.

With several exceptions the Edwards County Courthouse has retained most of its 1891 appearance. Some restoration work was following fire damage in 1898, and a tornado in 1927 necessitated a new roof, the old one having been torn off. As it is known that the gable roofs were once Mansardic, it is possible that the original roof was also of this style.

Adjacent to the courthouse and built in 1895; the twostory Edwards County Jail is similar in design to the courthouse. Constructed of the same coursed limestone, it is partially topped by a hip roof with an additional pyramidal roof covering its southeast corner, accented by a finial. A string course and two rows of dentils of diminishing size also embellish this southeast portion-of the jail. The barred window and wooden framed door openings utilize the same lintel and sill arrangement as the courthouse.

For almost 90 years since its construction in 1891, the Edwards County Courthouse in Rocksprings has been in use as its community’s center of government, and continues to serve the area in this capacity. me first public building to be erected in Rocksprings F its rough cut masonry style, utilizing the state ‘s native limestone, is characteristic of Edwards County’s rugged landscape. me handsomely designed quality of the courthouse’s stonework is best appreciated on the gables of its north and south facades’, where it displays an ornate quality more commonly found on the more elaborate Romanesque Revival structures of the day. Currently in fine condition, the Edwards County Courthouse has been’ continually repaired and maintained through-out its many years of use.

Rocksprings had only been a year-old when a county election designated it the permanent county seat in 1891. Edwards County had been’ organized in 1883, but prior to this election, several other towns in the vicinity-had held this distinction temporarily, Leakey being the last. The final election to determine the permanent site was a hotly contested one between the towns competing for the honor, and it was said that armed men, anticipating trouble and prepared to fight if necessary, were needed to accompany the wagon carrying county-records from Leakey to their new depository in Rocksprings.

Until the new courthouse was constructed official county business was transacted at a local town store, but in June of 1891 plans and specifications were advertised for a new two-story courthouse. contract was let to Ben Davey and Bruno Schott of Kerrville for $18,000. Four years later they would also be awarded the contract to build the present jail for $4,’780, replacing a temporary structure which had been moved from Leakey earlier.

Since its original construction the courthouse has survived two potential disasters. An 1898 fire necessitated some restoration work, done by Davey and Schott according to their original building plans. The structure also miraculously withstood a devastating tornado in 1927, which killed 70 citizens and destroyed much of Rockeprings, but the solidly built courthouse sustained only roof damage.

One of the most notable local residents to practice law in the Edwards County Courthouse was the Honorable Claud H. Gilmer, who also made considerable contributions to the state as well. He began his political career as a practicing attorney and county judge in 1924′, and went on to distinguish himself as speaker of the house of representatives of the state legislature from 1943 to 1948. Though he chose not to run again his continuing political influence made him known as “The Balance Wheel of the 50th Legislature, and he has since been named to serve on several local and state education, election and conservation boards.

In 1973 the former legislator was chosen as the main speaker at the ceremony in Rocksprings commemorating its courthouse as a Recorded Texas Historic Landmark. 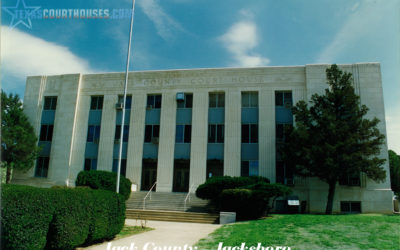 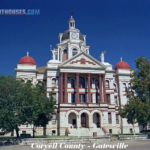