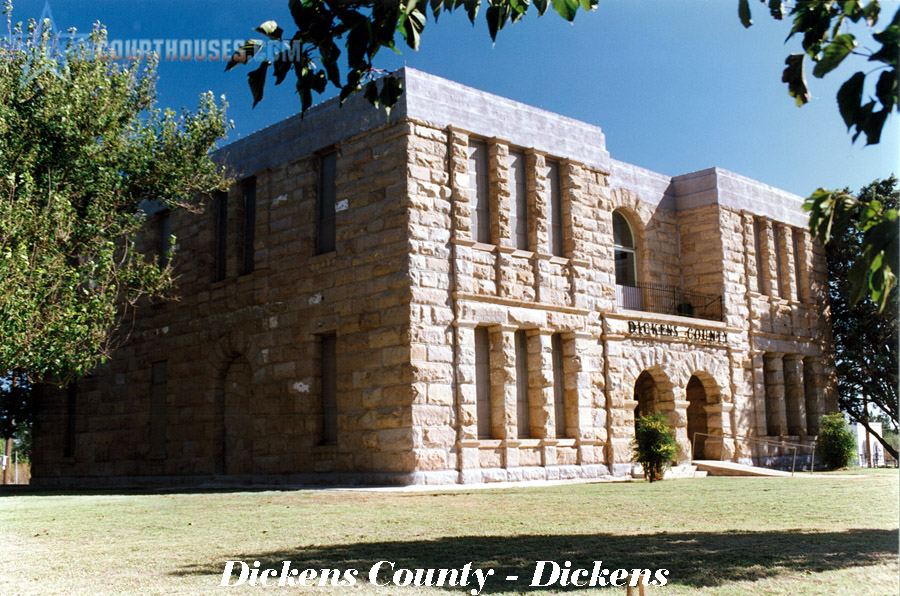 On May 9, 1892, the Commissioners’ Court met in regular session to order the issuance of bonds in the amount of $20,000 for the construction of a courthouse and jail for Dickens County. Following advertisement in the Fort Worth Daily Gazette, the County Commissioners met on June 13 to consider plans and specifications. The contract was awarded to E. L. Aiken of Hardeman County for a bid of $19,475.00.

On April 1, 1893, the Commissioners voted to receive the new courthouse, “having examined the building in a body and the same having been built according to the plans and specifications heretofore adopted.”
The court reserved out of the contract price the sum of $2,500.00 to cover any deficiency in the work as rewhiting the walls, completing the painting, putting in glass and removing rubbish.

The Dickens County Courthouse was built in the traditional quadrilateral form with a cruciform plan of intersecting halls defining county offices on the ground floor, and the county courtroom dominating the second floor. During construction contractor E. L. Aikens petitioned the Commissioners’ Court and received permission to build the stairway on the north end of the hallway instead of the south end of the hall as shown on the plans.

Built of a light-colored stone from a quarry two miles northwest of town, the building originally featured a polygonal central tower with a domed cupola. The four elevations were of simple rock-faced masonry with square windows and arched entries. The main entry on the west side was marked by a double arch and a recessed pedimented pavilion. At the north and south facades projecting ornamental balconies sheltered the entrance. On either side of the entrance a pair of chimneys rose above the roof line. A molded cornice and hip-roofed pavilion with round finials surmounted the whole.

On November 9, 1936, a contract was let to Nugent Construction Company of Spur to remodel the courthouse for the sum of $15,000.00. About 20 feet were added on the east side. A basement was incorporated into the addition for storage of county records. The central tower was removed and new doors and windows were added. The building was painted inside and out. A new heating system was added replacing the original wood and coal stoves.

On February 20, 1960, a contract was let to the West Texas Utilities Company of Abilene, to add a central heating and cooling system. Storm doors and windows were also installed. The remodeling cost a total of $10,139.34. In July 1962, a new vault was added to the county clerk’s office at a cost of $9,720.00.

The central tower and roof elements were removed and replaced with a flat roof and featureless cornice. Recently the paint has been removed from the exterior walls.

In November 1892, the Commissioners’ Court authorized the sale of bonds to finance a new jail. Subsequently the structure was completed by contractor E. L. Aiken. However, the jail did not meet specification and the court refused to accept it.
Over a decade passed before work was authorized for another detention facility. In 1909 the Southern Steel Company of San Antonio was contracted to build the present jail.

The Dickens County Jail is a two-story stone structure located northeast of the courthouse. It displays architectural detailing similar to the courthouse. The rusticated stonework symbolized the jail’s permanence and security. Facing south, the front facade features an arched main entrance with heavy stone voussoirs. The remaining openings on all elevations are tall rectangular windows capped with large stone lintels. The structure is still used as the county jail.

In the sparsely populated counties of West Texas, the courthouse building was often the dominant architectural feature on the landscape. As such, it became a prime influence on town layout and a focus of social and governmental activities. The Dickens County Courthouse is a typical example of the process and one of the earliest significant buildings in Dickens County. As an integral part of the historic development of the area, it is, therefore, worthy of preservation. It is among the few substantial nineteenth-century masonry buildings still standing in West Texas.

Dickens County was created in 1876 and named for J. Dickens, defender of the Alamo. After the organization of the county, the Commissioners’ Court met in Dockhum on April 1, 1891, and selected Espuela as the temporary county seat. Located 8 miles below the escarpment of the Llano Estacado, the townsite served as a supply point for an area where the first permanent settlements were dugouts serving as line camps for the Spur, Matador and Pitchfork Ranches. A store owned by W. R. Stafford was rented by the county for $15.00 a month and served as the county courthouse until the construction of a permanent building in 1893.

When the town was laid out a centrally located public square was set aside as the site of the courthouse. Commercial lots faced this public space on all four sides. By 1893 the new courthouse, a hotel, two stores and a wagon yard comprised the town.

Throughout its history the courthouse has been a center for social activity in the town of Dickens. During the early years of its occupation, it was the setting for justice and business transactions in the county. It also served as a meeting place for various groups of people. Today it continues as a center of county activity and houses, in addition to its official functions, a museum. In the buildings around the square are such functions as attorneys’ offices and senior citizens’ activities.
The Dickens County Courthouse was awarded the Texas State Historical Survey Committee’s State Medallion in December 1962 for its 70 years of service.

The Dickens County Jail represents one of the oldest structures in the small West Texas town of Dickens and has served as the county jail since its completion. 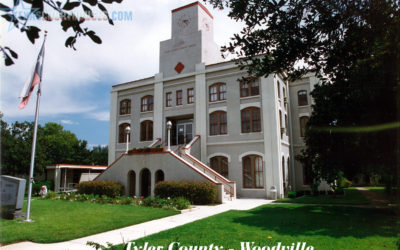 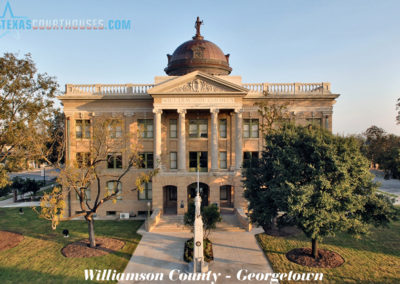