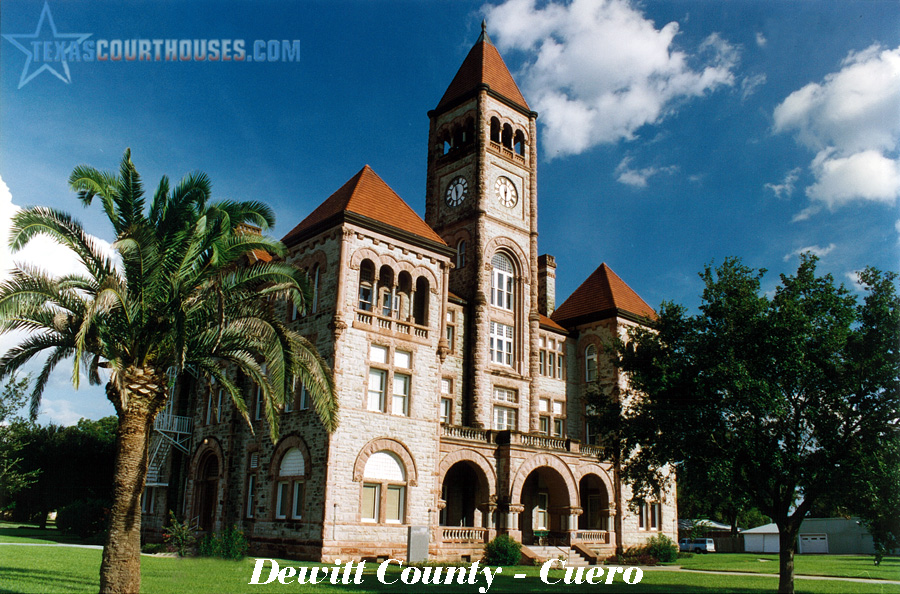 De Witt County Courthouse is a three-story sandstone structure with a six-story clock tower. The sandstone is rusticated throughout; the main fabric is of a cream color, the trim of red sandstone The building is Richardsonian Romanesque and the architect, A.O. Watson, was strongly influenced by the Allegheny County Courthouse in Pittsburgh, Pennsylvania. The plan is central and basically square with four corner pavilions. The roof is hipped and the main tower and the pavilions have pyramidal roofs. The main facade consists of a recessed triple bay section between flanking pavilions. The pavilions are united by a connecting arcaded one-story porch very similar to that of the Pittsburgh building. The tower rises behind the central bay, and is also in the style of Richardson’s building. The paired, single pane, first story windows of the front and sides of the DeWitt County courthouse are set in large arched openings with stone transoms and a grill in front of the glass in the arched opening above. The windows at the back, those in the arcade, and the second story windows are one- over-one light double hung sash type with stone lintels and single pane transoms with grills above. The scheme of window placement in the pavilions is that of one large arched opening at the first story, two treated windows at the second story, and two trabeated windows set behind a four- bay arcade at the third story. Balustrades define these arcades and are also used between the side arches and as a protective railing above the main port. The clustered columns of the porch are of the squat Richardson type with Romanesque revival capitals. The large arches spring low and have rusticated voussoirs finished with a drip-mold archivolt. All projecting corners of the building have decorative quoins of narrow stones–alternately placed on end (and extending three courses vertically) and on their sides. The pavilions have engaged columns at the corners at the third story. The corners of the tower have rounded edges or rusticated engaged columns at its full height. The second, third and fourth story windows of the tower are vertically grouped under a colossal arch. The four clock faces are simply and effectively framed by radiating rusticated voussoirs in an inset square panel. The top story is open with a three bay arcade.

In 1956 the Guido Brothers Construction Company of San Antonio modernized the interior and central air-conditioning and automatic elevators were installed.

The DeWitt County Courthouse is a late nineteenth century Texas building strongly influenced by H. H. Richardson’s Allegheny County Courthouse (1884-88) in Pittsburgh, Pennsylvania. The county is in south central Texas and was created in 1846 out of parts of Gonzales, Goliad, Victoria counties. The area approximated that of the original 1825 Mexican grant to Empresario Green DeWitt.

The courthouse is located at Cuero, the present county seat of DeWitt County. Cuero, named for nearby Cuero Creek, had been originally projected as a town in 1842, but its establishment was unsuccessful at that time. “Cuero” is the Spanish translation of the Indian word for “hides”. Cuero was finally established by John C. French and Gustav Schleicher who laid off a town in January, 1873, to serve as the terminus of the Gulf, Western, and Pacific Railroad. Thirty years of bitter feuding between towns had passed before Cuero was chosen as county seat in 1876. Between 1846 and 1876 the county records were moved at least four times. Three expectant towns built courthouses of varying permanency. Clinton held the county seat from 1840 until 1876, when the final move was made to Cuero. The Commissioners paid $1,100 to move and repair the former frame Clinton courthouse to the site of the present courthouse in Cuero.

This building burned April 8, 1894, and the D. W. Nash School was rented for temporary quarters. Bonds for $70,000 were issued and a contract awarded to A.0. Watson of Austin to design and construct a new building and to include furniture for offices and courtrooms. The building was completed by builder Eugene Heiner of Houston in 1896.

The city of Cuero was on an immigrant route. Germans constituted the majority of the population by 1860. In 1940 75% of the white population was of German extraction. 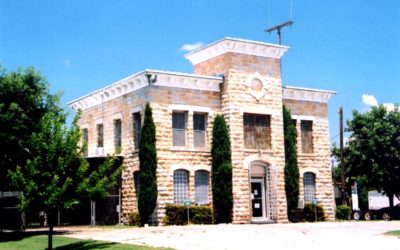 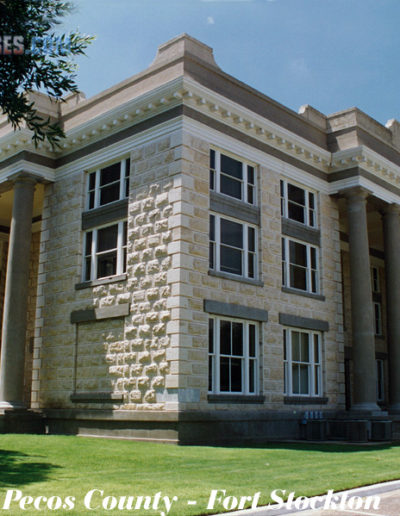