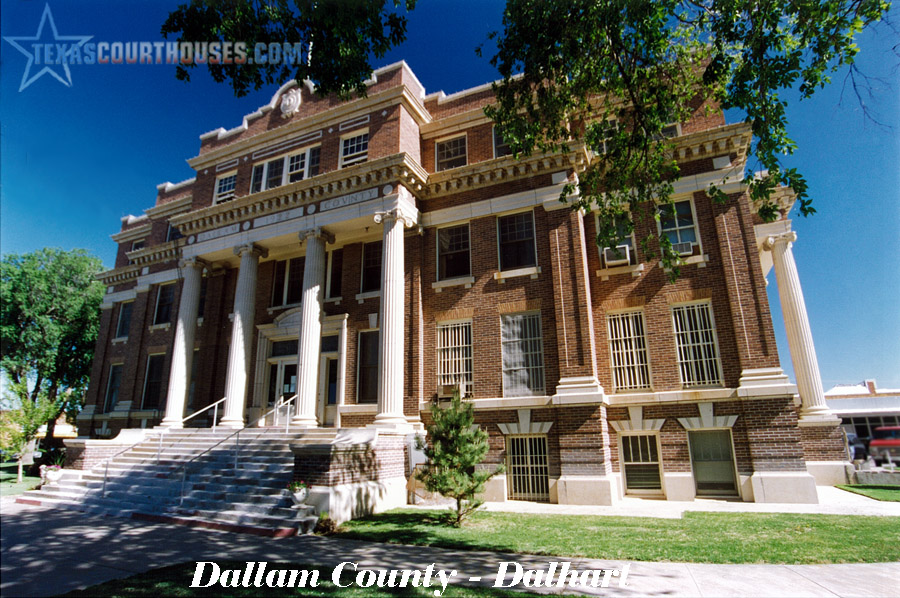 The 1923 Dallam County Courthouse, in the Texas Panhandle, exhibits features typical of governmental buildings constructed during the resurgence of classicism in the early 20th century. A three-story red brick building with a half-basement, the courthouse has a rectangular plan and a flat roof. The interior reflects Beaux Arts planning influences with central cross axe and classical detailing. Facing south on Fifth Street in Dalhart, the building occupies a block at the center of the brick-paved town. The site is flat, with a cultivated lawn and several mature trees planted around the building. In excellent condition, the courthouse retains its historical and architectural integrity to a high degree.

In the semi-arid region of the Great Plains, Dallam County is prairie land, broken by creeks, none of which are proximate to the courthouse. Dalhart, the county seat, is near the southeast corner of the county. The southern portion of the town (beginning at 11th Street) is in Hartley County. The Fort Worth and Denver and the former Chicago, Rock Island and Gulf (currently the St. Louis-Southwestern) railways intersect in Dalhart about four blocks north of the courthouse. North of the tracks much of the community follows a grid plan oriented on a northwest-southeast diagonal, while south of the tracks the grid plan is laid out on the cardinal directions. (See MAP 8.)

Although the courthouse visually dominates the block, it is not centered but set back so that the primary (south) elevation fronts an extensive lawn, while the rear (north) faces an alley. Vegetation in the region is historically sparse, but the courthouse’s modest landscaping scheme includes mature elm trees, juniper and crepe myrtles. Historic photographs reveal that such features were introduced with settlement and have always been minimal. Three subordinate monuments on the courthouse grounds include a 1945 memorial to Dalhart high school students who died in World War II (concrete base, bronze place and flagpole), a 1986 sesquicentennial commemorative marker (stone base with wrought iron impression of XIT Ranch), and a 1991 Official Texas Historical Marker (see site plan on MAP 9).

The 5-bay main (south) facade has a centered, projecting portico supported by four colossal order Ionic columns capped with a classically influenced entablature (see Photograph 1). The double entry doors are surrounded by transom and side lights and capped with a heavy segmental pediment. Windows on either side of the door are 1/1 surmounted by radiating brick voissoirs and a keystone. brick pilasters with cast stone detailing enunciate each 90 degree angle of the building. A cast stone water table encircles the building near its base, as does a cast stone string course above the second level windows and a cast stone denticulated cornice. Simpler cast stone cornice projects above the third level windows, continuing as the entablature above the entry columns. Cast coping outlines the stepped parapet, which has an “Alamotif.” Most windows in the building are 12/1, with 4/4 and 3/3 windows denoting utilitarian spaces within. Protective bars shield the clerks offices and the old third floor jail spaces. A circa 1923 photograph shows standard light posts with multiple globes that once stood to either side of this facade’s entry stairway; these were removed by about 1940, according to another historic photograph (see Photographs 2 and 3). A marble cornerstone is at the west corner of this facade (see Photographs 4 and 5).

The east and west facades follow a similar pattern (see Photograph 6). Each has 3 bays with a centered projecting two-story portico supported by two colossal order Ionic columns and crested with the classically influenced entablature that wraps around the building. Stairwells access the basement entrances, which are multi-paned double doors with transoms and sidelights. Although the rear (north) facade echoes the detailing of the other elevations, it lacks a grandiose entrance (see Photograph 7). It has a small centered entrance to the main floor, (enclosed with a frame vestibule) and a metal fire escape servicing the second and third levels.

A central east/west corridor divides the basement, which is sunk a half-story, into office quadrants. Entry to the basement from the exterior is by the two stairways on the east and west sides of the building (see MAP 10). The main office floor is raised high above the ground and houses county offices as well as the county court room. Primary exterior access to this first floor is from the south side of the building (see MAP 11). On the second and third floors, offices surround the two-story district courtroom (see MAP 12 and Photograph 8). The balcony of the courtroom is currently used for storage. The interior remains largely intact and exhibits modest classical detailing, such as Ionic columns and deep cornices (see Photograph 9).

The Dallam County Courthouse retains its integrity to a remarkable degree. In particular the property’s architectural character (location, setting, design, materials, and workmanship) remains virtually unchanged. With these physical features intact, the building clearly maintains its historic associations and feeling.

Texas courthouses, as the pre-eminent building type associated with local government in Texas during the mid- 19th through mid 20th centuries, symbolize the general prosperity, aspirations, and sophistication of the counties in which they stand. Serving as the local seat of justice since 1923, the Dallam County Courthouse played a pivotal role in county politics and meets Criterion A in the area of Politics/Government. An unprecedented building in the county and the town, the courthouse also meets Criterion C in the area of Architecture as an exceptional local example of Classical Revival design.

In the extreme northwest corner of the Texas Panhandle, Dallam County is bounded by New Mexico on the west and Oklahoma on the north. Parts of this and nine other north Texas counties comprised the three million acre tract the state traded in 1882 to finance construction of the state capitol in Austin. The resulting XIT Ranch once operated on much of the land now chartered for Dallam County.

The Fort Worth and Denver City Railroad linked Fort Worth with Texline, near the northwest corner of the county in 1888. Officially organized in 1891, Dallam County was named for James Wilmar Dallam, a prominent Texas lawyer and editor. With approximately 112 resident in the county, Texline served as county seat with a two-story frame courthouse/school.

In early 1901 the Chicago, Rock Island, and Mexico Railway (later the Chicago, Rock Island, and Gulf Railway) built west from Liberal, Kansas, and crossed the Fort Worth and Denver City line at the southern boundary of the county, a juncture that hastily changed names in early 1901 from Twist, to Twist Junction, and then to Denrock. By May 1901 the community, which traded both Dallam and Hartley counties, became known as Dalhart. In 1903 the County commissioners’ Court ordered that a new courthouse be constructed on Block 18 of the original townsite; John A. White of Vernon was awarded the building contract (see 8-5; demolished circa 1922).

A 1919 editorial in the Dalhart Texan stressed the need for a modern courthouse facility. Commissioners issued warrants to fund the project, but construction was enjoined in 1920. Postponements and litigation ensued. Finally, a $150,000 bond issue passed in June 1922 enabling the court to hire J. Roy Smith and William C. Townes of Amarilloas architects and A.F. Stewart of the Stewart Construction Company in Oklahoma City as contractor for the new courthouse. They selected Block 51 of the original townsite as its location.

The plan of this building reveals a Beaux Arts arrangement in spatial hierarchy by raising the main floor high above the ground with an entry point from the south facade of the building. The basement is sunk a half-story with access from two stairways from the east and west sides of the building. This simple innovation assisted in adapting the basement as more efficient public space, while a majestic staircase endowed prominence to the main entrance.

The subsequent history of the courthouse has been one of few sensational trials or great events. However, as in most counties, the courthouse was the nucleus of political and social activity. Courthouse hearings have been generally for crimes of stealing cattle, bootlegging and gaming, according to Hartley County Historical Commission Chairman Patricia Kirkeminde.
The building retains its historic integrity to its period of significance, 1923-1942, with some interior modifications such as ramps and an elevator added in 1987 to permit accessibility for disabled citizens. A monumental building in this small community, the Dallam County Courthouse is worthy of preservation because of its contributions to the county’s historical and architectural legacy. 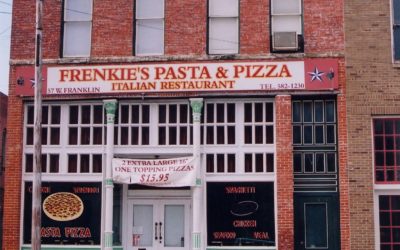 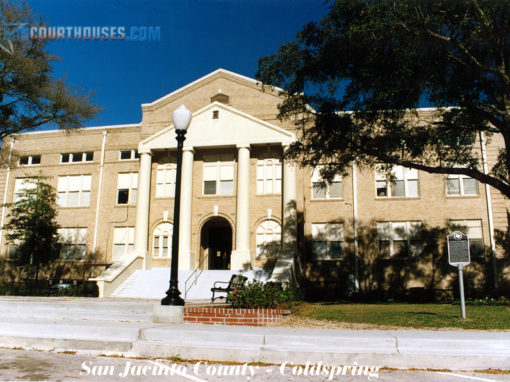