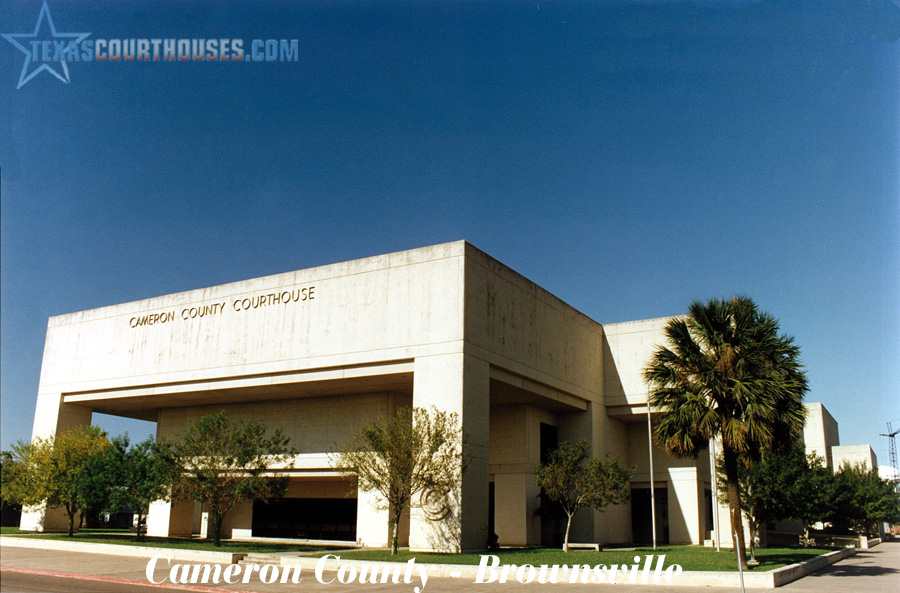 The Cameron County Courthouse is a rectangular building that extends approximately 170 feet along its north and south facades and 100 feet along its east and west facades. It has three stories and an elevated basement. The building is constructed of reinforced concrete and steel framing, The wall finish is brown bricks of running bond and terra cotta trim. A terra cotta watertable extends around the perimeter. The first floor consists of brick banded courses. The banding is made of six courses and a recessed one. There are six rows of this bonding. At the second floor a terra cotta band extends around the perimeter. The second and third floors have recessed brick panels inset between brick pilasters. The pilasters have terra cotta Corinthian capitals which support a terra cotta’ architrave and cornice with dentils. A brick frieze above the first cornice has cast-iron vent) rating grilles and terra cotta brackets which extend to a second terra cotta cornice. Above each of the four entrances are two full tapered half circle columns and a quarter column on each side. Each column is-capped with a terra cotta Corinthian capital. A terra cotta shield on top of the cornice above each entrance bears the inscription “1912”. The inscription “Cameron County Courthouse” is located on the frieze. A granite cornerstone occupies each exterior corner of the building.
At the center of the four facades is a projecting colonnaded porch. The front portion of each porch has three terra cotta framed openings a large one flanked by smaller ones. The sides of the porch have a window-like terra cotta framed opening. Each porch has seven granite steps, a terra cotta rail and a pedestal on both sides of the steps. The porches have plaster ceilings and a plaster cornice with a terra cotta band below the cornice. A concrete bulkhead is located to the right of the porch on the north facade. The bulkhead contains a concrete ramp and steps which lead to the basement. The doorways to each entrance have a deep recessed stone surround and an arched, beveled glass transom. Large, heavy, wooden framed doors have a full length beveled glass panel, wooden surrounds, brass thresholds, brass hardware, and a large brass kickplate. The doorway to the basement through the bulkhead has a double leaf, wooden paneled door and an i-roe gate across it.

Double wooden windows with one-over-one single hung sashes and a transom above occupy all three floors of the building. The windows have terra cotta surrounds, terra cotta lintels, and terra cotta sills as well as wooden sills. Some of the windows have been removed and the openings have been plastered over. Brick spandrel panels separate the windows of the second and third floors. The windows in the basement have one light and are hinged at the top. They are also covered with iron bars.
The building has a flat roof which consists of a concrete deck and built up asphalt covering. The roof has a brick parapet and a wood shed roof hatch. A brick chimney extends up from the basement through the roof northwest of center. At the center of the roof is an octagonal lantern that has Balvanized louvers around its brick walls. The lantern has a built up roof on its sloping panels. Above the lantern is an octagonal skylight with sloping wire-glass panels. Metal louvers surround the walls of the skylight.

On the first floor of the building corridors lead from each of the entrances to an octagonal rotunda. The quadrants formed by the corridors contain offices. The floor plans of the second and third floors are similar to the first, except that a circular central passageway runs around the rotunda on the second and third floors.
Stairways are located on both sides of the west corridor to connect all three floors, but only the southwest one leads to the basement. The steel, close string, dog- legged stairways have marble treads and risers leading to each floor. A decorative wrought iron railing extends from a large wrought iron newel at the basement all the way to the third floor with a newel at each landing and floor, except for the third floor where the iron railing turns and ends at a half newel at the wall. The newels have a pendant extending below the ceiling at each landing and floor. A wooden handrail is mounted on top of the iron railing. This same railing extends around the rotunda on the second and third floors. A metal spiral stairway with a pipe handrail extends from the second floor to the roof.

The major passageways through the building have white and black mosaic tile flooring, bordered and patterned, with a marble base. Some office spaces have vinyl asbestos tile floor covering and many have carpeting. The basement floor is concrete.
The walls and ceilings of the three main floors are of plaster, although some of the offices have modern wood paneling. Marble wainscoting extends along the walls of the first and second floors and in the stairwells. The walls of the basement are of brick and wood paneling; its ceiling is the exposed concrete structure. On the first floor the corridors have covered barrel vault ceilings. Plaster Sullivanesque decorated raibs between the coffers extension down the walls to pilasters capped with plaster Corinthian capitals. Pilasters also occupy the intersections of the angles of the octagonal rotunda. The arched openings leading into the rotunda have Sullivanesque plaster decorations on the laces and soffits of the arches. On the third floor the plaster arch over each face of the octagon has Sullivanesque decoration and an ornate shield at the keystone.
The dome over the rotunda is art glass with decorated plaster ribs. A large light fixture hangs from the center of the dome. It has a center frosted glass shade and twelve branches which also have frosted glass shades. In the center of the coffers in the first floor corridors are large glass sphere lighting fixtures. Most of the offices have modern lighting fixtures. The building is served with a modern heating and air conditioning system.

Most of the doors in the building are wood paneled with a glass panel at the top and a patterned frosted glass transom. The wooden architrave has wood panel like trim and plinth blocks. Some doors, however, are modern aluminum store front with aluminum thresholds. The doorways leading to the offices on the first floor are located in the center of the coffered panels in the ceiling.

The building’s main distinction, however, is that it was designed by Atlee B. Ayres, one of Texas’ most eminent architects. Atlee designed many major buildings in San Antonio and elsewhere in the state during his long and distinguished career. In addition, he was also instrumental in securing professional recognition for architects in Texas.

Atlee’ Bernard Ayres was born on July 12, 1873 in Hillsboro, Ohio, His family moved to Texas about 1879, settling in San Antonio in 1888. In 1890 Ayres went to New York to study architecture at the Metropolitan School of Architecture which was connected with Columbia University. He also studied at the Art Students League and took painting from Frank Vincent Dumont. After graduating in 1894 he returned to San Antonio and began working for several San Antonio architects. He practiced architecture in Guadalajara, Mexico for about two years, only to return to San Antonio in 1900 to open his own practice loaned by his son, Robert, in 1924, the firm became Atlee B. and Robert M. Ayres. Together they received widespread recognition for their work in American Architect, the Architectural Record, and Pacific’ Architect; the Avery Index to-Architectural Periodicals lists several entries dealing with their work. Ayres was a writer himself. In 1926 he published a book on colonial architecture in Mexico entitled Mexican Architecture.

In 1937 Ayres and two other architects were instrumental in securing passage of state legislation for the licensing of architects. Ayres himself received Texas License No. 3. Ayres was also a charter member of the Texas Society of Architects. Ayres was the recipient of many honors including being appointed State Architect by Governor James Ferguson. In 1931 when Ayres was fifty-eight years old, he was made a fellow of the American Institute of Architects in Washington, D.C. In 1938 Secretary of State Cordell Hull delegated him to represent the United States at the 16th International Congress of Planning and Housing in Mexico City. At the time of this ninety-third birthday in 1966, the American Institute of Architects believed that he was probably the oldest practicing architect in the United States. Atlee B. Ayres died on November 6, 1969 in San Antonio. Today his firm continues its many years of successful practice under the direction of his son, Robert M. Ayres. 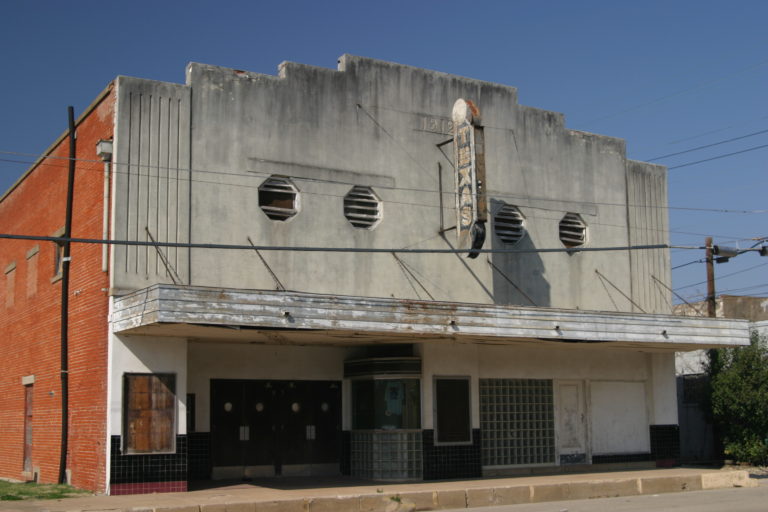 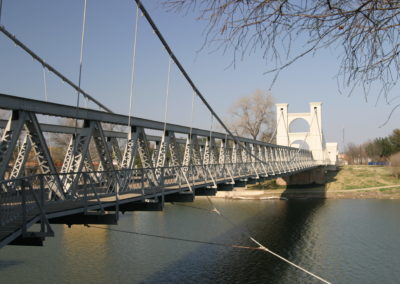