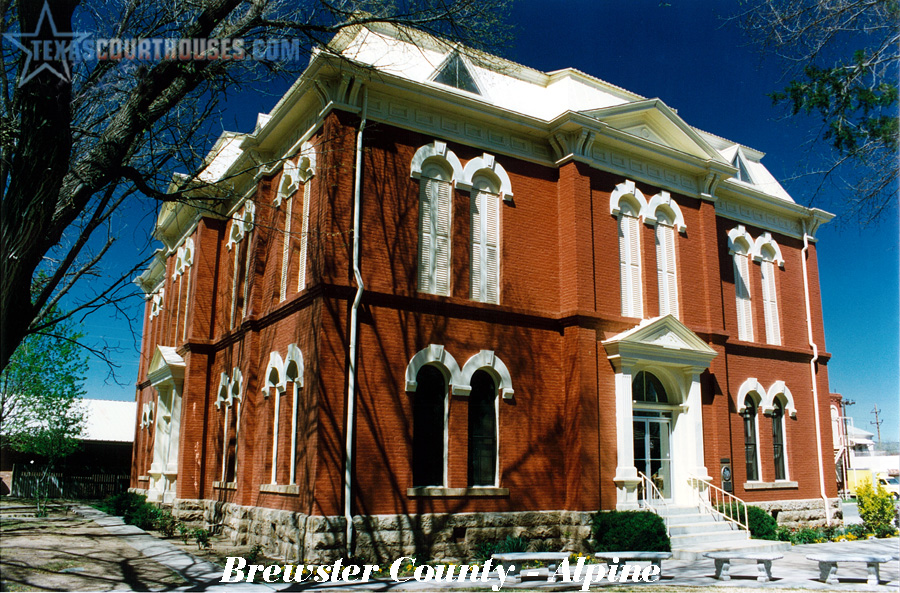 Constructed in 1887 in West Texas, the Brewster. County Courthouse is an interesting local “vernacular” interpretation of an architectural idiom which was to become known as the American Second Empire Style. This two-and-one- half story brick building laid in Common bond is rectangular in massing with thin, elongated pavilions advancing slightly from the center of each facade. No corner towers, which would be expected in this style, are in evidence.
All four facades are comprised of pairs of elongated, round arch window openings surmounted by curved, pressed-tin hood molds with a single voussoir on center. The window openings on the second story are slightly longer than those on the first story. Each bay of paired windows is delineated by vertical brick strips or referential pilasters. The Brewster County Courthouse rests on a small base of rusticated local limestone with a brick belt-course separating the facades between the first and second stories.

The shorter east and west facades are comprised of three bays of paired round arch window openings with a pressed-tin “frontispiece” doorway on the first floor pavilion comprised of a triangular pediment supported on single Doric pilasters resting on single paneled podiums, and a semicircular, two-pane light over paneled, wooden double doors. The longer north and south facades are comprised of two stories of five bays of paired round arch windows with similar pilaster strips. The north facade has no doorway and the recent addition of a two-story brick wing to the northwest half of this facade has obscured the two northwest bays and part of the north pavilion. The south facade has a similar pressed-tin “frontispiece” doorway, although the door itself has been removed and replaced with a twentieth century aluminum frame window. All original window frames (wooden, double-hung, four-over-four-light sash) have survived, with the exception of those on the second story of the east facade and portions of the second stories of the north and south facades. These have been replaced with fixed wooden shutters.

A pressed-tin entablature, comprised of a paneled frieze and a cornice, surmounts the building. Pairs of pressed-tin brackets are incorporated within the entablature and reflect the spacing of the brick pilaster strips below and serve as referential (or interpretative) capitals to them. Pressed-tin triangular pediments crown the pavilions throughout. The radically hipped, wood-framed, pyramidal roof of standing-seam-tin is capped by pressed-tin cresting in the pattern of a cornice. Triangular, two-paned dormers punctuate the roof line: four each on the north and south facades and two each on the east and west facades. Originally, each pavilion was capped with a large attenuated Mansard-like roof with a single round arch four-light window. These, however, were removed in the second half of this century.

The first floor of the wood-frame interior is bisected by a center hall on the east/west axis dividing offices equally on both sides. Exemplary pressed-tin ceilings and some of the original woodwork have survived. A handsome wooden staircase with “Eastlake-like” details rises from the first floor to the General Courtroom on the second floor. Extensive remodeling has taken place on the second floor. However, much of the original fabric has been maintained beneath the new paneling and above the newly lowered ceilings.

Also constructed and presumably designed by Tom Lovell in 1887, the Brewster County Jail building is a two-story brick structure of an “L” plan and massing laid in common bond. In 1921, an addition was added to the south side of the pile conforming and, therefore, preserving the “L” shape massing. A rusticated stone base of local limestone rises several feet on the jail complex. However, the most interesting and wholly outstanding architectural detail is the fine brick crenelated parapet wall which crowns the flat, wood framed roof. The choice of this “detail” in contrast with the quasi-Second Empire detailing on the contemporaneous Courthouse is an interesting testimony to the symbolic implications, vis a vis qualities, of “fortress- like impregnability” which must have been important design parameters to the builder and the County Commissioners. Several corbeled chimneys rise from behind the parapet wall.

Window openings throughout are round arch with brick hood molds and brick sills on the unaltered openings and stone sills on those windows which are added in the 1921 addition or those affected by that addition. The original windows (wood frame, double-hung, two-over-two-light sash) have survived. Requisite iron bars exist on the exterior of windows where they were deemed appropriate for security.

A one story wood frame porch on a stone base supported by wooden Doric columns on brick podiums was constructed at the interior intersection of the two “L” wings. A flight of stone steps to the porch gives the only access to the building.
The first floor interior of the Brewster County Jail is arranged around the quarters and offices of the sheriff and staff. The second floor contains freestanding iron cells provided and built by the Diebold Safe and Lock Company–an unusual situation in Texas where the Pauley Jail Building and Manufacturing Company dominated the field. Little of the original interior detailing remains.

The Brewster County Courthouse and Jail Building, like so many other such complexes in the other counties of Texas, traditionally were and still remain the physical and governmental focal point of the community of Alpine and the larger community of Brewster County. In an age where these traditional seats of government are often demolished or substantially denatured, the Brewster County Courthouse and Jail Building have survived remarkably. They deserve to continue to do so. Both buildings possess historical significance in that they have served as the government seat of Brewster County (the largest of Texas’ counties) since their inception in 1887. Architecturally, both buildings dominate the community of Alpine as excellent examples of locally interpreted nineteenth century styles.

The territory of Brewster County has been under a number of political jurisdictions. Originally considered part of Chihuahua, Mexico, during Spanish and Mexican rule, the area was later attached to Bexar County following Texas independence. From 1848 to 1887 the Brewster County area was under the jurisdiction of Santa Fe County (1848), El Paso County (1849-1871), and Presidio County (1875-1887). When the Presidio County seat was moved from Fort Davis to Marfa, dissatisfaction among residents in this area led to the creation of Brewster County in 1887. Murpheyville, renamed that year as Alpine, became the county seat.

Built in 1887, the Brewster County Courthouse and Jail were the first monuments to the newly organized county and continue to serve in their original capacities. Only a few Texas counties still utilize either their first courthouse or jail. The Brewster County complex also holds the distinction of serving Texas’ largest county with an area of 5935 square miles. The county was enlarged to its present size in 1897 when the proposed Bushel and Foley counties were abolished and their territory added to Brewster.

As an architectural entity, the Brewster County Courthouse presents an interesting and rather sophisticated local interpretation of the Second Empire Style. Tom Lovell, the local nineteenth century contractor and presumed designer, showed a substantial comprehension of design, massing, fenestration, and detailing making the Brewster County Courthouse one of the finest buildings in Brewster county. 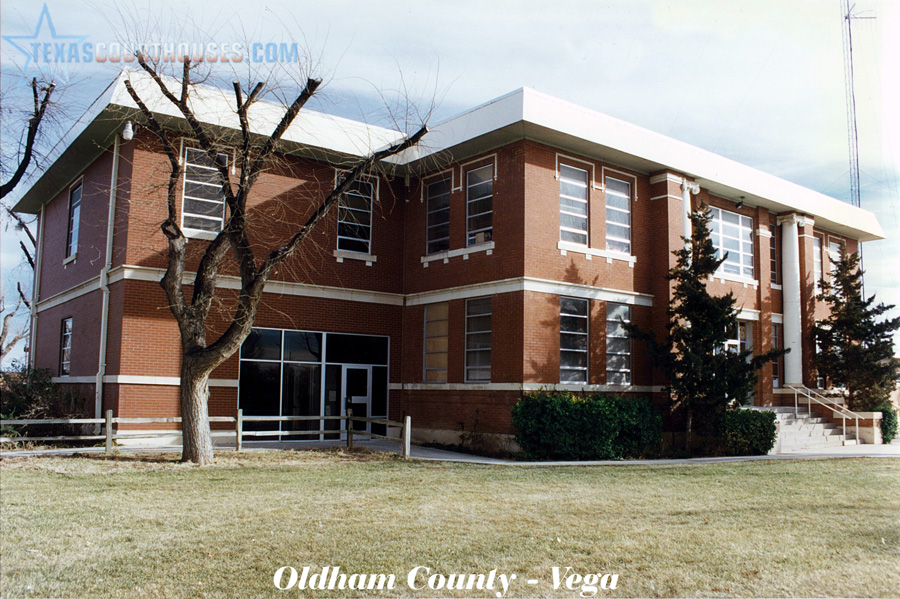