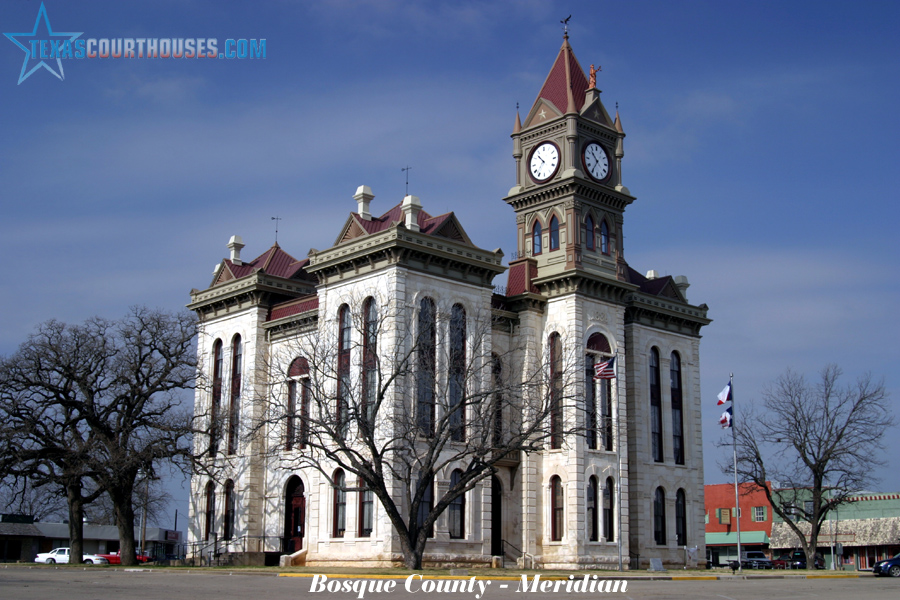 The Bosque County Courthouse is located in the center of the public square of a town laid out in 1854 and a county created also in 1854. Located near the geographical center of the county (named after the Spanish term meaning woods), the town (named after a nearby stream) was platted by George B. Erath.

The present courthouse was the fourth in the county. The first, a one-room cabin with walls of vertical pickets and hand-riven oak weatherboards erected in 1851 on a lot north of the public square, served until 1860; the second courthouse, a three-room frame building, burned in 1871; the third, a two-story stone structure, forty-six feet square and erected in 1875, served until some county residents determined that a new modern edifice was needed.

Constructed in 1886-1887, the fourth courthouse was controversial since many residents believed that a proposed $60,000 edifice would bankrupt the county. Reportedly, the intensity of disagreement between the “courthouse party” and the “anti-courthouse party” reached riot intensity at the time the 1875 edifice was to be razed. However, peace prevailed but today this dispute over construction is reflected on the cornerstone, where the names of the county judge and only two of the four county commissioners appear.

Although the courthouse was centered on the square, requiring the usual entrance on each of the four sides, the plan, 83 feet by 85 feet 6 inches overall, differed slightly from some of the courthouses built in surrounding counties. On the south, west, and north sides, the doors are centered but on the east, where the dominant tower was located, the entrance was shifted off-center to allow a ground-floor courtroom to be centered under the symmetrically positioned tower. Also on the ground floor were located the offices of tax collector, county judge, county attorney, and county treasurer.

On the second floor were the district courtroom, offices for district judge, district clerk, and others. The courtroom extended the length of the building on an eastwest axis and was entered at the sides from stair landings on the north and south–an efficient arrangement or circulation. The judge’s bench was located over the ground floor courtroom in the projecting mass framing the base of the tower.

The courthouse was built of beautiful white limestone obtained from a quarry near Meridian. Specifications called for the footings of the exterior walls to be five feet in width and made of stone. These along with the foundation wall up to the level of the watertable were to be set with Portland cement mortar; above the water table lime mortar was used throughout. The wall from grade line to the watertable was battered three inches and was constructed of pitch-faced ashlar. Above this level fine cut stone was used for the exterior walls. Hard limestone was employed for the steps and door sills.

The interior was finished in straightforward fashion, with walls plastered and painted white. “White pine” was specified for doors, door frames, and window sashes; “Texas pine” was specified for the window frames. The courtroom ceiling was stamped galvanized iron; the floors were finished with concrete; and the stairs were fabricated from cast iron manufactured by J.E. Bolles, Detroit, Michigan. Glass was to be “Saint Louis best plate.”

Above the walls rose the roofs which were composed in picturesque massings. Over the corner pavilions were hipped roofs connected by mansard roofs, all covered with metallic shingles in diamond patterns. Flat sections of roof were covered with tin with standing seams and the tower was clad with stamped galvanized iron components. A cast-iron cresting decorated the ridges of the roofs.

In 1935, supported by funds from the Federal Emergency Administration of Public Works, alterations were made to the courthouse and an addition was made to the west side. The tower was removed along with the hipped roofs over the corner pavilions and the mansard roofs were replaced with walls. Roy E. Lane was the architect and O. K. Johnson the contractor for these alterations.

The building possesses considerable architectural merit due to its association with a prominent West Texas architect, its stylistic character, and the technology incorporated into it. Moreover, throughout its history the building has remained the most prominent structure in the county. Early in 1886 the Commissionaires Court of Bosque County announced that on February 23 they would examine plans for a new courthouse. The following day, J. J. Kane of Fort Worth, Texas, was appointed architect and awarded a commission of 5% of the construction cost–Kane designed numerous structures in West Texas including a Catholic Church, Fort Worth, a monumental stone edifice, and he served as the president of the Texas Association of Architects in 1888.

As was often the case during the last two decades of the nineteenth century, stylistic features intended to produce picturesque, yet dignity of expression were incorporated into the courthouse. Roman arches rising above slender engaged columns, and heavy rusticated pilasters reflect the Renaissance Revival style. On the ground story the arches have pronounced keystones while on the top story the arches have gracefully molded archivolts. Also consistent with the classical style, a well defined base formed the beginning of the wall composition and a bold galvanized-iron cornice formed the termination. Handsome rosettes carved from stone accent the pilasters and ornamental stone details terminate the wall below the cornice. The tower, however, had Gothic details, including small turrets on the corners. Other elements not associated with style but rather with the expression of purpose included the statue of justice, stamped from copper, and star motifs.

The structure also incorporated noteworthy technology in a relatively isolated location. Aspiring to develop fireproof construction, J. J. Kane utilized iron and concrete floor systems. The ground floor consisted of a rough four-inch Portland cement concrete slab placed over a fill of broken stone, sand, and waste material; then a coat of Portland cement concrete was placed and “blocked off in nine-inch squares.” The second and third floors were supported by iron I-beams which supported corrugated iron arches over which was placed concrete, blocked into squares. 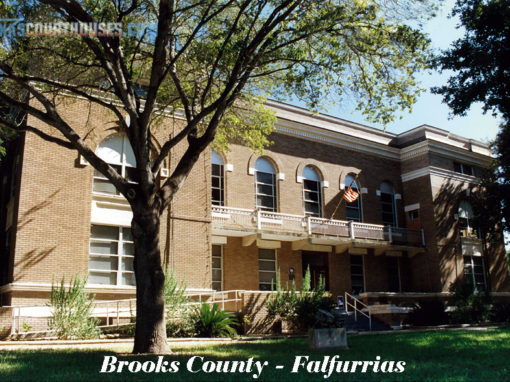 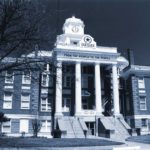