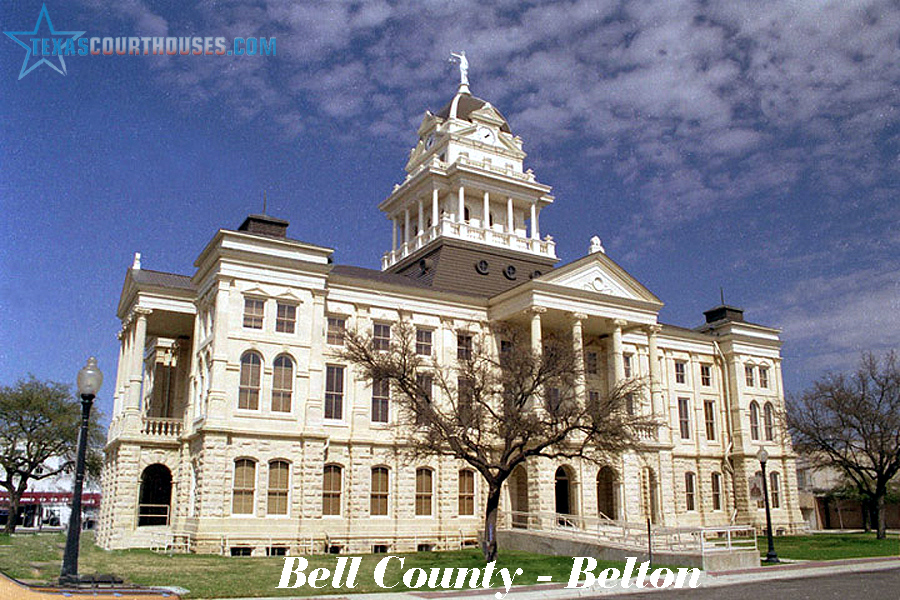 The Bell County Courthouse, in a manner typical of many Texas courthouses of the period, occupies a single block reserved within the grid of streets. Four uniformly porticoed facades give equal prominence to the surrounding commercial blocks.
Imposing in mass and appearance, the building was designed in 1883 by J.N. Preston and Sons of Austin in the Renaissance Revival style. Three stories in height and measuring 155 by 76 feet, it was constructed of a goldenhued stone from a local quarry. A lower story of pitch-faced ashlar is separated from the upper portion of cut stone by a modest string course. Horizontal articulation is emphasized by continuous pilasters with molded caps and bases between each vertical course of windows. The four elevations consist of five elements. The central feature, an entrance pavilion, rises from a one-story base of rusticated stone with a portico above supported by cut-stone columns with carved capitals and bases. On either side are flanking bays terminated at each corner by a protecting pavilion.

As built, the courthouse was dominated by a central tower, 125 feet high, terminated by a statue of the Goddess of Justice, with sword and balance in hand which has since been removed. The tower was supported on a wide base and surrounded by colonnade with fluted columns and carved capitals.

Originally sheet metal details manufactured by W.J. Burt and Company of Fort Worth figured prominently in the design. Most have been removed. The roof was of stamped tin fabricated to resemble slate. Around each of the porticos was a balustrade of zinc. Cornices, handrails, balustrades, shell ornaments at the apex of the roof, and window pediments were all fabricated of galvanized iron and spun zinc.

The courthouse plan afforded twenty two offices and the district and county courtrooms. Also provided were five fireproof vaults in which county and district records were kept. Corridor and portico floors were of marble. Naturally finished wood was used throughout. The courtroom was elegantly finished with a paneled ceiling supported by fluted pilasters with panelled pedestals and carved capitals and bases. In 1891, the county clerk’s office was made fireproof and extensive remodeling and “modernization” were completed in 1950.

Bell County, originally a portion of the Robertson Colony, was first settled in 1834. During the War of Independence from Mexico and the subsequent period of uncertainty the area was abandoned several times. In 1839 the ever-present danger of Indian raids was abated by a decisive victory in the Bird’s Creek Indian fight and the population of the county grew slowly until the time of its incorporation January 22, 1850.

Before the official creation of the county, public business was transacted at John Danley’s Blacksmith Shop, with an anvil as a council table. On December 14, 1850, county officials approved the construction of the first of three courthouses to be situated on the town square, laid out in the midst of 120 acre site donated by Matilda F. Connell Allen for the county seat. The first courthouse was a one-story frame building 16 feet by 18 feet built by contractor Thomas T. Havens, and completed in May 1851 at a cost of $199.00. Its construction was funded by sale of town lots.

The building soon proved inadequate; most county officials continued to transact public business from commercial structures.
On April 1, 1850, the Bell County Commissioners’ Court voted to build a new two-story courthouse of native limestone. The design submitted by architect William Bock called for a conventionally arranged structure having four uniform facades, intersecting main halls, and fireplaces on both floors. The agreement with contractor Simeon Bramlett further stipulated that the building be “forty five by fifty feet with a base of three feet; lower story twelve feet to the ceiling; upper story which is to be the courtroom and two clerks offices, 15 feet from floor to ceiling; and these with the cornice will give the buildings an elevation of about thirty three feet–it will be furnished handsomely throughout with seats for the audience without the bar of the courtroom rising from front to back. The walls are to be eighteen inches thick.”

The building was completed December 1, 1859 at a cost of $13,635. Like its predecessor, the building was evidently not well received and none of the commissioners who voted for funds for construction was reelected. On August 20, 1860, funds were appropriated to gravel the courthouse square.

By 1883 the existing courthouse had become structurally unsound. Several grand juries ordered it condemned and approval was given for the construction of the present courthouse. Architects J.N. Preston and Sons, noted later for their design of the Driskill Hotel in Austin, submitted drawings. Contractor Ben D. Lee of Belton entered a low bid of $64,965 and construction proceeded with the laying of the corner-stone on June 24, 1884. The building was accepted by the county May 30, 1885. The finished structure with its classical porticos and one hundred and twenty-five-foot tower surmounted by a statue of the Goddess of Justice must have been an impressive sight. The Fort Worth Daily Gazette of May l9, 1885 noted admiringly that, “Among the many new courthouses built in the state during the past three years…the Bell County Courthouse surpasses all in beauty of design and elegance of finish …”

Today the courthouse continues to serve its original function despite considerable alterations of the architectural fabric. 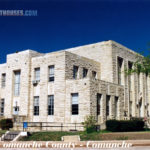 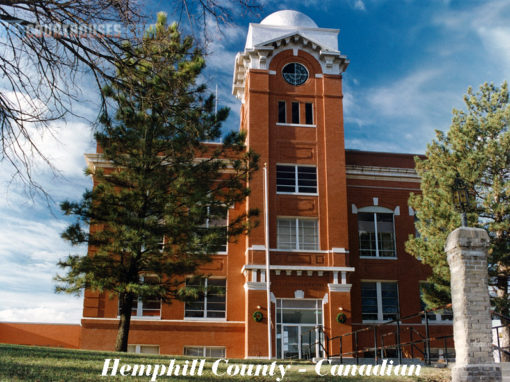