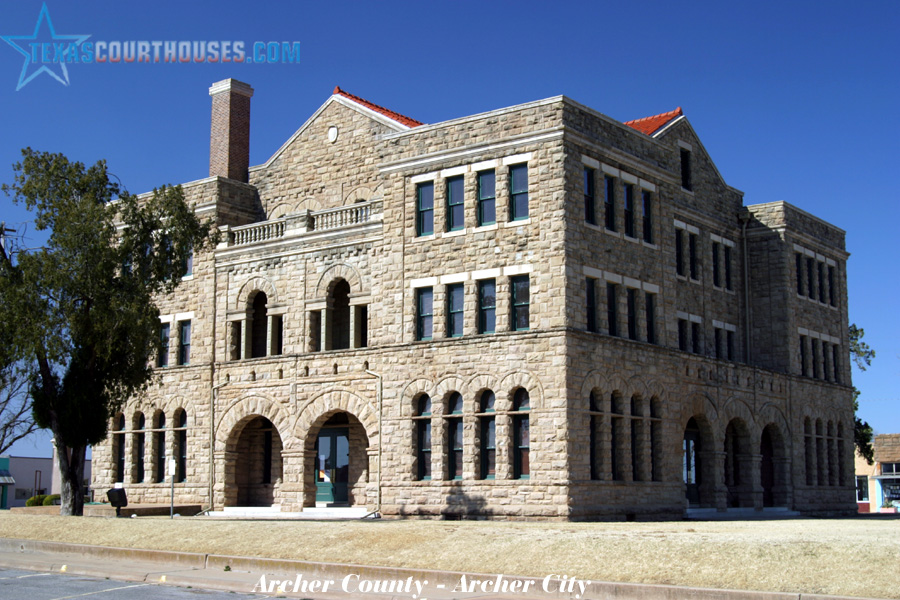 Constructed in 1891-1892, the Archer County Courthouse was located on the block set aside as the public square and it is the only structure on that block. The plans developed by architect A. N. Dawson were similar to those of most courthouses built during the late nineteenth century, but varied slightly in the arrangement of interior spaces. On the ground story, as was usual, two corridors furnishing access from all four sides and intersecting at right angles divided the floor into four quadrants. In these areas were located the tax office, tax assessor, county and district clerks, and commissioners’ court. On the second floor was the district courtroom, positioned with the bench adjacent to the south wall. On the north, separated by a corridor which also furnished access to the courtroom, was a row of offices.

The second floor was planned for good natural light and ventilation. Located adjacent to the east and west exterior walls, open stairways flanked the sides of the courtroom which was provided with windows opening into the stairwells. When these and the exterior stair windows were open the courtroom was cooled by the southwest breezes.

The exterior walls of the courthouse are of brown quarry-faced sandstone obtained from a quarry nearby. Openings in the corner pavilions were spanned by Roman arches with strong extrados. Triple arches mark the east and west entrances while double arches appear over the north and south entrances. On the second-story, centered in the south and north elevations, round-arched openings resemble Palladian motifs; surmounting these is a balustrade. Subtle design refinements include string courses, corner pilasters, and an ornamental cornice.

As originally constructed, each of the four corner pavilions was surmounted by a roof with a convex curvature, relieved by bull ‘s-eye windows. Rising from the center of the courthouse was a massive octagonal tower, with four clock faces, terminated with a cupola, all clad with sheet metal.

In 1925 and 1960, the courthouse was remodeled. The tower and roofs over the corner pavilions were removed in the early alterations. At the same time, a third floor was added and some of the second story openings were modified by replacing the arches with lintels. However, the essential original character of the courthouse, on both the inside and outside, is still quite apparent. Included in the original interior furnishings are the vaults, vault doors and stairs.

Located a block north of the courthouse, the Archer County Jail was erected in 1910, replacing a wooden jail constructed in 1886. It contains three floors with the sheriff’s quarters occupying the ground floor. On the second floor were numerous cells grouped into blocks which allowed the segregation of prisoners. On the third floor were additional cells and a patented installation with a steel trap door for execution of the death penalty by hanging. Communication between all levels was via steel stairs.

The construction of the jail was typical of the period. Walls were brown sandstone and the floors were comprised of steel I beams supporting corrugated iron arches, over which was placed concrete.

In 1974 the jail was abandoned. During the period of its original use 8,052 prisoners had occupied the cells.
In 1975 the county, for a small sum, sold the jail to the American Legion Post No. 198 and the Archer County Historical Commission. A deed restriction requires that the building be used only for a museum.

Although the design of the Archer County Jail is straight forward, string courses and cornice ornamentation are noteworthy exterior design features. A tower accents the southwest corner and a porch supported by stone columns with rudimentary capitals emphasizes the south entrance. The jail well represents the stage of development that detention facilities had reached by the turn of the century. Although now a museum the interior remains virtually unchanged; all the cells and installations in the sheriff’s quarters are extant.

The district around the public square still retains much of its nineteenth-century character, with commercial buildings facing the courthouse on all sides. This area formed the setting for the filming of much of the movie, “The Last Picture Show.”
Both the courthouse and the jail possess county architectural significance. Representative of determined efforts to have law and governmental organization on a lonely frontier, at the turn of the century they were remarkable achievements in West Texas. Then, as now, they were the focal points of the community and were the strongest architectural expressions to be found in Archer County. The courthouse was designed by one of the most active and talented nineteenth-century architects in West Texas, A. N. Dawson. In addition, the jail is noteworthy for the structural technology represented in construction incorporating steel and concrete.

The design of the courthouse is the product of an architectural competition. On March 10, 1891, the Commissioners Court of Archer County ordered the publication of invitations to architects to submit plans for a new courthouse to cost not less than $25,000 nor more than $35,000. On April 16, 1891, after having examined twenty- five sets of plans and specifications, A.N. Dawson of Fort Worth, Texas, was awarded the commission to develop detailed plans and specifications. Two months later the contract between the county and the contractors, J. S. DeWees and Jacob Rath, of Throckmorton, Texas, was signed. The contract amount was $32,500.

The Archer County Courthouse is a good example of style incorporating Romanesque Revival design features. Ashlar masonry and Roman arches all contribute to the visual strength of the style of this temple of justice. 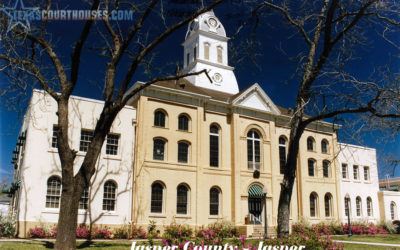