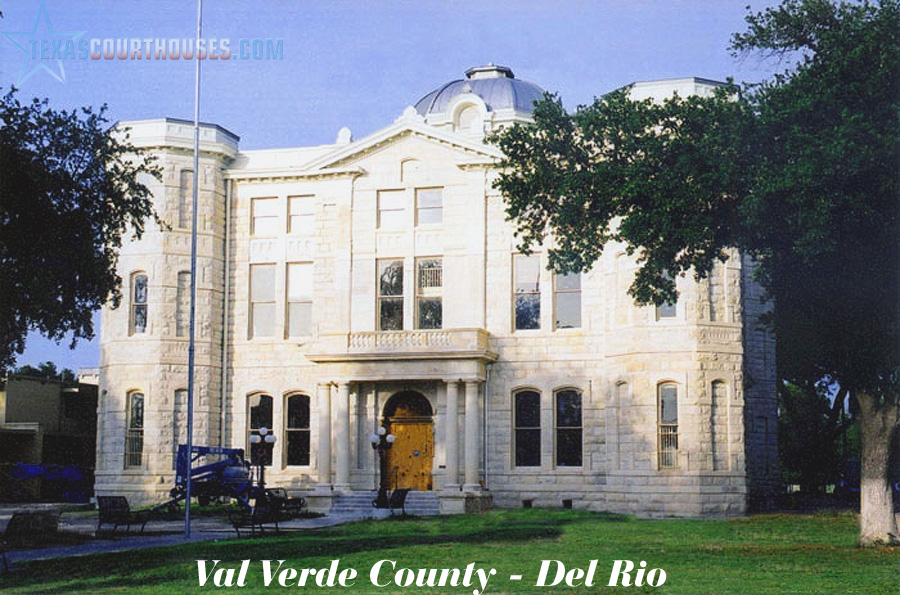 Built in 1887, the Val Verde County Courthouse is a fine work of masonry with Classical details. Entrances on each of the sides were emphasized by triangular pediments with modillions and dentils. Above these features, in Second Empire style, were Mansardic roofs with convex curvatures covered with sheet metal and ornamental wrought iron railings, all of which have been removed. On one facade statues of the Goddess of Justice and Goddess of Liberty were positioned on pedestals rising from the sides of the pediment. Rising from the center of the temple of justice was a Mansardic roof with decorative ironwork and bull’s eye windows containing lone star motifs (stars); while the circular features remain, the square Mansardic roof has been replaced by an octagonal dome with a low rise. At each corner, octagonal towers surmounted by steeply pitched roofs with finials at the apexes added picturesque charm to the building–the roofs, however, have been removed.

The tan colored limestone masonry is also distinctive. Walls were of pitch-faced ashlar are handsomely articulated by a cut stone water table and cut stone stringcourse. Roman arches of cut stone with pronounced keystones and imposts spanned the center openings while Stilted arches of cut stone enhanced the wall and tower openings. Paired pilasters with geometric decorative features and broken entablatures further enhance the entrances; above these, single pilasters provided visual support for the pediments.* (On the west, south and north facades a one-story, one-bay portico shelters the central entrance. At each end of the porticoes, coupled columns support a classical entablature crowned by a balustrade. The balustrade has been removed on the north portico. On the east side the portico was removed when the paved parking extended to the building.) According to local historians, the stonework was done by Indian masons.

As has often happened in Texas courthouses, some of the openings have been changed but sympathetic alteration has preserved the nineteenth-century character. Early views show that openings on the alternating sides of the towers were filled with panels of stone; modified openings continued this pattern. In 1915 a third floor was added within the original envelope requiring modification of the upper windows. When the upper floor openings were modified to accommodate this change, the new spandrels between the windows incorporated ornamental features reminiscent of those removed from the tower cornices. Although three entrances have been modified, the west entrance remains in original condition.

About seventy feet square, the floor plan is similar to numerous other nineteenth-century courthouses. On the ground level, corridors divide the building into four quadrant’s containing offices. The district courtroom was located on the second floor. Today the county and district courtrooms and offices the county clerk, district clerk, county auditor and treasurer’s office are still in the courthouse. Built in cat 1885 the old jail predated the present courthouse.

The Val Verde County Courthouse and Jail have architectural and historical significance. Although remodeled, the courthouse still retains much of its original fine workmanship and many handsome details. Moreover, it is the only courthouse the present county seat has ever had. This temple, along with the jail, have been the center of county governmental activities for about ninety years.

Organized in 1885, Val Verde (Spanish for green valley) was named after the Civil War battle of Val Verde. The county is located next to the Rio Grande in southwest Texas and covers a large area of over 3,000 miles–sixth in Texas in area–although in 1973 the county population was less than 30,000. This large area supports numerous sheep, goat and cattle ranches.

Forming a gateway to Mexico, Del Rio (originally San Felipe del Rio) was established near the Rio Grande and became a gateway to Mexico. The population increased slowly, however, and at the time the present courthouse was built, the community contained less than 2,000 people.

As was often the case, the railroad had considerable impact on the destiny of Val Verde county. In 1881 the Southern Pacific Railroad reached Del Rio; four years later the county seat was moved from Bracketville, which was not served by the railroad. In May, 1885, commissioners rented a commercial building on Perry Street for county offices. Shortly thereafter they directed their energies toward the construction of a new courthouse.

The architectural firm of Larmour and Watson of Austin, Texas, was commissioned to design the new edifice–Jacob Larmour and A.O. Watson were prominent and talented architects who also designed courthouses for several other counties, including Comanche County and Milam County. Subsequently the firm of Hood and McLeod were contracted to build the courthouse for $32,500.

In 1890 the Val Verde temple received national attention when a drawing of it was published in Leslie’s Illustrated Newspaper. This building along with the old ail are among the best examples of extant nineteenth-century architecture in the region surrounding Del Rio and definitely warrants preservation and continuing use. It was located on the northeast corner of the public square and evidently housed courthouse functions before the present temple of justice was completed. Two stories in height, the walls were of ashlar limestone.

In 1914 a three-story addition was made to the jail. Both were straightforward in design and with stonework characterized by fine workmanship.

In 1956 a new building housing the jail and sheriff’s offices were erected west of the old jail. Upon completion of this modern building the old building was remodeled into offices for the tax assessor, tax collector, and justice of the peace. 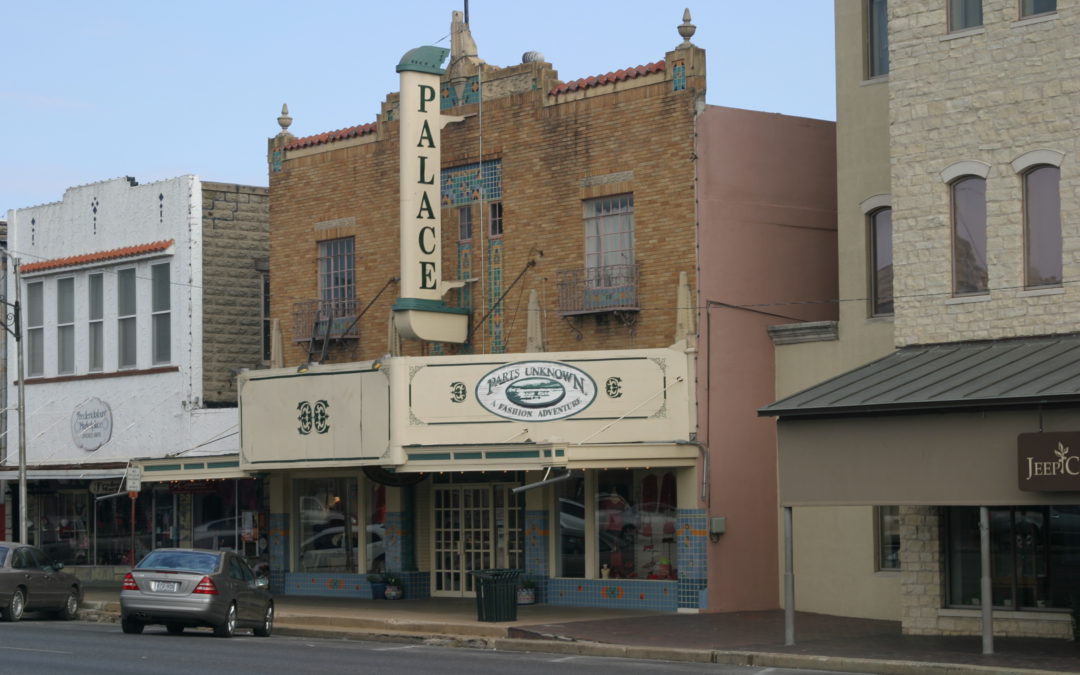