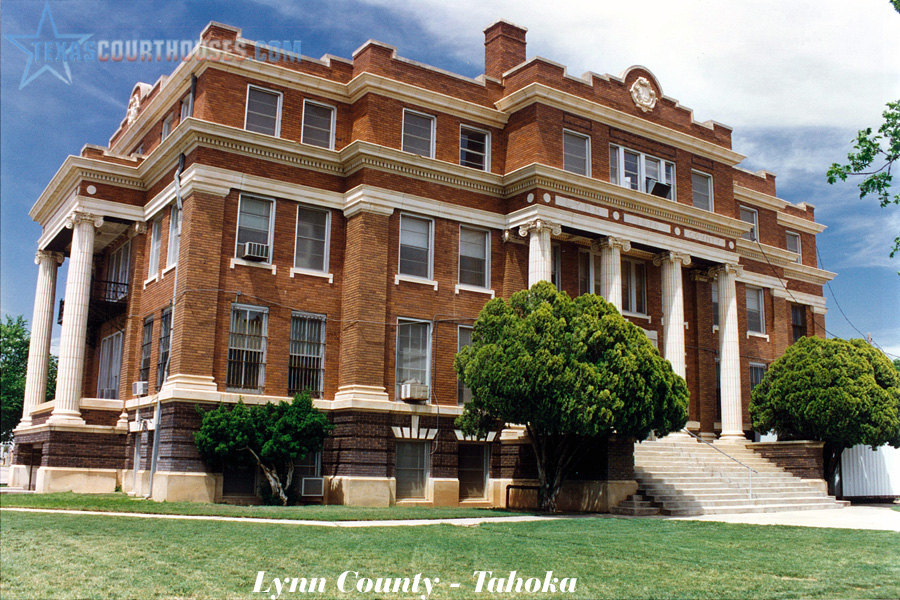 The Lynn County Courthouse, built in 1916, is an outstanding example of the type of public architecture that appeared on the South Plains during the region’s formative years. The three-story reinforced concrete structure was built to serve the county as both courthouse and jail. The red brick veneered building is the centerpiece of the small city of Tahoka because of its location on the courthouse square, its large size, and its Neo-Classical style.

Architect W.M. Rice submitted the final drawings for the Lynn County Courthouse to the county’s Commissioner’s Court in December 1915. The structure was to be a “three story building with a basement, the basement being the modern above ground style. The plan was replete with office rooms, vaults…with a magnificent courtroom.” It was to serve as county offices, courts, and jail. Construction commenced in 1916, and the new courthouse opened in December 1916. The building, which was considered a very modern and up-to-date public facility when it was first occupied, has changed very little in the 66 years since its construction.

The Neo-Classical style building’s dark red brick facade is applied over reinforced concrete. Light colored stone detailing provides contrast with the brick. The building is shaped symmetrically with identical facades opposite one another.

The courthouse rises from a raised basement with a concrete sill and brick walls which create a rusticated banded effect. A stone string course forms continuous sills for the first floor windows and divides the middle portion of the building from the basement. The windows in the basement have stone flat arches with keystones, and are the only windows with any ornamentation.

The middle section of the building features the four colossal porticos with Ionic columns. The north and south porticos are most imposing. They are obviously intended to be the main entrances to the building, as a wide flight of concrete steps leads up to the first floor doors, which are guarded by four Ionic columns. The east and west facades are slightly less ornamented, with only two columns and stairs leading down into the basement level. Iron balconies project from the second floor on these facades. The fluted stone Ionic columns found on each facade have an ornate capital with enriched volutes and egg and dart ornamentation. The columns support projecting porticos which have both egg and dart and dentil molding on the inside ceiling. The building is surrounded by an Ionic entablature consisting of a stone architrave with multiple fascias, brick frieze with stone sign panels and paterae, dentil molding and a projecting stone cornice. This entablature separates the middle and upper portions of the building. Pilaster strips with stone bases and capitals mark the four porticos and each corner of the structure from the first floor sill to the second floor entablature.

Above the cornice is the attic story, which extends to the edge of the portico on the north and south facades. The east and west porticos are flat roofed with a crenelated parapet. The attic story is topped with a stone cornice and crenelated parapet. All parapets have stone caps. Near the top of each facade is an ornate stone medallion centered with the letter “L” for Lynn County.

The windows on all floors were originally 1/1 double hung wooden units. Each was set in a simple surround with stone sill and no lintel except on the slightly ornamented basement windows. The original doors, which are still in use on the east and west, facades, were wooden with threequarter beveled glass panels. They were surrounded with sidelights and transom.

The courthouse exterior has changed little since it was put into service in 1916. In the early 1970’s, the original wooden windows were replaced with 2/2 aluminum windows. These metal units are of a different color than the original windows. However, they are of the same size and shape as the originals, and no structural changes were made to the building in their alteration. In 1976, the entrance doors on the north and south facades were replaced with modern aluminum and plate glass doors.

The interior of the courthouse reflects the exterior shape of the building. The hallways on the first floor form a cross from each of the four entrances. The first floor originally housed county offices and a small courtroom, which has been converted to the county tax office. The basement is still used as the mechanical and storage area of the courthouse, and houses the original steam heating system, which is still in use. The first and second floors have ceramic tile floors and plaster walls with marble wainscoting. The second floor accommodates judicial offices, jury room, and the main courtroom. This level has plaster walls and wooden floors. The main courtroom has been modernized with a dropped ceiling screening the third floor balcony. However, the main features of the courtroom remain intact above and below this ceiling. A marble staircase leads from the second to the third floor, which was intended for use as jury dormitory and jail. This floor is essentially original, as the jail was moved to a separate building on the square in the 1960’s and juries were not sequestered in the courthouse after women gained the right to serve. The floor is completely closed off and unused.

The courthouse is located on an irregularly shaped piece of land in the center of Tahoka. The courthouse square, which was the original town square, was originally 300 by 350 feet. It is bounded by Avenue J on the west, South Second on the south, Avenue H on the east, and South First on the north. Main Street dead ends in front of the north facade of the courthouse, causing it to be perceived as the main entrance. When Highway 9, later old U.S. 87, was extended through Tahoka in the early 1930’s, Main Street was extended across the northwest corner of the square to join Avenue J. This provided a direct route through town that was the principal north-south route thorough the Plains until U.S. 87 was realigned in the 1960’s.

This location is the legal center of the Original Town of Tahoka, and has neither block nor lot numbers. The lots which border the courthouse square are clearly designed as commercial lots, as they are only deep enough for one building. All buildings on these lots are oriented toward Main Street or the Courthouse, which because of its location, size and ornamentation is the focal point of the town.

A two-story brick jail was constructed in the 1960’s near the southeast corner of the courthouse square.

In 1903, the residents of Lynn County voted to organize a county government Tahoka became the county seat, and a square, two story wood frame courthouse was built on the town square. By 1916, Tahoka’s substantial growth convinced the townspeople to incorporate the twelve year old city. At the same time, county residents decided the county needed a larger and more permanent courthouse and an adequate jail facility. In July 1915, a bond election was held to authorize $100,000 in county bonds to build a new county complex.

Even before the bond election was held, Lynn County Commissioners talked to interested architects. After the bonds were approved, W. M. Rice, of Amarillo, was selected as architect and A. Z. Rodgers, of Henrietta, was chosen as contractor. Rice was later the contractor for the 1921 Freestone County Courthouse, at Fairfield, which is almost identical to the Lynn County Courthouse. However the design of the Freestone Courthouse is attributed to W.R. Kautman of Amarillo. Rice was also the architect for the 1916 W. A. Bacon house in Lubbock. Rice is probably responsible for a number of buildings in the Panhandle and South Plains region, though no systematic study of his work has been undertaken.

In December 1915, the final plans for the building were approved. Construction began in May 1916. In December 1916 the completed courthouse opened for business. The new structure contained all the modern conveniences of the day, including electric lights, water closets, steam heat and a septic tank. 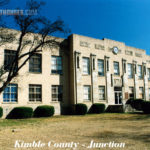 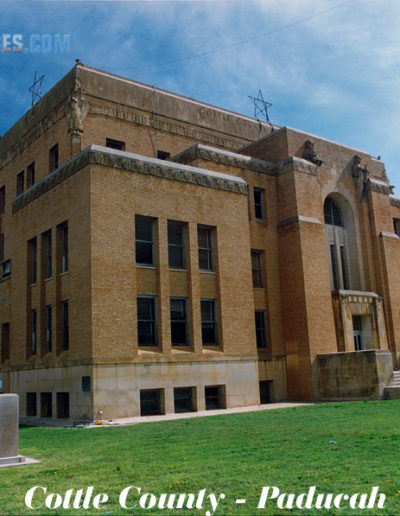