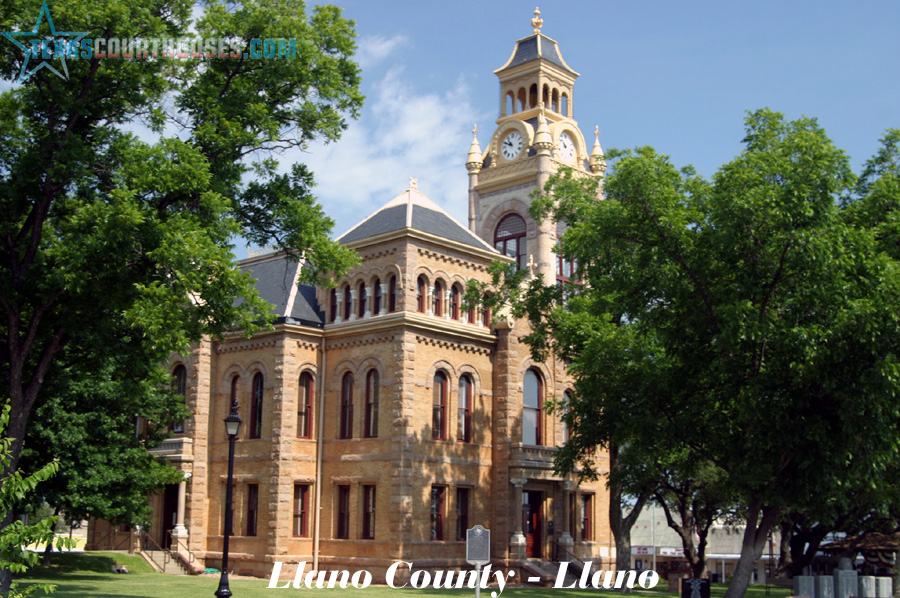 The Llano County Courthouse is a fine work of masonry on a traditional plan, designed by the firm of Jacob Larmour and A. O. Watson. The ground floor is divided into four quadrants containing offices by corridors passing through the center of the building in the north-south and east-west directions. The large two-story courtroom, along with four small rooms used by jurors, etc. occupies the second floor. On a third level, above the small second-story rooms are located additional offices.

The courthouse is in Romanesque Revival style and it retains virtually all is original exterior character. The composition consists of a large rectangular mass with three corner pavilions and a corner tower. The pavilion rooms are pyramidal while the roof over the main section (courtroom) is in the form of a truncated pyramid.

The north and south facades are five-part compositions and the east and west facades are three-part compositions, all with identical entrances emphasized by projecting features. At each entrance granite columns with marble capitals and bases flank the doorways and support an entablature incorporating a frieze decorated with a saw toothed pattern. Above this appears a window spanned by a Roman arch with a pronounced archival, flanked by quoins of quarry-faced granite. This central compositional unit is surmounted by gable with a bull’s eye window and a decorative coping. Double doors provide access the interiors.

The patterns of window openings contribute to the effectiveness of the architectural statement. On the first and second stories, openings are paired in each compositional component. On the third story, five openings appear in each facade of the pavilions.

The courthouse massing with a tower located on a corner rather than rising from the center is unusual in Texas and apparently had its origins in circumstances of site planning and in changes requested by the county commissioners during the course of planning. Evidently because the public square slopes downward appreciably to the northwest, it originally had been specified that the edifice be located on the southwest corner of the square. As a result of this requirement and the dictates of good composition, the architects placed the tower in an offset position on the southwest corner with entrances only on the south and west. Later the commissioners ordered the location moved to the center of the square and porticoes with designs matching those on the south and west were added to the north and east facades. Then the tower was moved to the northeast corner– the location of the cornerstone.

On the exterior walls of bricks are accented with stone details. Granite with tan color was use throughout for both structural and decorative work. On the ground floor granite lintels span the door and window openings. Roman arches with voussoirs of granite with pronounced archivolts span the second-story window openings. At the third story of the pavilions polished granite columns with marble capitals and bases support arcades with granite arches. Granite was also used for the base of the building as well as for the quoining which has tooled corner margins. In addition granite was employed for a wide stringcourse at the second floor level and narrow courses girdling the structure at the window sill levels on both the first and second stories. This material was also used for the exterior steps. Rising above the stone base, buff-colored bricks were used to finish the broad surfaces of the walls. These are terminated by a granite corbel table and a metal cornice.

Conforming to the main masses of the building, the tower was built of bricks with granite trim. Arches of granite span the wide window openings. This material also was used for the finials. The storied sections of the tower, the lower one of which displays clocks, were finished with sheet metal components with stamped shingle patterns.

The interior finishes were functional. Walls were plastered throughout and wainscots of wood capped by heavy moldings appear in the circulation areas and in the courtroom. While the hall wainscots and wooden trim have been painted, the wood finishes throughout the courtroom retain their original natural finish. Acoustical tile with recessed light fixtures recently has been installed in the courtroom.

Stairways with ornamental newels and balusters provide prominent ornamental features for the interior halls. While the railings, balusters and newels are wood, the treads of the stairs are iron, manufactured by F. Heierman and Bros., Austin. The Llano County Jail is a fine Richardsonian Romanesque building with typical interior arrangements. On the ground floor are the living accommodations for the sheriff and his family. The cell blocks were situated in the second and third stories.

The form of the building is cubical with a gabled pavilion projecting from both the east and west elevations. On the west this feature accents the main entrance which is spanned by a broad arch; on the east is contains a service entrance. All this is surmounted by a masonry tower with rectangular openings which provided for ventilation and by high stone chimneys rising from the north and south ends. The main mass and the tower are covered with hipped roofs of standing-seam sheet metal and the latter is decorated with cylindrical finials. Cornices with delicate brackets terminate the edge of the roof.

The masonry work of the jail is outstanding. Walls are constructed with quarry-faced ashlar granite. These are accented by narrow stringcourses located at the levels of the window sills, at the crowns of the first-story segmental arches, at the impost level of the third-story Roman arches, and at a level slightly below the eaves. Stringcourses also enhance the chimneys and tower.

The Llano County Courthouse and Jail have both architectural and political significance. They are fine works in Romanesque Revival design–the former in brick, the latter in granite–and they have served the needs of county government for three quarters of a century. Moreover, the courthouse has been the center of numerous activities and celebrations.

Located near the geographical center of the state, Llano County was created in 1856. The town of Llano, the county seat, also was established in the 1850’s adjacent to the Llano River. Among the early settlers were numerous German immigrants who were farmers and stock raisers.

Late in the nineteenth century, a boom occurred when some of the county’s mineral resources were exploited. Iron mining was developed and it was during-this period that the present courthouse and jail were built. Today the county has a population of about 8,000 people.

The present courthouse is the third in the county’s history. The first building was a plain one-story “box” located south of the public square. However, this building, along with many records, was destroyed by fire in 1880. Shortly thereafter the commissioners’ court issued orders to construct a new building. Meanwhile a temporary structure containing two rooms with a fireproof vault between was built to serve the needs of county government. One room was for the district and county clerks, the other for the sheriff and county attorney. J. K. Finely contracted the construction for $1550 according to the plans of C. S. Jones.

Early in 1884, the county judge was ordered to advertise for plans, specifications, and bids for the erection of a new permanent two-story courthouse to contain at least six offices and two fireproof vaults in the ground story and two jury rooms and a courtroom in the upper story. However, the original order was rescinded and plans were prepared by Alfred Giles of San Antonio. In form and style this building was virtually identical to Giles’ Renaissance Revival design for the Gillespie County Courthouse, Fredericksburg (1881-1882), which is now used as a library. Located in the center of the public square, the building was completed with the installation of copper lightening rods in 1885 and subsequently the temporary building was rented to the Christian Church for “religious purposes.

Although built with bricks, early in 1892 this fine courthouse also burned. Moreover, the brick vault survived and the county records were saved. Shortly thereafter the plans of the firm of Larmour and Watson of Austin were adopted for the present temple of justice, however the partnership evidently was severed during construction and only Watson’s name appears on the cornerstone. After selling the remains of the old courthouse, the firm of J. A. and G. H. Wilson of Sulphur Springs, Texas, was awarded the contract for a brick building trimmed with granite for $34,500. However, changes in the contract increased the amount to over $47,000 for the finished building.

The courthouse was finished late in 1893. Disputes that had occurred between the contractors and the county over labor and materials were settled and the builders received final payment on November 16, 1893. In subsequent years a clock was added to the tower and the square was surrounded with an iron fence, the latter of which has been removed.

Llano County also has had several jails. Among these was a calaboose erected in 1882 after the plans of J. S. Johnson. The contract for this jail was awarded to Martin, Byrnes and Johnson for about $7600. Located on the southeast corner of the public square, the building was completed that same year. As a result of a suit filed by the city against the county in the Court of Civil Appeals it was ordered that the jail be moved away from the public square, perhaps the town preferred that the undesirable elements be moved from the activity center of the community. In any event, before the turn of the century work was authorized for a jail.

Early in 1895, the commissioners’ court met to select and purchase a new site for the jail, to adopt plans, and to authorize advertisement for bids. Plans prepared by F. B. and W, S. Hull were accepted and the bid of the Pauly Jail Building and Manufacturing Company, St. Louis, Missouri, builders of innumerable jails throughout the West, was accepted. The contract for the gray granite building was for $11,500 and it was completed and accepted by the county within the year. 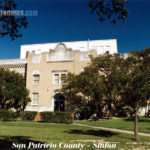 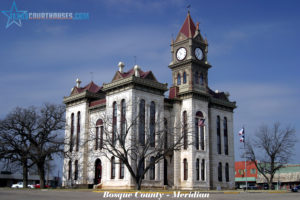