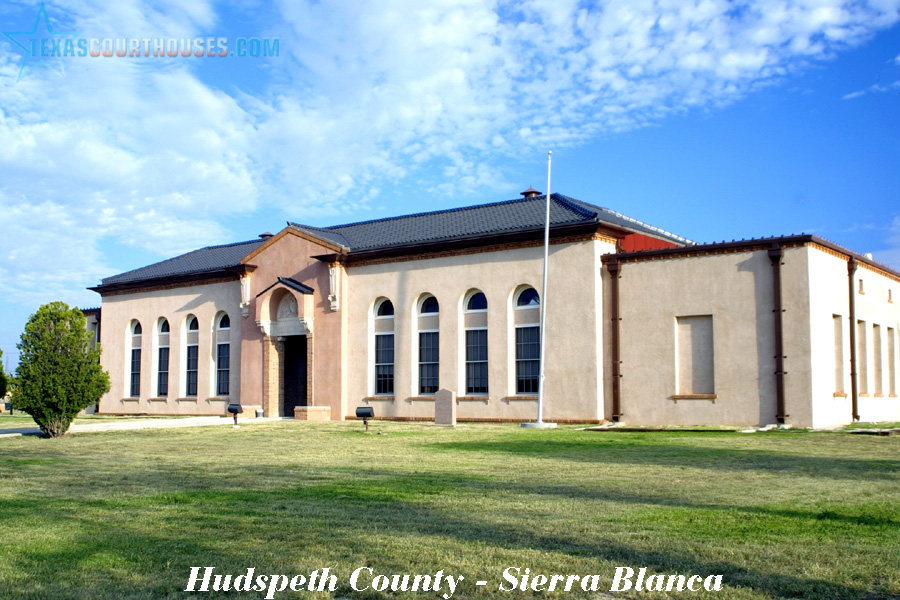 Building Completion Date: 1922
County Seat: Sierra Blanca
Present Status: Existing. Active
Architectural Firm: Beutell & Hardie (El Paso)
Architectural Style: Mediterranean Style (Spanish Eclectic)
Building Materials/Description: Two story adobe construction with 18-inch thick walls, designed in a Mediterranean style reminiscent of Renaissance Revival styles. Only adobe courthouse in the state. Flat roof with metal tile sections resembling clay tile for aesthetics. $35,000
National Register Narrative: The Hudspeth County Courthouse is a single-story adobe structure completed in 1922 to serve the newly created Hudspeth County. It is tee-shaped in plan, and contains about fourteen thousand square feet of floor space. There is a partial basement and a small mezzanine area. The eighteen inch thick exterior walls and most of the interior partitions are constructed of native adobe brick. The walls have an exterior of stucco with wire mesh attached to the adobe and an interior of plaster. The adobe bricks are 18″ x 24″ x 31/2″ and were made on the job site. Exterior grade beams supporting the walls are of concrete. The floor over the basement is of wood, and the remaining floor area is a concrete slab resting directly on the earth. The roof is supported by wood trusses resting on the load- bearing walls, and is covered by red Spanish tide. Ceiling heights are fifteen foot. The symmetrical facade is distinguished by its arcaded side bays flanking a central arched entranceway vestibule. There is little detail on the side bays, while the entrance has decorative ornamentation of the Classical Revival style. An arched hood on consoles with a cartouche under the arch marks the entrance. Consoles support the cornice to either side of the central parapet. A low hipped roof reinforces the Classical Revival detailing. Much of the present use of the courthouse follows the original plan. The District Court and County and District Clerk’s offices are in the original form and condition. The concrete vaults, public offices, and arrangement of outside doors and corridors is unchanged. The Assembly Room has been partitioned into smaller offices. The original County Courtroom is now in use as a public library. A small jail is in use in the northeast corner of the building at the top of the stairs leading from the original jury room which is now occupied by the Sheriff of Hudspeth County.
There is some structural distress in the interior adobe walls which intersect the outside front wall of the building. The front wall of the Courthouse has settled differentially about 11/2 inches in the most severe location. The break in the most severe case is about 3/4 inch.
Similar cracks are exposed in the same walls above the ceilings. The soil bearing capability is marginal with respect to the loads of the bearing walls. Excessive water in the soil due to irrigation has reduced this capability. The quality of the bricks is moderate (319 pounds/square inch), while it would not comply with present day building codes (about 350 pounds/square inch), its 55-year service indicates that satisfactory performance has been achieved with the exception of the present cracking. The general condition of the courthouse is good, and reflects adequate maintenance.
The Hudspeth County Courthouse is important in Texas as the only surviving adobe courthouse in the state that has been in continual use from the date of construction to the present time. The building is believed to be the largest adobe structure in the state, as well.
Adobe brick was formerly an important indigenous construction material in the southwestern United States. Its present day use, however, is limited to a few private structures. Almost certainly, no public buildings have been constructed of this material for many years, and Hudspeth County Courthouse may represent one of the best examples of adobe construction in public buildings which are still in everyday use.
The 18-inch wall thickness provides good thermal and acoustical insulation. High ceilings are typical of buildings designed for hot summer weather without modern air conditioning.
The architect, Bradford Hardie of El Paso, also designed a two-story adobe store and office building during the same period on Sierra Blanca’s main street. Hardie’s architectural efforts, however, were not limited to Sierra Blanca as he also designed several El Paso schools, homes, and apartment buildings. Later, Hardie was company architect for El Paso Natural Gas Company until his retirement in 1960. 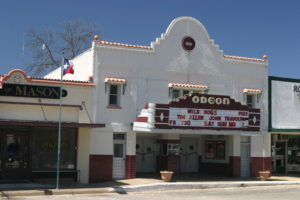 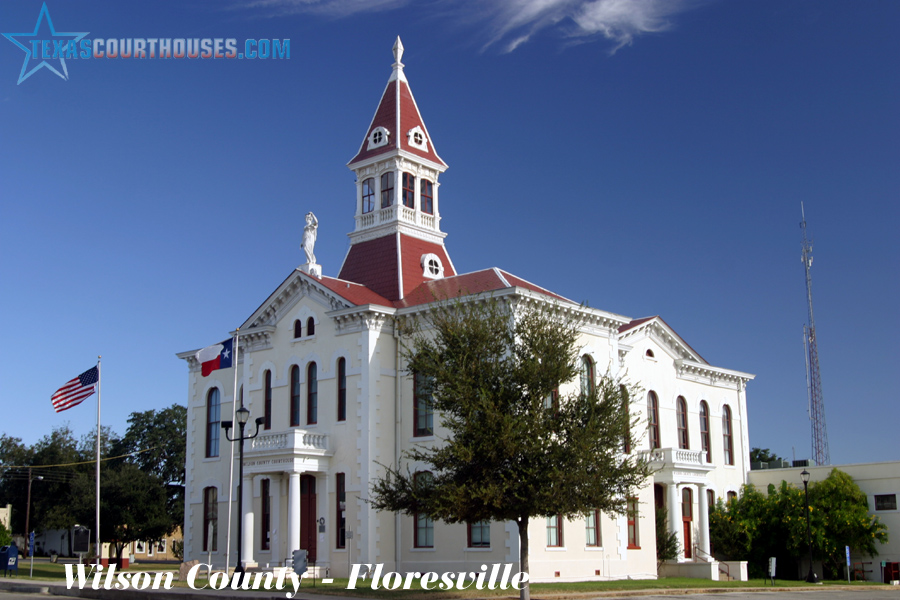