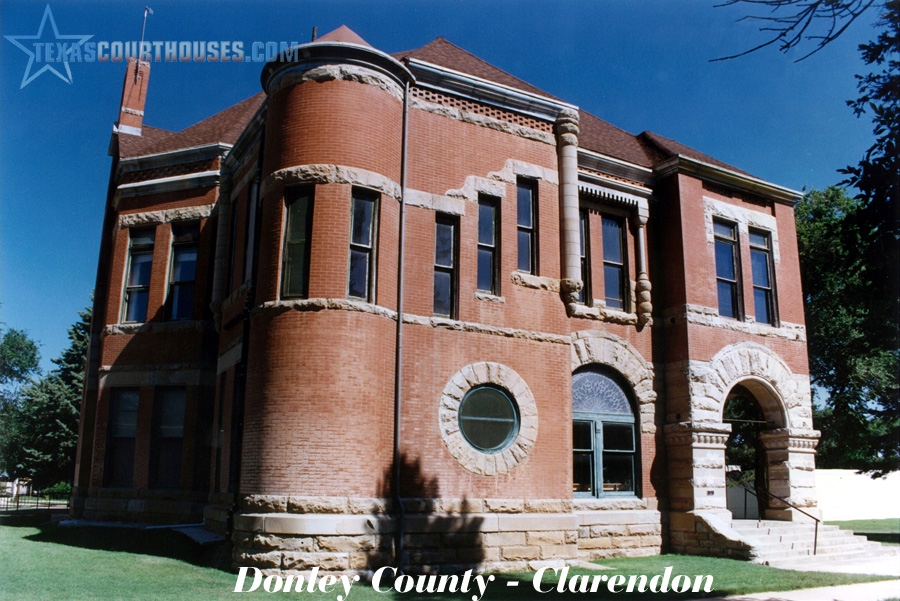 In Romanesque Revival style, the Donley County Courthouse is a fine picturesque work incorporating polychromatic masonry. Walls of the 1890 temple were St. Louis pressed brick placed upon a base of quarry-faced ashlar, the stones of which, according to one local historian, were taken from an earlier courthouse. Stone was also used for the arches, lintels, and decorative features. On the ground story cut stone was employed for the watertable, pinnacle shafts, and lintels. The arches of the tower base were comprised of large voussoirs with quarry faces, wide archivolts, cut intrados, and imposts decorated with geometrical ornamentation. These were supported by columns with alternating courses of smooth and textured stones. A billet terminating the wall was formed with inset bricks of contrasting colors to create patterns of recesses, which are emphasized by the play of light on the surface. A brick and stone fireplace on the south facade contributes to the picturesqueness of the asymmetrically composed massing.

Changes in the exterior of the building include the removal of the upper section of the tower, removal of dormers and the conical turret roof, all done in the 1930’s. In addition, some of the pinnacles have been remove and a cast iron cresting and metal finials have been taken off the roof ridges.

The courthouse plan is unusual in Texas but conforms to conventions followed by some other architects who worked in the Romanesque Revival style. One entrance is emphasized by the tower and porch. The turret contains a stairway; the windows placed in a stepped pattern also express change in level.

On the interior of the Donley County Courthouse many of the original finishes and furnishings are still extant. Walls were plastered and trimmed with stained woodwork, although the wood has now been painted. Hardwood floors are still intact, as are the ceilings which were finished with stamped sheet metal with intricate patterns. However, some ceilings are finished with plaster. Original furnishings include fireplaces, courtroom furniture, and bookcases in the judges’ chambers. Beautiful stained glass windows in arched openings and iron vault doors with Victorian decorative features are other original details that add to the interest of this courthouse.

The Donley County Jail is located on the northwest corner of the public square, near the courthouse. Built on stone footings, the walls of the jail were of Millsap and Vernon brick, completed in 1904. That same year, lightning rods, electric lights, and water and sewage systems were installed. In 1907 porches were added to the north and south sides. Although the utilities and other interior features have obviously been remodeled, the exterior still retains most of its original character.

The jail is a cubical building with stuccoed walls emphasized by stone stringcoures. Stone was also employed for lintels over the openings. The walls are terminated by a cornice formed with brick corbeling. On the northeast corner of the building the walls rise above the cornice and form a picturesque tower-like feature. This is decorated with details resembling battlements and machicolations–Medieval military architectural details. The use of these stylistic features in detention facilities symbolized strength and was common in Texas during the latter part of the century. Located near the top were small indentations resembling openings which added interest.

The porches were wooden. Square columns with simple capitals supported the roofs.

On the interior, as was common, the sheriff’s quarters were on the ground floor and cells were installed on the second.
The Donley County Courthouse and Jail have architectural and governmental significance. They are fine regional examples of nineteenth century design and have been the focal point of county functions for three-quarters of a century.
Located in the southeast section of the Panhandle, Donley County was created in 1876 and organized in 1882. It was named for Stockton P. Donley, an early lawyer and Texas Supreme Court Justice. Although containing an area of over 900 miles, in 1973 only about 4,000 people populated the county for which Clarendon serves as the county seat.

Clarendon was originally founded in 1878 and named for Clara Carhart, the wife of the town founder, Lewis Henry Carhart, a Methodist minister. However, shortly thereafter a new townsite was selected along the Fort Worth and Denver Railroad.

As was typical, provisions for county government were makeshift during the early years. In 1882 the house of J.S. Wright was leased for county offices and courtrooms. Subsequently, the building was repaired and furnishings were purchased. However some county offices were located in other buildings in Clarendon. The arrangements were, of course, inadequate and several years later commissioners prepared to build a new courthouse.

In 1887, after examining several sites, it was ordered that block 14 be selected as the site of a new building. Meanwhile S.T. Martindale, and Charles Goodnight, the latter of whom was a prominent West Texas rancher, were authorized to purchase material and oversee the erection of a temporary courthouse. Shortly after this building was completed, it was determined that it was “entirely insufficient for general use and that a new, more comfortable and commodious courthouse” was a public necessity. It was then ordered that a new brick temple of justice be erected at the earliest practicable date.

In 1890 another block was donated to the county and the county clerk was ordered to publish invitations for proposals for a new building in the Clarendon Traveler and the Dallas Morning News. After receiving the bids, the proposal of Troutman Brothers, contractors from Trinidad, Colorado, was accepted on plans provided by Bulger and Rapp, architects. Construction proceeded in a routine manner and was completed in 1891.

During the next several years the grounds were landscaped. In 1892 a board fence was built around the courthouse and in the following year trees were planted.

An annex has been added on the south side and the courthouse continues to serve its original functions. Embodying fine stylistic and decorative features and still retaining considerable original character, it is the finest surving example of nineteenth-century architecture in the area.

Similar to the provisions for county government, the first jail was improvised. In 1884, the purchase and repair of a powder house to be used as a jail was authorized. Subsequently a jail cell was purchased from the Pauly Jail Building Company.
In 1885 Charles Goodnight was appointed an agent to purchase materials for a new jail building and to oversee construction. However, work was delayed. Five years later officials intended to contract a new jail at the same time as the courthouse contract, but this effort also failed.

Finally in 1903, the Pauly Jail Building Company was asked to furnish plans and specifications for a new facility. After considering bids on these plans, J.A. White was awarded the contract for $8,980. Structural iron and steel, and the cells were purchased from Pauly Company. Early in 1904, the county accepted the completed jail and today it continues to serve its original function. 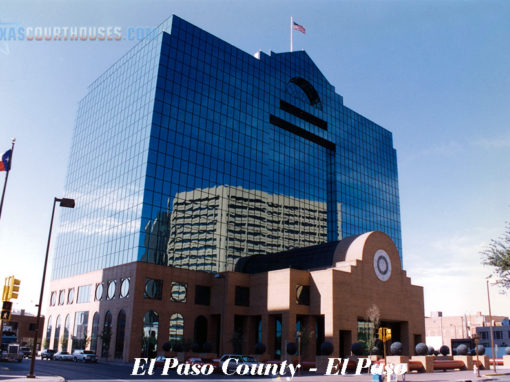 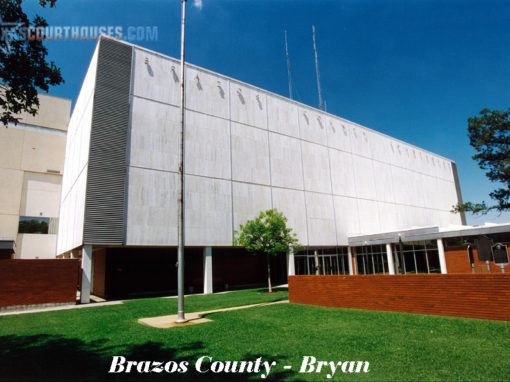