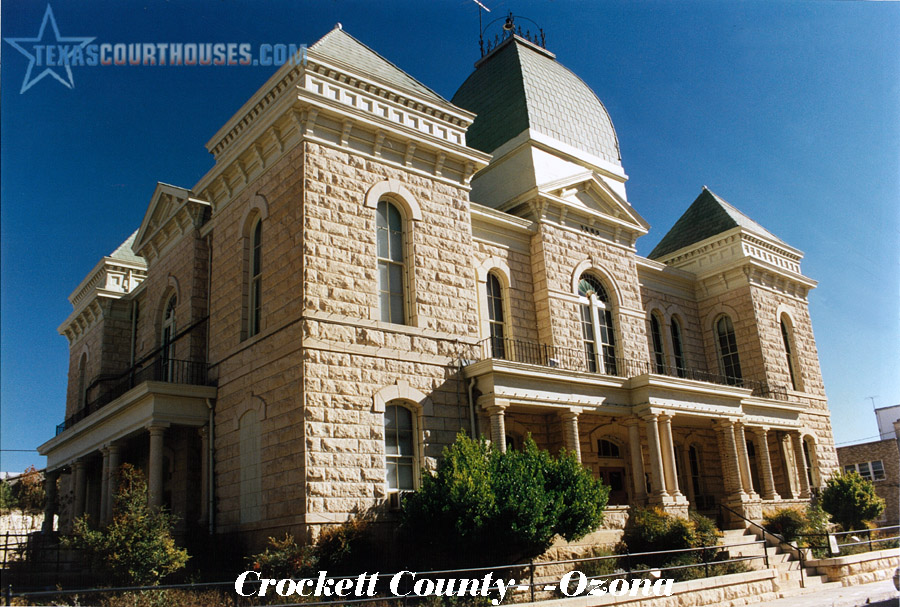 The Crockett County courthouse, located at 907 Avenue D, is a two-story limestone structure designed by architect Oscar Ruffini in the popular Second Empire Style. Built as the second courthouse in 1902, only eleven years after Crockett County was organized, the structure dominated the newly founded county seat of Ozona.

The courthouse is built of hand sawed native limestone laid in large, rough-hewn, ashlar blocks. The plan is bi- laterally symmetrical and basically square with four identical five-bay facades. The five-part composition includes a central projecting pavilion, framed by two recessed bays and terminating in projecting end pavilions. While the main roof is hipped, the central pavilions form a gabled pediment and the end pavilions are topped by a pyramidal cap.

A one-story classical gallery, slightly altered in later years, extends between the two end pavilions on each facade. Originally, a balustrade crowned the gallery creating a balcony, but this has been replaced by an iron railing. In addition, the central portion of the gallery at one time projected slight in proportion with the projecting central pavilion. The east or rear gallery and a portion of the south gallery have been enclosed.

The narrow, dressed stone bands located below each row of windows define the floor distinctions. The first floor has segmental arched windows and a double door with transom in the central pavilion. On the second floor the central bay contains two adjacent narrow 4 over 4 light windows crowned by a fan light and round arched lintel. Round arched windows flank each side of the central pavilions, but the west and east facades are distinguished from the side entrances by containing double windows in the recessed bays.

Brackets embellish the eaves of the pedimented gable and the terminal pavilions. The corner pavilions are further distinguished by the modillioned entablature which forms the base of the pyramidal roof.

From the front central slope of the hipped roof rises a convex Mansard roofed tower which rests on a rectilinear base. Originally, l’oiel d’ beaoufs were attached to each side of the truncated Mansard roof. An iron balustrade encircles the flat deck and supports an arc light added in 1909.

Because of the late settlement of Crockett County, the 1902 Second Empire courthouse is one of the earliest monu ments to the county’s establishment. Named in honor of the Alamo hero, Colonel David Crockett, the county is located on the Edwards plateau of southwest Texas and is bounded on the west by the Pecos River. The county was originally created from a large outlying district of Bexar County in 1875 from which five counties were later created. The size was decreased in 1885 when Crockett became a subsidiary of Val Verde County and in 1891 the present Crockett County was officially organized.
Although the earliest inhabitants included the Comanche, Apache, Kiowa, Mescalera and Lipan Indian tribes, the first settlements were the mid-nineteenth century supply depots and outposts for wagon trains. When gold was discovered in California, the western portion of the old Chihuahua trail, surveyed and established in 1848, became a major route to the west. In 1850 the government established stage stands to furnish fresh teams for the new mail runs through this area and in 1855 Fort Lancaster was erected to insure protection for the travelers. (See National Register Submission, Fort Lancaster, March 11, 1971). Following the Civil War Anglo-Americans began moving into this frontier region and took up unoccupied lands, but Indian depredations discouraged settlement until the united States government sent troops to the frontier posts. The Texas Legislature provided three battalions of rangers for protection of the area in September, 1966.

The 2,794 square miles of Crockett County is an area of rough stony land and shallow soil. Combined with the semi -arid climate, the land proved unsuitable for agriculture, but by the 1880’s settlers began buying land for cattle and sheep grazing. William Perry Hoover founded the first cattle ranch in 1881 and today 99% of the land is used for grazing.

The first town, Emerald, was founded in 1889 by representatives of the Gulf, Colorado and Santa Fe Railroad, who owned some land about seven miles east of present day Ozona. With visions of laying railroad tracts through the area, an immigration agent from Fort Worth was hired to encourage settlement and a church, schoolhouse and saloon were provided. Mr. E.M. Powell, a surveyor in West Texas also owned Land in the county. Upon learning of the county organization he drilled a well on his property and named the site Ozona. Anxious for the county seat to be founded there, he offered to donate land for a public school, public plaza, courthouse, jail, water works and recreation park.

Crockett county was organized on July 1, 1891 and a week later they voted to create the county seat at E.M. Powell’s site. The people of Emerald literally moved their settlement to the site of Ozona and became the county seat’s first citizens. A pioneer lawyer in Crockett County, Charles E. Davidson, was elected the first county judge and was instrumental in the town’s development. Having grown up on an Iowa farm, here received his education from the University of Iowa and then received a law degree in California. He practiced law in California, Austin, Texas, and in 1883 moved his practice to San Angelo, 85 miles from present day Ozona. When the citizens of Crockett County began organizing the county, Davidson, who owned cattle and some property there, was petitioned to run for county judge. First elected in 1891, he held the same office for 52 years and was largely responsible for the erection of the present courthouse in 1902.

The first courthouse was wood frame structure built in 1891 by the town carpenter Sam T. Smith. The building served the county until 1902 when the present stone courthouse and jail were built. Oscar Ruffini, a San Angelo architect was chosen to design the stone courthouse. Ruffini had earlier acted as the supervising architect for the first San Angelo courthouse in 1884, and designed the original stone courthouses of Concho, Mills, Sutton, and Sterling Counties. He had also designed numerous schools, banks, hotels and commercial buildings in West Texas. Born in Cleveland, Ohio, Ruffini followed his older brother, F. E. Ruffini, to Austin and joined him in architecture practice. In 1883 Oscar moved to San Angelo for health reasons and lived there until his death in 1957.

The county official had submitted a bond issue to the citizens for $30,000, which had been accepted in December, 1900. Mr. Ruffini’s plans were then accepted in February, 1901. Two native quarries, one on the Meyers estate and the other on the Couch estate, provided Ozona with the building stone. One of Judge Davidson’s requirements for the new courthouse was that it be available for social events. For a town of 1500 people in 1902, the courthouse housed not only the courtroom and county offices, but contained the largest space for a dance hall. During the first decades of the Twentieth century the two-story stone structure served as a community center for social events and weekly dances.

The Oscar Ruffini courthouse is the finest example of Victorian public architecture in the area. Although the county has outgrown the facilities of the old structure, the citizens of Ozona plan to restore the building for a museum and public library. 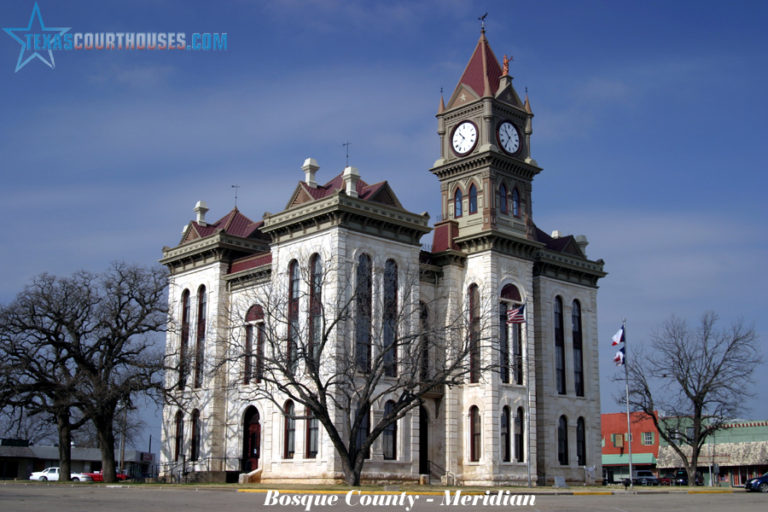 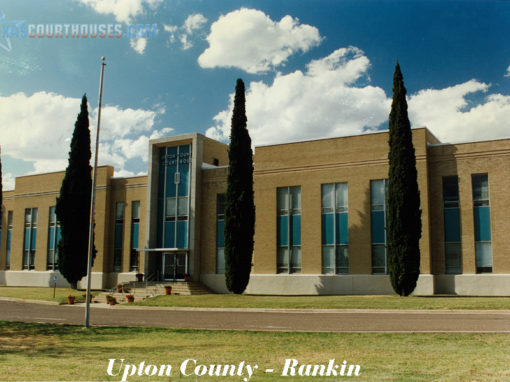