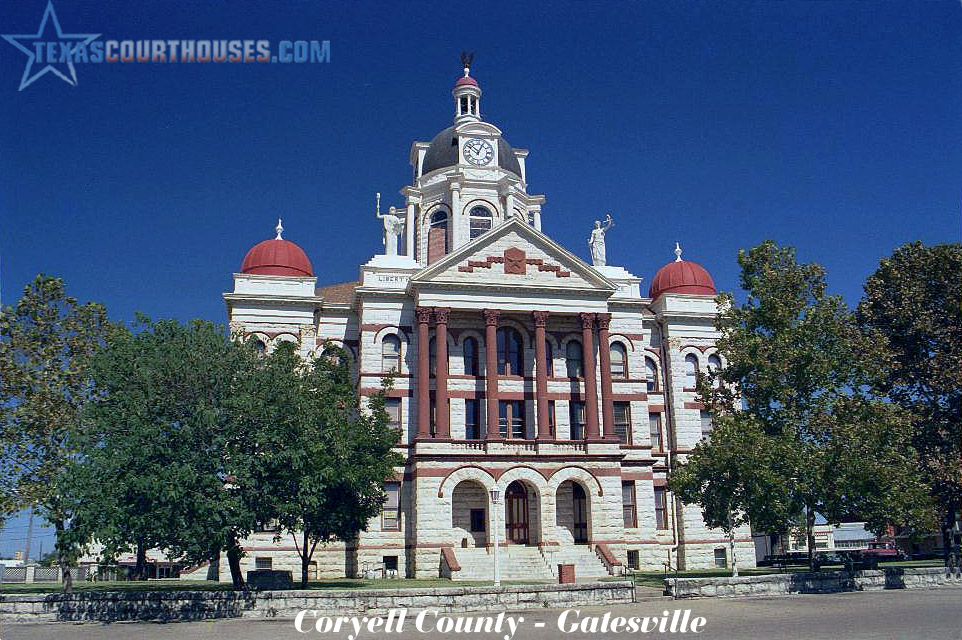 Noted for the design of a number of Central Texas courthouses such as those in Hood, Denton, and Hill counties, architect W.C. Dodson modified the traditional cross-axial plan to allow the erection of a central tower in the Coryell County Courthouse. By moving the district courtroom to a position along side the tower rather one centered under it, he was able to extend masonry support walls to the ground and support a heavy structure–as opposed to a light wooden work supported on trusses over the court space.

The Coryell Temple of justice also marks something of a departure from yet another convention of Texas courthouse architecture in which entrances in four relatively uniform facades give equal prominence to each of the commercial blocks surrounding the square. In spite of the presence of entrances in each facade the dominant architectural treatment of the south side suggests one major entrance. The north side has secondary dominance and the east and west entrances, identical in composition, have tertiary importance. In later years the main street shifted to the north side of the square and the north entrance became predominant. The south portico has paired corner columns while the north has single columns; also the openings flanking the central arch are smaller on the north.

Among the most remarkable features of the building is the composition of the interior spaces. Two central corridors passing through the building intersect on right angles under a rotund. Located in the corridor just inside the prominent south entrance, a wide stair leads to a wide second floor landing, thence onward to the center where the floor plan enlarges and encompasses the rotunda openings, providing it an excellent progression of spaces terminating at the spacious district courtroom.
The form of this courtroom is the basis for a unique composition of forms. Built in oval form at the request of the county commissioners it is strongly expressed on the northeast and northwest with curved forms. On the north side of the building, the district judge’s office and a circular stair are contained within separate towers located adjacent to a portico which is similar to but smaller than the south portico.

On the ground level, this oval form contains the county courtroom on the west side of a bisecting corridor, and sheriff’s office and office of the county clerk on the north side. Typical of many courthouses, spaces for the grand jury and district clerk were located on the second level. The third story–the level of the district courtroom balcony- contained rooms for jury’s and office space.

Much of Dodson’s work was Romanesque in character with elements of either The Second Empire or Classical style. The Coryell County Courthouse is of the latter type, firmly based in the round arches.

The Coryell County Courthouse has local historical importance and regional architectural significance. It has been the center of governmental activities since its completion and, continues to serve these functions. It was designed by a prominent Texas architect and has no counterpart in the state. Comprised of curved and rectangular forms, and incorporating a combination of Romanesque and Classical details, as well as polychromatic materials, the edifice is one of the most interesting and charming nineteenth-century courthouses in the Southwest.

Coryell County, named for James Coryell, an early explorer of the region, was organized in 1854. Gatesville, the county seat, grew up around Fort Gates, established in 1849 to protect settlers from marauding Indians. After the incorporation of the county, public business was for a time conducted from rented offices and commercial buildings. Land for a courthouse square was acquired and a one-story framed structure was constructed in 1865 on a corner presently occupied by a city filling station. In 1872, a two-story structure of native white limestone was erected on this property and served as a focus of county business for the next twenty five years. The second courthouse, built at a cost of $11,000 had four rooms defined by intersecting main halls on the first floor with jury and courtrooms above.

On May 15, 1897, architect W.C. Dodson was commissioned to draw plans and specifications for a third courthouse at a contract price of three and half percent of the total building cost. The only stipulations imposed on the architect were that the building have a cupola on top with a Seth Thomas Clock and a bell of not less than 800 pounds, and that the building be roofed in metal with the dome on the cupola in clad copper. In addition, there were to be dual statues of Liberty and Justice at the north and south entrances.

On October 2, 1897, a hollow cornerstone was laid with full Masonic ritual. The stone was placed on the northeast corner of the building; its orientation, was, in ceremonial usage, symbolic of light. It was positioned at the accompaniment of music and after suitable orations was sprinkled with corn, wine and oil, emblematic of plenty health and peace. It was blue-gray granite weighing 1,825 pounds. Among the inscriptions on its surface were the dates Anno Domini and the Masonic Anno Lucia. Inside was a box of articles representative of the character of the period. Included were a photo of the old courthouse, two boxes of medicine, a copy of the Dallas Morning News, an 1897 five- cent piece, a bottle of whiskey and a list of Women’s Christian Temperance Union officers along with a Columbian half dollar and Masonic Lodge Bible.

The courthouse was completed on July 18, 1898, at a cost of $73,649.69 by contractor Thomas Lovell. Constructed of native limestone and red sandstone, the blocks were cut to size at the quarry and hauled to the site by horse drawn wagons.
The courthouse today continues to serve its original function. 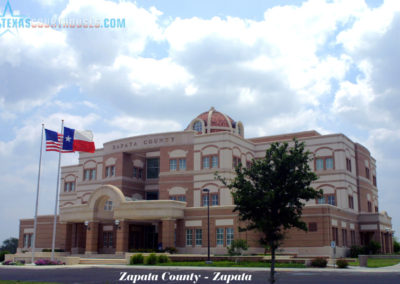 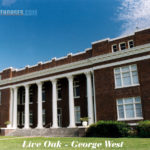