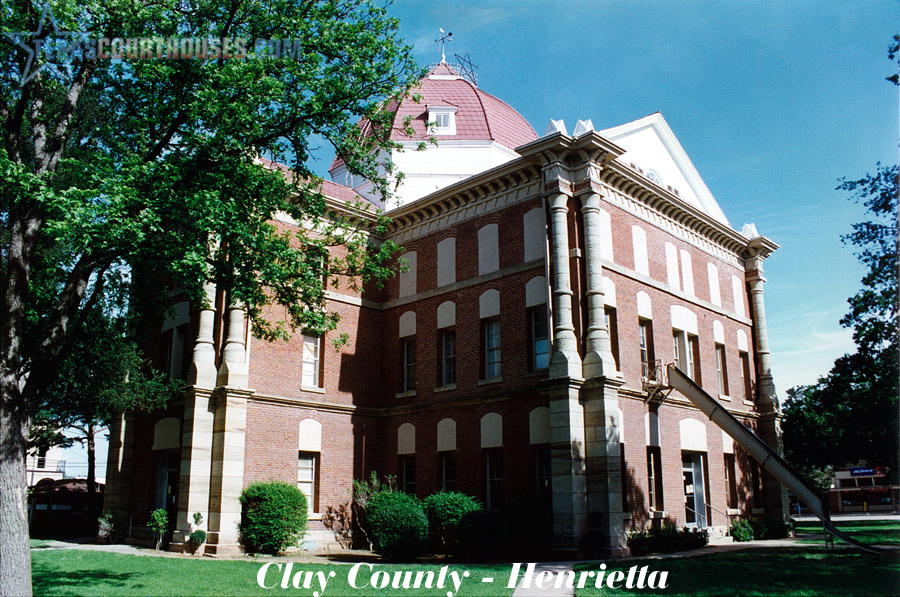 Building Completion Date: 1884
County Seat: Henrietta
Present Status: Existing. Active.
Architect: William H. Wilson
Architectural: Firm Wilson & Tozer
Architectural Style: Classical Revival with Italianate influences
General Contractor: Strain, Risley & Swinburn
Building Materials/Description: 3 story, brick. Designed by W. H. Wilson & Tozer, the Clay County Courthouse is Classical in form and detail with Italianate influences. It is designed in the form of a Greek cross, with narrow wings projecting to the north and south and wide wings projecting to the South. 1911: According to dates on the roof rafters, this is when the bell tower was removed and replaced with the dome and roof configuration extant today.

The plan of the Clay County Courthouse is in the form of a Greek cross with narrow arms projecting to the north and south and wide arms projecting to the east and west. Corridors extending through both arms of the cross provided access from all four sides of the building which was positioned in center of the public square. On the ground level, the wide arms of the cross contained offices and the narrow arms contained the stairways providing access to the courtroom which originally occupied most of the second floor.

The form and details of the courthouse are Classical. The most noteworthy features of the exterior are the sandstone columns on tall pedestals projecting from each of the eight corners, expressing the second floor as a piano mobile. The walls of locally-manufactured red brick are accented by sandstone stringcourses. During construction an iron cornice was substituted for the stone cornice that was originally specified. Originally the roof was hipped on a low pitch, creating a stronger horizontally than the new with four clock faces surmounted by metal details was replaced early in of frame construction. Late in the were installed–these of gable roof provides. A tall tower a cupola and finished with sheet the twentieth century by a low dome century, an iron fence and concrete course, have been removed and replaced. In 1891 a fireproof record room was added and in 1893 twenty four incandescent lights were installed (an early use in West Texas of artificial lighting).

On the interior the offices remain essentially in their original configuration. However wall surfaces have been refinished with pecan paneling and lower ceilings have been installed. In recent years, along with interior alterations, many window openings have been partially or wholly filled.

Typical of many of those in West Texas, the Clay County Jail was a two-story masonry work with stuccoed walls. Roman arches with emphasized imposts were employed on the front section, which was emphasized by an asymmetrically placed gable; elsewhere segmental arches were used. Wall decoration consists of stringcourses, an ornamental brick cornice and some relief on the Roman arches. Other decorative features include corner finials and a small cupola, the latter of which was also functional.

The Clay County Courthouse and Jail have architectural and governmental significance. The Courthouse is distinguished by its stone details and cross-shaped plan, which was relatively unusual in Texas. Both the courthouse and jail have been the focus of government and law enforcement activities for nearly a century. In addition, during the early years of its use, the Courthouse was the location of numerous social activities of the county.

Clay County was organized in 1857 but Indian raids later forced abandonment. In 1872 the county was reorganized and the following year the county commissioners ordered the construction of the first courthouse, a rectangular stone building.
Named, according to legend, for the wife of Henry Clay of Kentucky, Henrietta was originally laid out in 1860. After abandonment during Indian problems the town was reoccupied in 1865 but was once again vacated as a result of pressures from the Indians. It was finally occupied permanently in 1873 and it was incorporated in 1882, the year it became the permanent county seat. Located on the Fort Worth and Denver Railroad and the Missouri, Kansas, and Texas Railroad, it became a commercial center for the surrounding region.

Late in 1883 the commissioners’ court ordered T.J. Craig, County Judge, to advertise for plans and specifications for a new courthouse to be erected on the public square. After examing those submitted, the plans of W.H. Wilson of Dallas were accepted. Later, another architect, (first name unknown) Tozer, became associated with the project. On January 29, 1884, after consideration of the bids submitted, contractors D.W. Strain, Ward Risley and A. Swinburn of Fort Worth were selected to build the temple of justice for $34,800 and on June 24 the cornerstone was leveled by Henrietta Lodge No. 454, Ancient Free and Accepted Masons.

As occasionally was the case in the nineteenth century, various rooms in the courthouse served functions outside government. In 1884 the grand jury room was rented to the Knights of Honor for use as a lodge room. A room on the third floor was rented as a law office and in 1886 another room was rented to the Henrietta Silver Cornet Band for $4.00 per month. Later, however, orders were issued forbidding the use of the courthouse for balls and dances. Then, in 1905 the court issued an order forbidding the use of the courthouse for ice cream parties because “the continued waste of salt and salt water on floors have damaged to a considerable extent, as well as the sleepers under the floor. . .”

Today the courthouse continues to serve soley the functions of county government.

In 1874 a sixteen-foot-square jail was built with six inch wooden walls. Built of solid oak the plan consisted of a central hall with three cells on either side. This work is preserved in Henrietta.

However, this early calaboose obviously proved unsatisfactory. In less than three years after its acceptance in 1875, notices were published inviting contractors to submit proposals for the construction of a new sandstone jail. On August 12, 1878 the commissioners’ court ordered that the contract for the erection of a county jail be let to J.L. Thomas of Fort Worth. For $7,000 the contractor, who developed his own plans, was to build a jail with exterior walls of pitchfaced ashlar sandstone.
However, this jail was not built. Finally in 1890 the Pauley Jail Building and Manufacturing Company of Saint Louis was awarded a contract for the construction of a new jail for $24,000. The jail was completed and accepted that same year. 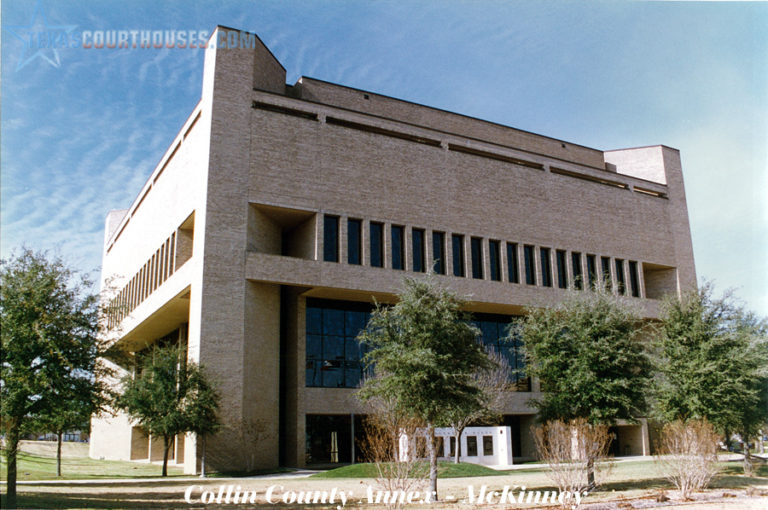 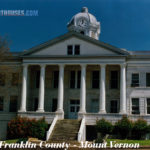