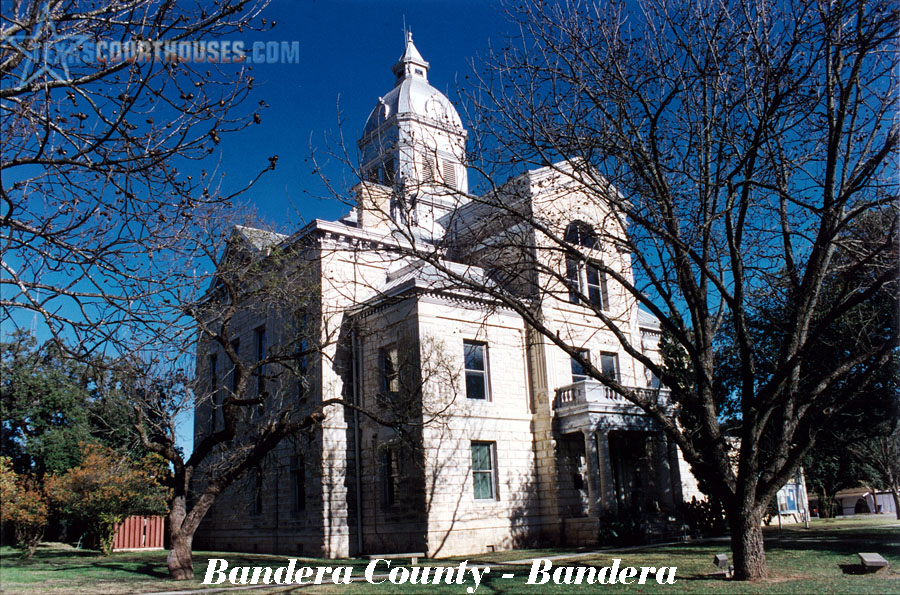 Building Completion Date: 1869
County Seat: Bandera
Present Status: Existing. Library.
Architect: Henry White
Building Materials/Description: Built in 1869, the two-story, coursed rubble limestone building was used as the Bandera County Courthouse from 1877 to 1891. The simple vernacular structure is covered by a gabled roof surmounted by a single end chimney. Abandoned as courthouse in 1892 upon completion of new courthouse on square. A hooded brick flue for a stove was added to the west elevation in the late 19th century. Interior remodeled in 1978-79 for use as county offices.

Building Completion Date: 1891
County Seat: Bandera
Present Status: Existing. Active.
Architect: Benjamin Franklin Trester
Architectural Style: Italianate and Renaissance Revival
General Contractor: Ed Branden & Sons
Building Materials/Description: Stone, 3-story. Cost to build: $19,914. Trester died (at age 40) during construction, total of $750 paid to architect (and his widow) for project. Abandoned as courthouse in 1892 upon completion of new courthouse on square. A hooded brick flue for a stove was added to the west elevation in the late 19th century. Interior remodeled in 1978-79 for use as county offices.

The three-story rusticated cut limestone courthouse built in 1890-91 with a central clock tower, is the focal point of the Bandera public square, and the dominating architectural feature of the town. The Second Renaissance Revival-style structure was built of locally quarried white limestone. The rusticated stone building is bonded in smooth- cut limestone at water table and belt course, lintels and fluted pilasters. Originally massed in an ABA rhythm on all four facades, a one-story stone office addition to the east facade in 1966 has disturbed the continuity of that facade. The north and south facades consist of a three-story central projecting pavilion flanked by two-story wings. The central portico is supported by paired classical columns and crowned by a balustraded balcony above at the second story level. The east and west facades, are less prominent but feature cut stone voussoirs at the central pavilion’s second level. The eaves are bracketed on the east and west pavilions, with a dentil cornice on the flanking two-story portions. The hipped and gabled roof and the domed cupola are covered with standing-seam metal. Four stone chimneys pierce the central pavilions of the east and west facades. Additional alterations to the structure consist of aluminum window replacement in 1966 and interior renovation. The building is generally in excellent condition, except for a need to strengthen the cupola at the present time. A one-story, stuccoed block building separated from the courthouse, but on the public square was built to the north (rear) of the courthouse in 1938.

Two blocks east of the courthouse stands the two-story vernacular coursed rubble limestone building used as the courthouse from 1877 to 1891. It was built in 1869. Local historians differ on the original use of the building, which is perched on a hill above the former location of an old cypress mill on the Medina River below and belonged to the same owner. It is believed to have been built as a residence by one source, and as a store on the ground floor with Masonic lodge meeting hall above by another. The very simple vernacular structure with gabled roof (originally covered by cypress shingles–now roofed with corrugated metal) and single end chimney has retained the original six-over-six sash windows in the upper floor of the east and west facades, but windows and doors have been replaced with newer models on the ground floor and second story south wall. A hooded brick flue for a stove was added to the west elevation, probably in the late 19th century.

Adjacent to the old courthouse, joined by a large parking lot, is the Old Bandera Jail. Built in 1881, the one- story cut stone structure with castellated parapet on the front (south) wall features elaborate cut stone hood molds over the four symmetrically placed iron-barred, four-over- four sash windows on the south facade, with a double door central entry with barred transom. The entrance is accentuated by the central raised portion of the parapet wall above inscribed with the building date. Further elaboration consists of the use of rusticated limestone quoins at the corners of this main facade, and a water table course surrounding the building. Two saw-and-file-proof cages were installed. The four-room jail has been maintained with minimal alterations over the years.

These three county buildings, varying in scale, design and construction date but all built of local materials, are evidence of the boom-town growth of post-civil war Bandera (and Texas as a whole) which stopped in this town and then dwindled in the 20th century. This growth can be traced from the county’s early use of temporary log structure to the purchase of the more permanent two-story 1869 vernacular structure overlooking the Medina River, to the subsequent sophistication of the adjacent one-story masonry jail designed by architect Alfred Giles in 1881 and finally, the elaborate though unusual local adaptation of Second Renaissance Revival style in the courthouse designed by B.F. Trester, Jr. in 1891. The three buildings have remained in continuous use in the community both in governmental and business functions and are important landmarks to the townspeople.

Bandera County, organized in 1856 in a ranching area, with its primary industry that of the manufacture of cypress shingles, used makeshift quarters for jail and courthouse functions until 1877, when the county purchased the two- story stone vernacular building overlooking the cypress mill which is now known as the old courthouse. Built for local entrepreneur and mill owner J.B. Davenport in 1869 by a builder named White, the building served as county courthouse until the present courthouse was built in 1891. Since that time it has been leased by the county for various commercial enterprises, and continues in use as office space.

The present courthouse was designed by a prolific San Antonio architect, B.F. Trester, Jr. In a two-year period, Trester also designed the Uvalde County Courthouse, a two- story stone school in Kerrville, Methodist Female Seminary in San Antonio, a two-story brick store in Beeville, and the Uvalde Opera House (N.R. 1978) before his death in March of 1891. Builders for the courthouse were Ed Braden and Sons, with Frankel and Hayden shown as supervising architects. Apparently a design for the courthouse was submitted by Alfred Giles and rejected. A one-story jail was built on the square behind the courthouse in 1938, and a one-story limestone office addition was built to the east in 1966 when the courthouse was remodeled and the windows were replaced. Even with these changes, the character and mass of the building are important to the scale of the tiny town (present population 941).

The elaborate old one-story jail was designed by renowned Texas architect Alfred Giles. Giles is known for his work in northern Mexico and Texas after his emigration from England to San Antonio in the last half of the 19th century. Some of the buildings he designed include the Old Gillespie County Courthouse (N.R. 1971), the Sullivan Stable and Carriage House in San Antonio (N.R. 1978) and the Schreiner Mansion in Kerrville (N.R. 1975).

Giles’ design for the jail was identical to the Bexar County Jail he built in 1877, except that the scale is smaller. Giles himself acted as supervising architect, with James A. Courtney acting as contractor. P. Pauly and Brothers of St. Louis, Missouri, constructed the two saw- and file-proof cages, as they had for Bexar County, for $2,855. After the new jail was built in 1938, this building served as a World War II veterans meeting hall, offices for the Soil Conservation Service, and is now a museum, leased from the county by the Bandera County Historical Commission. 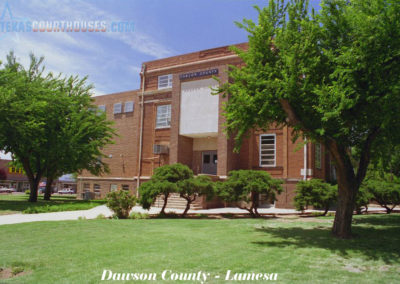